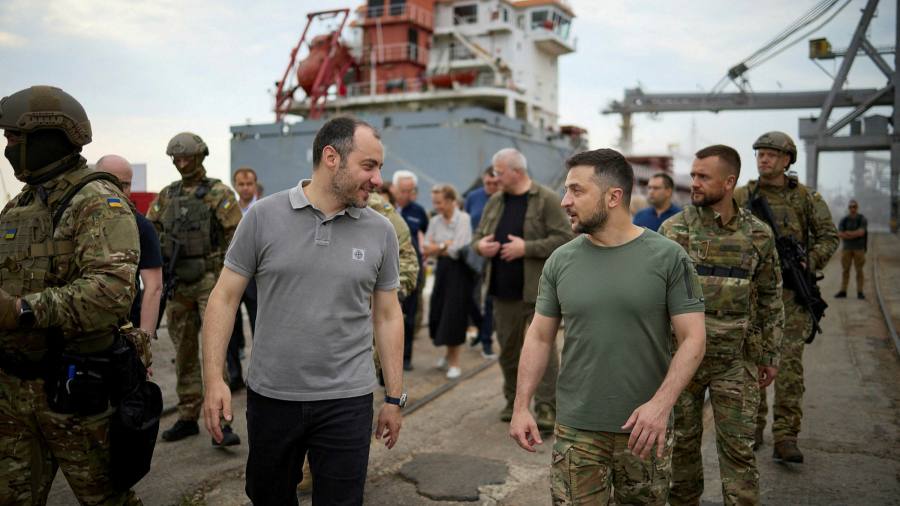 Ukraine’s president Volodymyr Zelenskyy visited the port of Chornomorsk on Friday, as grain vessels prepared to set sail from the Black Sea a week after a deal brokered by the UN and Turkey.

The return of large-scale grain exports from Ukraine to the global markets is crucial to alleviating the effect of a global food crisis exacerbated by the Russian invasion in February and its blockade of commercial sea routes.

Zelenskyy’s office said the export of grain would begin with the departure of several ships that had already been loaded but had not been able to set sail “due to the start of the [Russian escalated] war”.

More than 80 vessels have been marooned in Ukrainian waters since Russia launched a full-scale invasion of its neighbour on February 24, according to Kyiv officials.

The first vessels to leave Ukraine will be closely watched amid hopes they will be a harbinger of more grain exports into the international markets.

Known as the breadbasket of Europe, Ukraine is the world’s fifth-largest exporter of wheat. It accounts for 80 per cent of Lebanon’s wheat imports and is a major supplier for countries such as Somalia, Syria and Libya.

The imminent shipments come as insurers at Lloyd’s of London have agreed an insurance facility to cover grain and other foods shipped out of Ukraine. The policies agreed by Lloyd’s for Ukrainian exports cover $50mn per vessel, per voyage.

Insurers will be watching how the vessels navigate the Ukrainian ports, which have not been demined. Ukrainian “pilots” will guide the vessels from the ports before handing over to the crew.

Some grain traders are sceptical that the exports will continue to flow beyond the initial “showcase” cargoes. “A lot of ship owners are reluctant to bring their vessels into Ukraine as they are concerned that they may not be able to get out,” said one international trader.

A day after Moscow signed the deal allowing Kyiv to resume grain exports Russia claimed responsibility for a series of missile strikes that hit the key Ukrainian port of Odesa.

However, Chris McGill, head of marine cargo underwriting at Ascot, which is leading the insurance consortium, said insurers were pricing the deal on the basis that the agreement will hold. “We are desperately hoping that it will hold and there won’t be any attacks on the vessels. We can’t really price for something like that.”