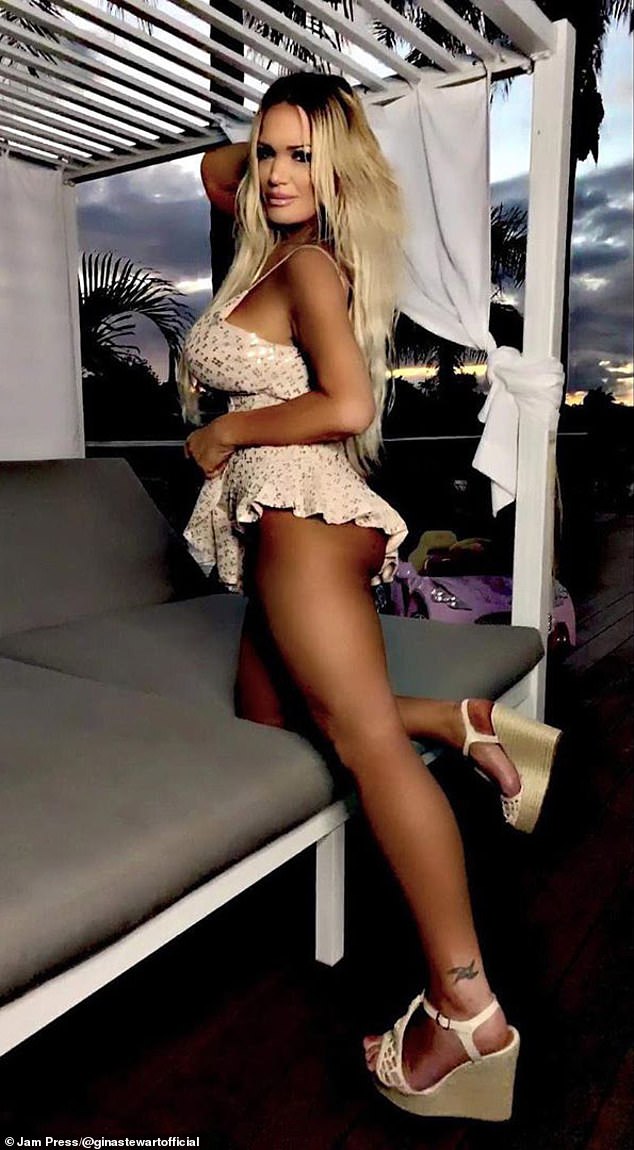 A model dubbed the ‘world’s hottest grandma’ has left social media users swooning after sharing summer bikini snaps of herself, as well as revealing her age-reversal tips – including one special ingredient that she swears by.

Gina Stewart, 51, from The Gold Coast, regularly hits the headlines due to her ‘youthful glow’, having even been compared to former Playboy model Pamela Anderson, who is just a few years older at 55.

The grandmother-of-one, who has 340,000 followers on Instagram, sets hearts racing by sharing revealing pictures online.

She has now revealed the secrets to her age-defying looks, from drinking coconut water and have a cold shower daily to trying cryotherapy to get rid of the traces of time.

Gina Stewart, 51, from The Gold Coast, has been dubbed the ‘world’s hottest grandma’ due to her ‘youthful glow’

The grandmother-of-one, who has an OnlyFan account, revealed the secret to her ag4e-defying looks

Gina, who has regularly been compared to Baywatch star Pamela Anderson, 55, said she swears by coconut water

According to Gina, drinking coconut water not only keeps her looking young but she also claims it can reduce the risk of heart disease and lower cholesterol, with the model referencing a study from 2008.

The model has at least one glass of the ‘liquid gold’ per day – especially during or after working out.

‘Personally, I choose to have a glass of coconut water a day especially during or after working out,’ she wrote.

‘The most beautiful woman in the world,’ one person wrote.’

#AussiePamelaAnderson,’ said someone else, followed by heart and fire emojis.

‘Nuthin like a magnificent pair of love pillows,’ added another user, likely referring to Gina’s ample bosom, hidden by the coconuts. [sic]

‘You get sexier literally every day, it’s crazy,’ one person wrote.

The model reveals she drinks one glass of coconut water a day, calling it ‘liquid gold’ and crediting it for her looks

Gina is used to wowing her fans online thanks to her looks, and revealed she also avoids sugar ‘like an enemy’ in order to keep her looks

Another person added: ‘Great advice from a sexy lady.’

The model, who has appeared in Maxim, has also revealed she avoids sugar where possible, calling the ingredient the ‘enemy’ and tells fans to read labels at the supermarket closely.

She said:'[…]..we have to be realistic, sometimes I do have a beer or a naughty slice of cake or chocolate etc but that is occasionally and not every day.

‘Remember you are what you eat and drink; if you eat that cheesecake or a box of chocolates or drink coke be prepared to wear it the next day, after time it adds up to an unhealthy you.

Gina, who has appeared in Maxim magazine, said she sometimes has a ‘naughty slice’ or a beer, but that this is not a regular occurrence

‘Treat yourself on special occasions and you will continue to enjoy the treats along the way.’

‘Try to avoid sugar as it’s your enemy and is hidden in everything today.

‘Read all the labels at your supermarket and be aware of fake food and it’s detrimental affect on your health short and long term.’

Previously, Gina has revealed that having a cold shower daily, alongside her aforementioned glass of coconut water, is the secret to stay looking youthful.

She also believes that this helps to speed up her metabolism, improves her hair and skin, as well as helping to reduce inflammation and muscle soreness.

Gina also used to undergo cryotherapy, the use of extreme cold to freeze and remove abnormal tissue.

In recent months, she’s claimed that there is a ‘dark side’ to fame and fortune as she’s reportedly been forced to leave her home after paparazzi found out her address.

She’s also opened up about her battles with anxiety, which made her fearful to leave her home due to ‘vicious’ online trolls.

Gina also admitted she used to undergo cryotherapy, the use of extreme cold to freeze and remove abnormal tissue.

She’s also opened up about her battles with anxiety, which made her fearful to leave her home due to ‘vicious’ online trolls