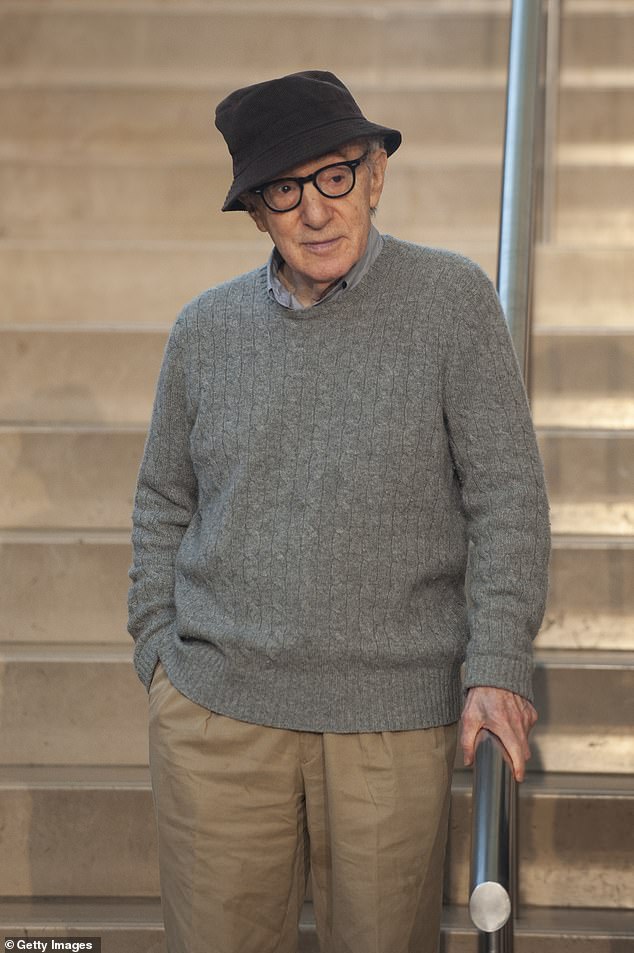 Woody Allen announced Sunday that he will be retiring from filmmaking after completing his 50th feature.

The 86-year-old actor, writer and director plans to retire from filmmaking to focus on writing, according to the Spanish newspaper La Vanguardia.

The director, who has denied sexual abuse allegations lodged against him by his daughter Dylan Farrow, is currently at work on his 50th and final film, titled Wasp 22.

The movie, which he compared to his late-career work Match Point, is being filmed entirely in French.

The end: Woody Allen announced Sunday that he will be retiring from filmmaking after completing his 50th feature; seen in 2019 in San Sebastian, Spain

Allen told the Spanish newspaper La Vanguardia that he wanted to spend his twilight years writing.

His swansong will be a film set in Paris and shot entirely in French. Production is set to begin in a couple of weeks.

The writer and director claimed the plot would be ‘exciting, dramatic and also very sinister’ and described is as something similar to the thriller Match Point, which won the Goya award for Best European Film in 2006.

The Blue Jasmine director has chosen to work in Europe in recent years due to falling support in the US amid allegations of abuse in the #MeToo era.

Swansong: Allen’s  swansong will be a film set in Paris and shot entirely in French. Production is set to begin in a couple of weeks.

His former partner, Mia Farrow, accused him of sexually abusing his adopted daughter, Dylan, when the girl was seven.  Allen had already shocked the public when it became known he had begun a romantic relationship with Farrow’s then 17-year-old adopted daughter Soon-Yi Previn.

Farrow and Allen were together for more than a decade, from 1980 to 1992 and made 13 films together before he and the Hannah and her Sisters star split and he took up with his step-daughter.

The director has always denied the allegations, and no charges were ever brought against him, although Dylan, 37, has never denied her claim of abuse.

Woody Allen and Mia Farrow with daughter Dylan and son Ronan Farrow in New York, 1988. Allen and Farrow were together for more than a decade and made 13 films together before their split

Abuse allegations:  Allen was accused of sexually abusing Dylan when she was seven years old. He has denied the charges, but Dylan has never recanted her story

He and Farrow had a total of three children together, Moses, 44, whom they adopted. Investigative journalist Ronan Farrow, 34, is their biological child.

Soon-Yi and Allen married in 1997 and have adopted two children together.

When the abuse allegations first came to the fore, they didn’t seem to hurt Allen’s career. Top actors including, Scarlett Johansson, Cate Blanchett, Owen Wilson, Rachel McAdams and Kathy Bates continued to work on his films.

Allen began his career as a comedy writer in the 1950s and 60s. He made his directorial debut in 1966 with What’s Up Tiger Lily, a spy spoof in which he also acted.

He won a Grammy for his comedy record Woody Allen in 1964.

The writer and director turned away from slapstick comedies to more adult themes in the 1970s  and won three Oscars for Annie Hall – Best Picture, Best Director and Best Original Screenplay for the romantic comedy about a divorced man and an aspiring nightclub singer.  Keaton, his former girlfriend, earned the Academy Award for Best Actress for her role as the title character.

In 1979, he released Manhattan, co-starring Mariel Hemingway. The film was about a divorced television writer dating a 17-year-old girl.  The film was nominated for a Best Screenplay Oscar and Hemingway earned a Best Supporting Actress nod.

In her memoir, Out Came the Sun, Hemingway claimed the director invited her to Paris once she turned 18, two years after they had worked on Manhattan. ‘Our relationship was platonic, but I started to see that he had a kind of crush on me, though I dismissed it as the kind of thing that seemed to happen any time middle-aged men got around young women.’ The actress said she turned down the trip once she realized she would not be getting her own room.

In hindsight, Sorvino, 54, claimed the experience tainted her career, revealing on the WTF podcast in March she ‘should have denounced’ the director following the sexual abuse allegations.

‘I didn’t look deep enough to actually educate myself to really make an educated opinion at the time. It’s not an excuse…. it ruins Mighty Aphrodite for me, ruins my Oscar, ruins that start of my career, because I treasured it for years and then it’s like, I should have denounced him. I should have known it then.’

Tainted: Sorvino, 54, has claimed the experience is ‘tainted’ for her and she should have denounced Allen following allegations he sexually abused his daughter