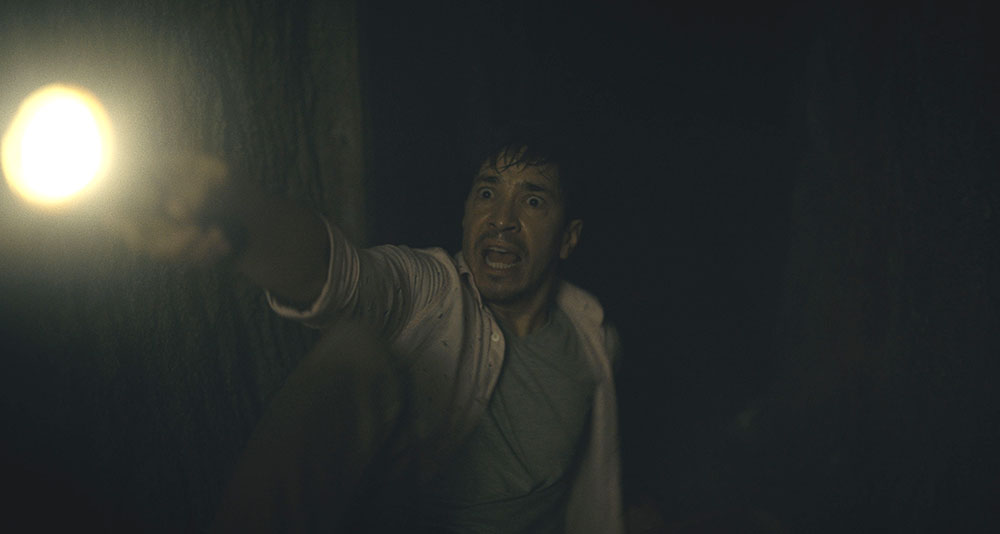 Judging from the trailer, or the poster, Zach Cregger’s Barbarian seems to follow a classic horror movie premise, updated for the tech age: A young woman checks in to an Airbnb in Detroit, only to find a man — and assorted terrors — waiting inside. But that’s just a fraction of the story.

Halfway through the film, which opened at No. 1 for the Sept. 9-11 weekend, writer-director Cregger abruptly cuts away from a gasp-inducing moment, jumping from dank Detroit to sunny L.A., where a hotshot actor played by Justin Long is cruising in a convertible without a care in the world. That is, until he gets a call from his agent telling him he’s been accused of sexual misconduct in The Hollywood Reporter.

“When I was writing, my dream was to use The Hollywood Reporter but it was one of those things that you assume will never be able to happen and it would’ve been sad for me to manufacture some sort of fictional approximation,” Cregger explained to THR recently over Zoom. “And one of the benefits of having competent producers is that they said, ‘Why don’t we see if we can get the real deal?’”

To Cregger, the real deal was not only using THR but also the byline of editor-at-large Kim Masters, whose name is visible atop the expose penned about Long’s character.

“Having Kim Masters as the author of the article is the ultimate. Kim has just been way ahead of the curve on exposing the toxic nature of the power dynamic that’s at play in Hollywood when it comes to men and sexual misconduct,” Cregger explains of the veteran journalist and host of KCRW’s The Business who has published exposes on Fred Savage, Amazon’s Roy Price, Warner Bros.’ Kevin Tsujihara, Sex and the City’s Chris Noth, and more. “She’s been very locked into [these stories] since before it exploded a couple of years ago. I think that is very commendable.”

Because of her work, Cregger says that seeing or hearing the name Kim Masters sparks a reaction. “There are a lot of people terrified of her and a lot of people who really admire her. She’s earned this place in our culture and she deserves a lot of credit for what she’s done. Personally, to have her name in this movie for me is like a tip of the hat for what she’s done. And a thank you to Kim Masters.”

What about Long’s character? Cregger insists he created him based on an amalgam of people he’s known. By casting Long, a beloved actor best known for his comedy chops, he wanted to play with expectations in a way that’s similar to seeing Georgina Campbell’s character welcomed inside the Airbnb by Bill Skarsgård, well known for playing villains like the monster clown in the blockbuster It.

“We all have this preconceived idea of what a predator looks like and I wanted to explore that a little bit,” Cregger says. “Bill is a perfect casting for the role of Keith because he has a long established history of being a literal monster on film. It is the biggest horror movie of all time and he’s the clown so when you see him, you know that’s an evil person, right? The audience is prepared to be afraid of him or to suspect that he’s got some sort of ulterior motive.”

As such, Cregger gave very limited direction to Skarsgård. “My only direction to Bill, from the beginning, was, ‘Don’t do anything creepy.’ We leaned into him from the good guy zone even though he did have all these micro-aggressions. Then, when it came time to cast A.J., at first I was thinking of it as some sort of low-hanging fruit. Let’s cast someone like Zac Efron who has the jawbone, haircut and biceps, an actor who is very alpha. But I was just wasn’t thinking deeply enough about it.”

Barbarian is now in theaters.

This story first appeared in the Sept. 16 issue of The Hollywood Reporter magazine. Click here to subscribe.