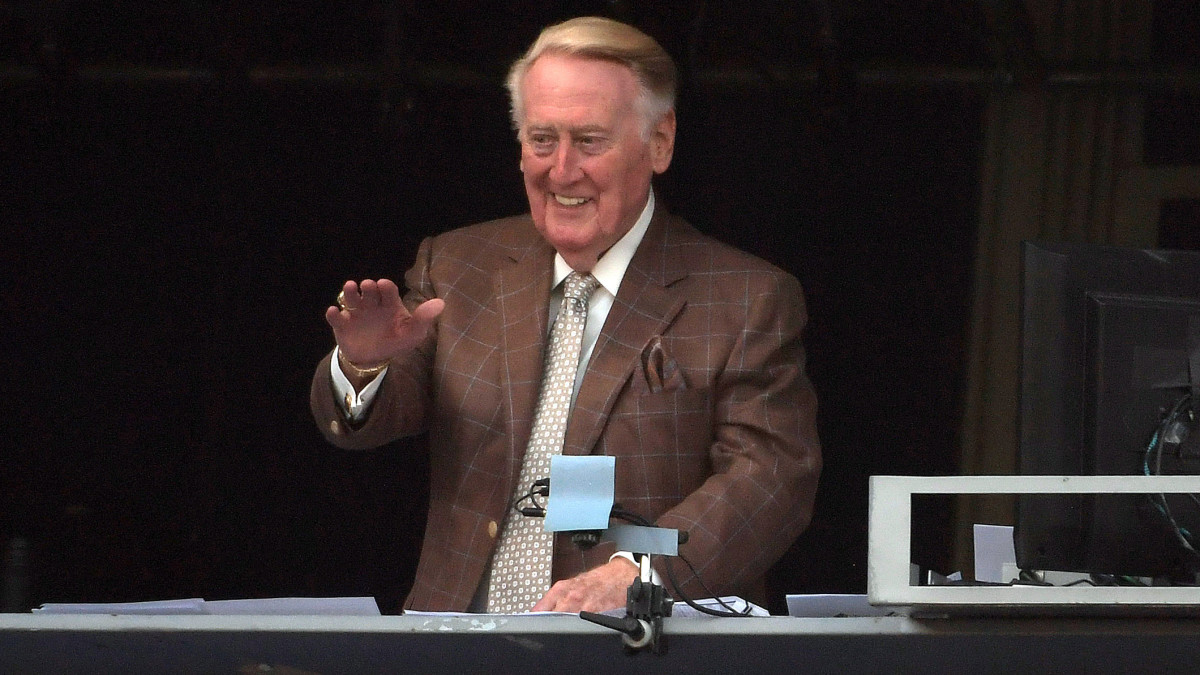 1. Vin Scully was all about words, but there really aren’t any words to sum up his standing as a Major League Baseball broadcaster.

Everyone knows Scully is the GOAT when it comes to baseball play-by-play announcers. The voice, the pacing, the style, the details, the smoothness. Nobody did it better.

You’ll hear and read today all the accomplishments: Broadcasted games for 67 years, called 18 no-hitters, three perfect games and a slew of memorable moments.

What may be even more impressive than being the greatest baseball voice of all time was how beloved Scully was by the masses. He is legitimately the only sports figure who I’ve never seen anyone say a negative word about on Twitter.

In fact, the only criticism I can think of about Scully is actually a positive. We wanted more Scully, but he refused for selfless reasons.

During the ninth inning of Scully’s final game on Oct. 2, 2016, he said, “Don’t be sad because it’s over. Smile because it happened.”

Everyone associated with baseball wanted more to happen when it came to Scully.

He officially turned down an offer from Fox Sports to be part of its MLB All-Star Game coverage in 2016, saying, “I don’t want to just take a bow. I just don’t feel right doing that.”

In 2018, with the Dodgers in the National League Championship Series, Fox and then play-by-play man Joe Buck wanted Scully to join the booth.

“It’s not false modesty,” Scully said. “I just think I don’t belong there. Those fellows have been broadcasting all year. I don’t want to get into their spotlight in any way, shape or form. I think they’re doing a wonderful job.”

And that’s all you need to now about the legendary Vin Scully.

2. One of my Sports Illustrated career highlights was interviewing Scully on my old “Hot Clicks Podcast” in 2012. Unfortunately, the podcast doesn’t exist anywhere anymore, but here is a recap of Scully telling me that he once considered taking a job with the New York Yankees.

3. The way this call builds from, “little roller up along first,” to “THE METS WIN IT!” is perfection.

4. Scully’s single-greatest call is either the Mookie Wilson clip above or Kirk Gibson’s stunning home run in Game 1 of the 1988 World Series. You can’t go wrong with either one you choose as the best.

5. What some people often forget is that Scully also had the call of Joe Montana’s touchdown pass to Dwight Clark in the 1981 NFC Championship Game simply known as “The Catch.”

6. This 2013 Padres-Dodgers brawl was made even better by Vin Scully calling every detail.

7. Scully didn’t just call the action on the field. He noticed everything going on in the ballpark. He even once did straight play-by-play of a Hot Foot.

8. Scully tried to translate the tirade that then-Rockies manager Jim Tracy unleashed on umpires during a 2012 game by telling us that Tracy was saying “bleeping fertilizer” a lot.

9. If you ever wanted to know about the history of beards–not beards in baseball, but beards in general–Scully was there to give you a lesson.

10. Scully once had fun with Twitter during a game and was blown away that he was able to get something to trend.

Be sure to catch up on past editions of Traina Thoughts and check out the Sports Illustrated Media Podcast hosted by Jimmy Traina on Apple, Spotify or Google. You can also follow Jimmy on Twitter, Instagram and TikTok.