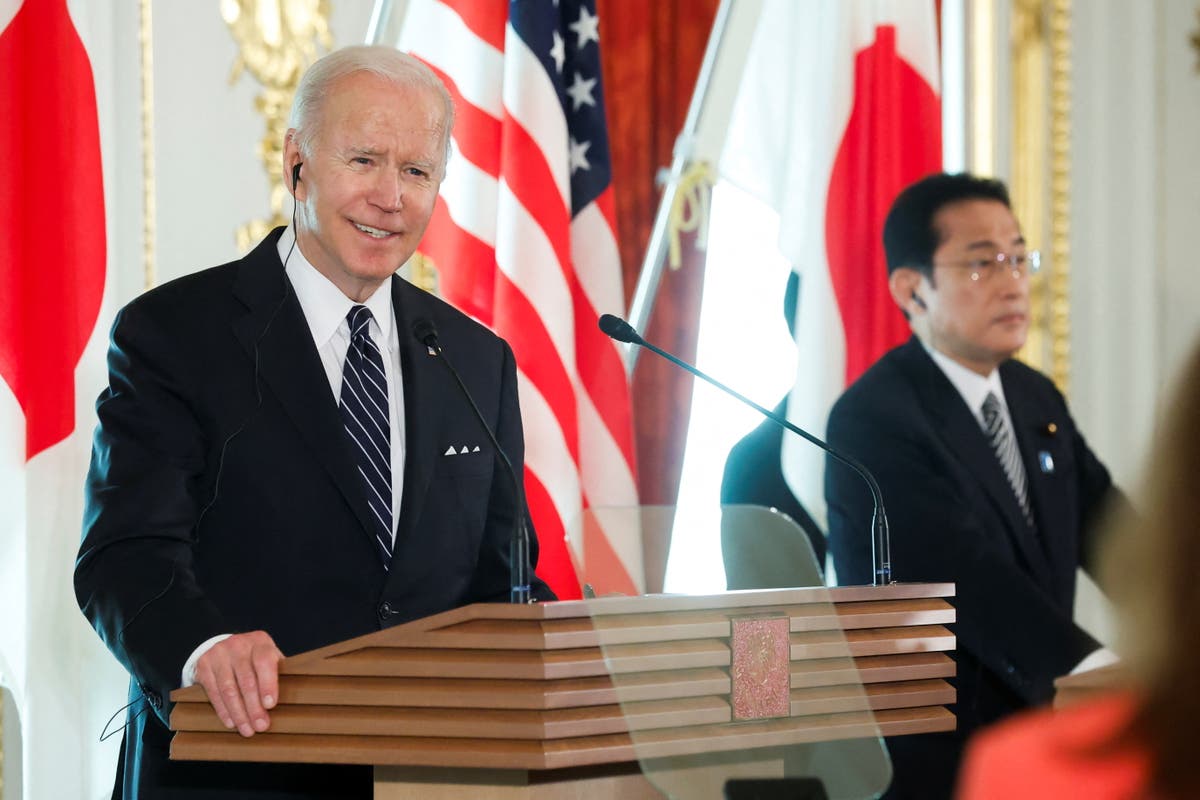 The US will intervene with military force if China moves to invade Taiwan, Joe Biden said on Monday during a visit to Tokyo, in one of the strongest statements of support for Taipei in decades.

On his first trip to Asia during his presidency, Mr Biden said the burden to safeguard the self-ruled island had become “even stronger” following Russia’s unprovoked invasion of Ukraine.

“That’s the commitment we made,” Mr Biden said in a press conference, adding that any effort by China to use force against Taiwan would “just not be appropriate”.

Such an attack “will dislocate the entire region and be another action similar to what happened in Ukraine”, Mr Biden said.

His comments in Tokyo appeared to be a departure from America’s existing policy of “strategic ambiguity” on its position regarding Taiwan, whereby the US has promised to support the government in Taipei but does not explicitly state what it would do in the event Taiwan came under attack.

Washington says it adheres to a “One China Policy” that means it only has formal diplomatic relations with the government in Beijing, while it maintains informal discussions with Taiwan.

Beijing, meanwhile, espouses the “One China Principle” — that China is a single entity which encompasses all disputed territories including Taiwan. President Xi Jinping has previously vowed to regain control over Taiwan — which has been self-governed since after the Second World War — and has not ruled out using force to do so.

Soon after Mr Biden’s statement, a White House official said that there is no change in US policy on Taiwan.

China has intensified military provocations in the past year, flying record numbers of planes into what Taiwan claims as its airspace. Taipei has called the manoeuvres an act of intimidation, ultimately designed to force it into accepting unification with mainland China.

Mr Biden said these tactics are dangerous. “They’re already flirting with danger right now by flying so close and all the manoeuvres that are undertaken,” Mr Biden, referring to China.

He said the US expects that China would not seize Taiwan by force but added that assessment “depends upon just how strong the world makes clear that that kind of action is going to result in long-term disapprobation by the rest of the [international] community”.

He said to deter China from its aspirations of taking over Taiwan it is necessary that Russian president Vladimir Putin “pay a dear price for his barbarism in Ukraine”, showing China and other nations that such actions are not acceptable.

The strong comments against China are likely to infuriate Beijing, which has previously condemned Washington for “external interference and provocations” on the Taiwan issue.

The statement is the most outspoken so far of Mr Biden’s Asia visit, which began last week in South Korea and includes meetings with the leaders of Japan, India and Australia, members of the “Quad” group of countries.

Also on Monday, the US president announced the launch of a new trade pact dubbed the Indo-Pacific Economic Framework, or IPEF. The pact includes 13 member states that account for 40 per cent of global GDP — Australia, Brunei, India, Indonesia, Japan, South Korea, Malaysia, New Zealand, the Philippines, Singapore, Thailand, Vietnam and the US.

It is being touted as a replacement for the Trans-Pacific Partnership (TPP), from which Washington dropped out in 2017 under then-president Donald Trump.

The IPEF pact, which would allow the US to work more closely with Asian economies on issues such as supply chains, digital trade, clean energy and anti-corruption, does not include Taiwan.

Critics of the framework say it has major limitations, including a lack of incentives to prospective partners such as lowering tariffs or providing greater access to US markets, which make it a poor competitor to the TPP. The details still need to be ironed out, however, with Monday’s launch representing only the start of talks that are expected to take 12 to 18 months.

Meanwhile, Japanese prime minister Fumio Kishida expressed gratitude to Mr Biden for his support for its bid to join a reformed UN Security Council as a permanent member.

“President Biden expressed the necessity of reforming and strengthening the United Nations, including the Security Council, which bears a major responsibility for the peace and security of the international community,” Mr Kishida said.