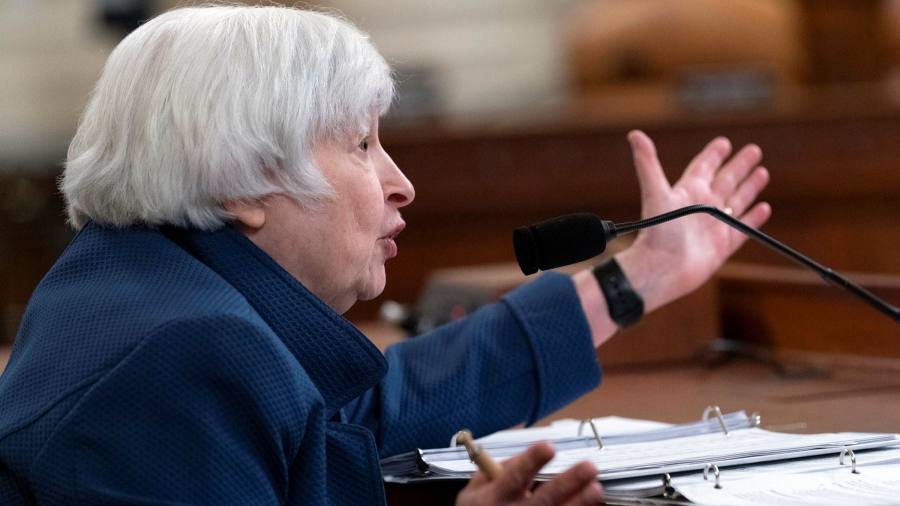 US Treasury secretary Janet Yellen said on Sunday that she expected the economy to slow but that a recession was not “at all inevitable”.

“I expect the economy to slow, it’s been growing at a very rapid rate as the labour market has recovered and we’ve reached full employment,” Yellen said on ABC’s This Week. “We expect a transition to steady and stable growth but I don’t think a recession is at all inevitable.”

She said US president Joe Biden’s top priority is to bring inflation down, which she reiterated was “unacceptably high”.

The US Federal Reserve kicked up its response this week. raising its main interest rate by a historic 0.75 percentage points, the first time it has done so since 1994.

The Fed has also set the stage for much tighter monetary policy in the near term, with officials projecting rates to rise to 3.8 per cent in 2023 and most of those increases scheduled for this year. They now hover between 1.50 per cent and 1.75 per cent.

On Saturday, Fed governor Christopher Waller said he would support another 0.75 percentage point interest rate rise at the central bank’s next meeting in July if, as expected, data showed that inflation had not moderated sufficiently.

Fed chair Jay Powell has said his goal is to bring inflation down while maintaining a strong labour market.

The Treasury secretary said that while there was month-to-month volatility in consumer spending, overall it remained strong and she did not expect a drop off in spending would cause a recession.

“It’s clear that most consumers, even lower-income households, continue to have buffer stocks of savings that will enable them to maintain spending,” she said. “I don’t see a drop off in consumer spending is a likely cause of the recession in the months ahead.”

The labour market also remained strong, she said, with two job openings for every unemployed worker.

Yellen reiterated the Biden administration’s argument that Russia’s war on Ukraine was partly to blame for high inflation because it boosts global food and energy prices. Supply chain snarls from lockdowns in China are also contributing, she said. Though these factors will not change immediately she said she expected inflation to go down.

“I do expect in the months ahead that the pace of inflation is likely to come down, although, remember there are so many uncertainties relating to global developments,” she said.

Biden is also looking to reduce gas prices, and senior administration officials said on Sunday that the US was weighing a temporary pause on the federal gas tax.

Yellen said it was “an idea certainly worth considering” and that Biden was looking to work with Congress to try to bring gas prices down.

Energy secretary Jennifer Granholm said on CNN that the Biden administration was evaluating a proposal for a gas tax holiday.