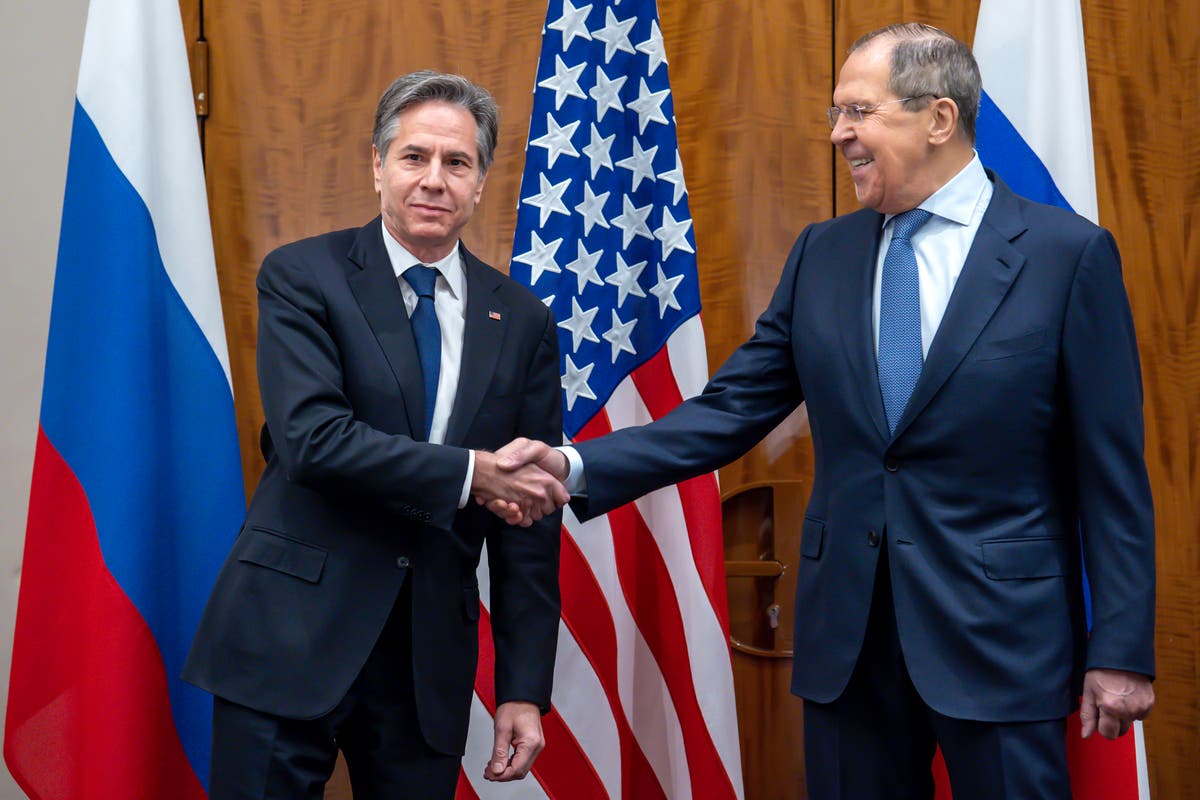 US warns of ‘united, swift and severe response’ if Russia invades Ukraine-.mp4

Moscow would face a “swift, severe and a united response” if it invaded Ukraine, US secretary of state Antony Blinken warned as talks with Russia’s foreign minister broke up with no breakthroughs.

The pair agreed to keep up diplomatic contacts, and Mr Blinken described the talks with Sergei Lavrov as frank and useful.

He said Washington had agreed to provide a written response to Russia over its demands for a pledge that Ukraine will never join Nato.

Russia has bolstered its military deployment on the border with Ukraine to 106,000 troops, as well as air and sea power, according to western and Ukrainian officials.

Mr Blinken said Mr Lavrov had repeated Russia’s insistence that it has no plans to invade Ukraine but stressed that the US and its allies were not convinced of that. “We’re looking at what is visible to all, and it is deeds and actions and not words that make all the difference,” he said.

Nato has rejected Russian demands to withdraw its forces from Romania and Bulgaria.

Nato rejects Moscow’s call to withdraw from Romania and Bulgaria

Nato has rejected Russian demands to withdraw its forces from Romania and Bulgaria as diplomatic efforts continue to prevent a war in Europe.

“Nato will not renounce our ability to protect and defend each other, including with the presence of troops in the eastern part of the alliance,” Nato spokesperson Oana Lungescu said in a statement.

Moscow has demanded legally binding guarantees from the organisation that the bloc will stop its expansion and return to its 1997 borders.

Earlier, the Russian foreign ministry said the security guarantees that Moscow seeks from the west include provisions requiring Nato forces to leave Romania and Bulgaria.

Replying to a question about what that would mean for Bulgaria and Romania, which joined after 1997, the ministry said Russia wanted all foreign troops, weapons and other military hardware withdrawn from those countries.

Nato rebuffed these demands, saying they would create first- and second-class Nato members, which the alliance could not accept.

“We reject any idea of spheres of influence in Europe. We will always respond to any deterioration of our security environment, including through strengthening our collective defence,” the spokesperson said.

“Nato is vigilant and continues to assess the need to reinforce the eastern part of our Alliance.”

White House officials say they have told Congress of plans to send Mi-17 helicopters to Ukraine.

The administration will put in writing the serious concerns allies have about Russia’s actions, as well as ideas for how to strengthen the two nations’ sense of security, said White House Press Secretary Jen Psaki.

“We have said from the beginning that there are certain proposals that will not be viable,” she said.

When asked whether Joe Biden would meet Vladimir Putin and Ukraine’s President Volodymyr Zelensky, she said any invasion of Ukraine would be met with “swift and severe consequences” along with allies, but that they were ready to continue diplomacy.

“Of course, the president always values leader-to-leader engagement but we’ll determine if that’s the appropriate next step,” she said. “I can’t give you a prediction of if and when it will happen but if that is a step that is recommended and that we think would be effective at this point in this discussion. Of course the president is always open to leader-to-leader engagement.”

Next steps in diplomacy

Here is what to look out for next in the Ukraine crisis. Summary from Reuters:

Secretary of State Antony Blinken said the US side would respond in writing next week to a set of security proposals that Russia presented in December, including a demand to bar Ukraine from ever joining Nato. A formal rejection could provide Russia with a pretext to move ahead with the unspecified military response it has threatened. Tatiana Stanovaya, head of political analysis firm R.Politik, said Moscow needed a written US reply “as cast-iron proof of a refusal to provide Russia with security guarantees. This is partly a trap, of course, because any such written response will be used to discredit the U.S. negotiating position”.

In the past week, Russia has moved troops and equipment thousands of miles from its far east region to Belarus to take part in what it calls joint exercises. As Belarus borders Ukraine, this opens a new front for a potential Russian attack and ensures that diplomacy in the coming weeks will take place against the background of an ongoing show of Russian military force.

Russia’s parliament will hold consultations next week on an idea to appeal to Putin to recognise two pro-Russian breakaway regions in eastern Ukraine as independent states. That would be a major escalation that would kill off diplomatic efforts and could serve as a legal pretext for Putin to send in troops to “protect” Russians there from Ukraine. Officially the Kremlin has reacted coolly to the parliamentary proposal so far, but it adds to Putin’s available options and keeps the West guessing as to his true intentions. Tension remains high in and around the breakaway regions, where the United States has said Russia is plotting acts of provocation to create a pretext for invasion. Russia accuses Ukraine of planning to retake the areas by force, which it denies.

The French and German foreign ministers are expected to visit eastern Ukraine in a further show of solidarity with Kyiv. French President Emmanuel Macron said the European Union, which has been largely sidelined in the crisis, should open its own track of diplomacy with Moscow. And Turkey’s President Tayyip Erdogan says he wants to bring together the Ukrainian and Russian presidents and plans to visit Ukraine in early February. Russia, however, says it wants to move fast and is not prepared to let talks drag on indefinitely.

The US is considering evacuating the families of diplomats from Ukraine, Bloomberg News reports.

Family members would have to return home and non-essential employees would have the option to leave Ukraine, it said. A source told the outlet that the announcement could come within days.

About 180 Americans and 560 Ukrainians work for the embassy in Kyiv, not including their family members. Eric Garcia reports:

Russia ‘has a choice’

Antony Blinken has reiterated that Russia has a choice, saying the US preferred diplomacy.

Canada will offer Ukraine a loan of up to C$120million (£70m) and is looking at other ways to support Kyiv, the country’s Prime Minister Justin Trudeau says.

“(It) is one of the top things that the Ukrainian government has been asking for from Canada.”

Mr Trudeau reiterated his condemnation of Russia’s moves to build up troops near the Ukrainian border, saying “any movement of Russian troops into Ukraine will be absolutely unacceptable and met with a clear response from the international community”.

Ottawa is also exploring other options to provide financial and other supports, he said, but sidestepped questions about whether Canada would send weapons to Ukraine.

Occupying Kharkiv would be start of large-scale war – Zelenskiy

Russia may try to occupy the industrial city of Kharkiv if it takes military action in Ukraine, which would be the start of a “large-scale war”, Ukrainian President Volodymyr Zelenskiy told The Washington Post.

Kharkiv, in eastern Ukraine, is the former Soviet republic’s second biggest city and lies 26 miles from the border.

“I will say realistically if Russia decides to enhance their escalation, of course they are going to do this on those territories where historically there are people who used to have family links to Russia,” Zelenskiy said.

“Kharkiv, which is under Ukraine government control, could be occupied. Russia needs a pretext: They will say that they are protecting the Russian-speaking population.”

He said he believed this scenario was feasible following Russia’s annexation of Crimea from Ukraine in 2014.

“It’s not going to be just an occupation; it’s going to be the beginning of a large-scale war,” he said.

Russia, which has tens of thousands of troops near the border, has denied it plans to attack Ukraine.

Kharkiv, which has a population of about 1.4 million, was the capital of Ukraine from 1919 to 1933, when it was part of the Soviet Union, and is home to tank and tractor factories, as well as electronics producers.

Nato members Estonia, Latvia and Lithuania will provide Ukraine with US-made anti-armour and anti-aircraft missiles, their defence ministers have said in a joint statement.

“Estonia, Latvia and Lithuania and their allies are working together expeditiously to hand over the security assistance to Ukraine,” the statement said.

The US State Department has cleared Lithuania, Latvia and Estonia to send US-made missiles and other weapons to Ukraine, three sources said on Wednesday.

Russia’s foreign ministry said Moscow was seeking the withdrawal of Nato forces and weapons from Romania and Bulgaria.

Bulgarian prime minister Kiril Petkov responded by telling parliament: “Bulgaria is a sovereign country, which made its choice long ago by becoming a Nato member.” Holly Bancroft reports:

Why Russia wants to block Ukraine from joining Nato

Ever since 1990, Vladimir Putin has nurtured a grudge against what he sees as Nato’s gradual extension eastwards, keen to foster anti-western sentiment at home and consolidate his power base.

He claims the alliance is a provocation, and with the invasion of Georgia, which had openly courted membership, he humiliated the country’s leader. This analysis from Joe Sommerlad: