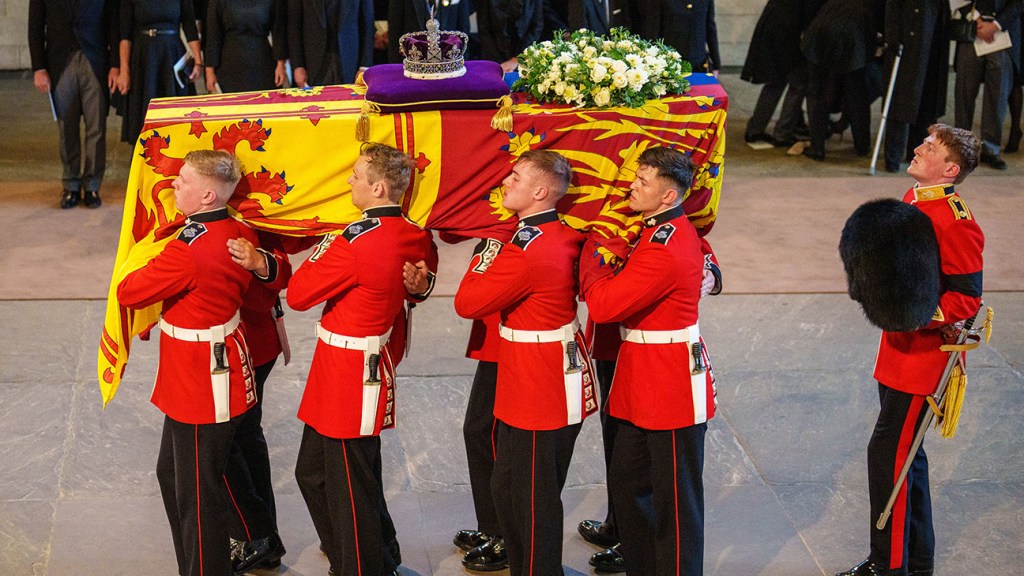 The funeral of Queen Elizabeth II on Monday, September 19 is shaping up to be a global spectacle. World leaders, including President Biden, will be in attendance, and the world’s media will be there too.

The Queen’s funeral will be the first time such an event has been broadcast on television. In 1952, when Queen Elizabeth ascended to the throne, the funeral procession of King George VI was televised in the U.K., but the funeral itself remained private. Not so this time.

While the BBC will be the official broadcaster of the proceedings, every U.S. TV news organization will be in attendance, flying in many of their top anchors and blowing up their typical programming lineups to carry it live.

Good Morning America anchor Robin Roberts and World News anchor David Muir will lead ABC’s coverage beginning at 5:30 AM Monday. They will be joined by ABC team of correspondents and contributors.

CBS Mornings anchor Gayle King and Evening News anchor Norah O’Donnell will lead CBS’ coverage from London, which will air on the broadcast network and stream for free online.

NBC will have Today anchors Savannah Guthrie and Hoda Kotb, as well as Nightly News anchor Lester Holt in London leading coverage of the funeral from Westminster Abbey beginning at 5:30 AM ET. Holt will also anchor Nightly from London that evening.

NBC will have anchors, contributors and correspondents spread across the U.K., including Tom Llamas, Keir Simmons, Kelly Cobiella and Molly Hunter, as well as Wilfred Frost, Daisy McAndrew and Andrew Roberts.

The broadcast will air on NBC, and stream on NBC News’ streaming platforms.

Fox has anchor Martha MacCallum leading coverage from London, which kicks off at 4 AM Monday, pre-empting Fox & Friends. MacCallum will be based at The Canada Gate at Buckingham Palace, and will be joined on set by Fox & Friends anchor Ainsley Earhardt and TalkTV host Piers Morgan.

CNN anchors Anderson Cooper and Erin Burnett will lead CNN’s coverage from London, beginning at 5 AM. They will be joined in London by Christiane Amanpour, Max Foster and Richard Quest, with Don Lemon joining from New York.

The cable news channel will also have correspondents across London, from Westminster Abbey and Windsor Castle to the parade route.

Coverage will stream live, without the need for a cable subscription.

MSNBC’s coverage of the funeral will begin at 3 AM, led by Chris Jansing in London. Starting at 5 AM, Joe Scarborough, Mika Brzezinski, Willie Geist and Katty Kay will anchor a special edition of Morning Joe from London.

Jansing, Katy Tur and Andrea Mitchell will take over coverage at 10 AM.

If American viewers want the same coverage that TV viewers in the U.K. will be seeing, PBS will be simulcasting the BBC’s uninterrupted coverage of the Queen’s funeral, beginning at 4 AM. PBS will also air the BBC’s primetime special The State Funeral of HM Queen Elizabeth II: Events of the Day, beginning at 8 PM.