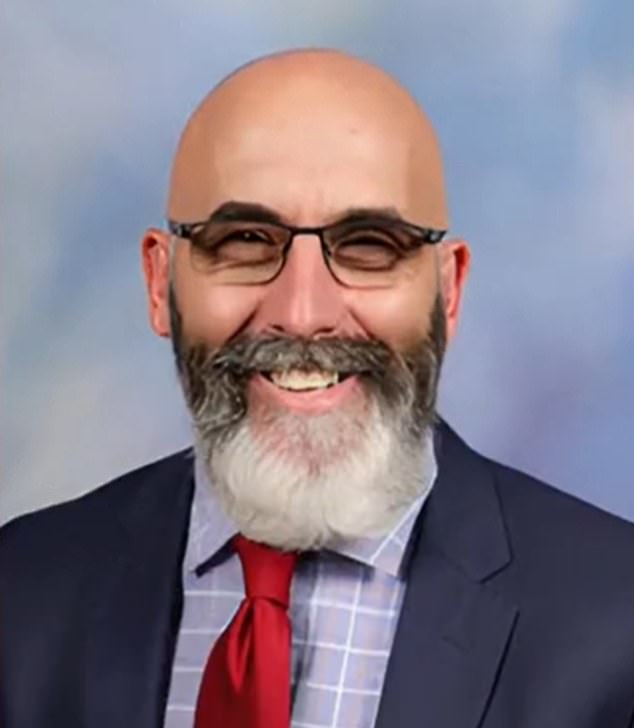 The family of an assistant principal who watched one of his students die on an overseas school trip is suing the state of Victoria, claiming the trauma caused him to suffer a fatal heart attack two years later.

Timothy Fehring, 15, died on July 28, 2019, while on a European excursion with 16 classmates and two teachers from Melbourne‘s Blackburn High School.

The teenager had vomited multiple times and had complained of feeling unwell immediately after landing on July 23.

He unknowingly developed an infection in his blood and lungs that turned into sepsis and he died just six days later.

Assistant principal Geoff Vezey, 52, was at a doctor’s office in Vienna with Tim on the day he died.

He found Tim unresponsive on the floor of the office after the teenager went to wait outside in the hallway, covered in vomit with blood dripping from his nose.

Assistant principal Geoff Vezey, 52, died in April last year. He had witnessed one of his high school students die on a school trip to Europe and suffered trauma from the incident

Tim was rushed to hospital but died shortly after.

Mr Vezey later suffered a heart attack and died in April last year at his home in Ringwood East.

The teacher had struggled to move on from the teenager’s death, and suffered post traumatic stress disorder, anxiety, depression and panic attacks, according to court documents, the Herald Sun reported.

The acute psychiatric injury ‘was a significant contributing factor’ to Mr Vezey’s death, the documents alleged.

The Vezey family sought compensation from the state but it was rejected in January of this year.

They are now hoping to take the matter to the County Court for a judge-alone trial.

Tim Fehring (pictured) died on July 28, 2019 on the sixth day of a school trip across Europe. It was revealed that he had developed an infection in his blood and lungs that turned into sepsis

Heartbreaking details about the lead up to Tim’s death were revealed earlier this month in a coroner’s report.

The 15-year-old had texted his mother telling her he hadn’t slept ‘in hours’ and was ‘always feeling dizzy’ since arriving in Europe.

Over the course of six days of the trip, Tim lost 5kg, threw up repeatedly in roadside bins and struggled to walk.

However, the two teachers accompanying the students on the holiday believed he was simply suffering from homesickness, rather than being seriously ill.

His family have released messages showing how Tim informed his mother, Barbara, not long after arriving in Berlin on June 23 that he was feeling unwell.

His condition was initially chalked up to the spicy food he was given to eat on the Thai Airlines flight he was on.

‘I almost threw up and am working on getting better so I can have a better time,’ he texted his mum.

In his next message Tim said: ‘I’m going to sleep like a baby because it might be exhaustion.

‘I have not slept in hours and I always feel dizzy.’

As the days went on and the group travelled from Germany to Vienna, Tim’s condition grew worse.

Coroner Simon McGregor said staff should have ‘sought, and then followed, medical advice about Tim’s wellbeing’ during the excursion.

He also said that school staff should have kept an open mind about what he was suffering from, with teachers suggesting to doctors it may just be homesickness.

Tim was taken to Munich Children’s Hospital on day four of the excursion and was  examined by a doctor.

But the doctor said constipation and homesickness was likely the reason for his vomiting and suggested Tim drink water and eat fruit to ‘feel better’.

On the day he died he was taken to another doctor where he was given a prescription for anxiety medication and deemed fit to fly home. No physical tests were carried out that day.

Coroner McGregor said the doctor needed to do a physical exam to examine other possible reasons for Tim’s illness.

‘Dr Schrems should have conducted a physical examination, including taking of blood pressure or use of a stethoscope, for a first-time patient prior to writing a script for anxiety medication,’ the report said.

Tim (pictured) departed for Europe from Melbourne with his fellow students and two teachers. He arrived in Berlin on June 23 and began to immediately feel sick

Coroner Simon McGregor had made two recommendations to the Department of Education and Training including increasing staff numbers on overseas trips and review excursion policies. Tim’s school, Blackburn High School, accepted the changes (pictured, Tim with his sister)

Coroner McGregor found that the teaching staff had made the ‘wrong judgment’ in treating Tim.

He recommended an increase in staff numbers attending overseas trips and a review of excursion policies.

The coroner outlined how increasing the ratio of staff to students would give chaperones ‘more flexibility’ to manage remaining students if someone fell ill.

The education department accepted the recommendations and have already increased staff numbers for excursions.

Tim’s mother Barbara Fehring said her son was a happy and healthy child who couldn’t wait to go on the trip, but added nobody listened to him when he tried to tell him how unwell he was.

‘The people in charge thought he was homesick but he wasn’t. He couldn’t wait to go away, but he didn’t like making a fuss,’ she told Daily Mail Australia.

‘He was a very fit, healthy and energetic kid who was always happy and always wanted to make those around him happy.’

The Coroner’s report said the 15-year-old was vomiting on the first day the group arrived in Berlin.

On the second day, Tim woke up with stomach cramps and after not eating he vomited at lunchtime, and again at dinner.

Teachers initially thought he was suffering the effects of jetlag, different food, the heat, and a change in climate.

They had informed his mother he was feeling sick but suspected it was due to being homesick, the coroner’s report said.

On June 26, he woke up early and texted his mother asking her to bring him home.

‘He expressed dissatisfaction about how he was being treated and disbelieved about his sickness,’ the coroner’s report said.

Teachers initially thought Tim (pictured with his father) was suffering the effects of jetlag, different food, the heat, and a change in climate

His mother Barbara spoke to one of the teachers and said Tim needed to see a doctor.

He was eventually taken to Munich Children’s Hospital after going on a walking tour where he appeared ‘exhausted, visibly pale and had noticeably lost weight’.

‘(One of the teachers) mentioned to the doctor that Tim was homesick, and the doctor confirmed that his symptoms could be connected to this,’ the coroner’s report said.

Tim was at the hospital for between four and six hours, and the doctor said constipation and homesickness was likely the reason for his vomiting.

The following day the group travelled to Austria and went on another walking tour.

‘Tim walked around carrying a ‘vomit bag’ although he asked not to go at all,’ the coroner’s report said.

‘He had not improved and was walking slowly and looked puffed out and tired. He was pale and had black circles under his eyes.

‘Tim had told the staff that he wanted to go to hospital, but staff considered that he was trying to avoid doing the planned activities such as the afternoon’s walking tour.’

Ms Fehring said she couldn’t understand why Tim wasn’t taken to hospital on June 27, despite telling the teachers he was feeling so terrible.

‘The teachers didn’t know him, they never taught him so they didn’t know that Tim didn’t put things on,’ she said.

On the evening of June 27, staff decided Tim would fly home alone as his condition had not improved.

The next day, on June 28, Tim was taken by Mr Vezey to get a doctor’s certificate to confirm he was able to travel.

While he was there, Tim was not examined or given any tests and the doctor was told to prescribe him anxiety medication at the request of one of the teachers, the coroner’s report said.

The doctor also deemed Tim fit to travel. (Ms Fehring said he was not).

On the evening of June 27, staff decided Tim would fly home alone as his condition had not improved

While Mr Vezey was paying for the appointment, Tim walked out of the doctor’s office into the hallway, complaining it was ‘hot and stuffy’ but moments later was found unresponsive on the floor.

Vomit was splattered all over his clothes and his nose was bleeding, the report said.

Tim was given CPR before he was rushed to the Vienna Centre for Social Medicine, Paediatric Intensive Care Unit in an ambulance.

His pupils were at ‘maximum dilation’ at the hospital and a CT scan found severe swelling to the brain, the report said.

Ms Fehring understands Tim had gone into sepsis and when he collapsed onto the floor he went into cardiac arrest.

Tim was unable to be saved. His mother had been on a flight back to Melbourne at the time and was only informed about her son’s death by close friends who’d gone to meet her at the airport when she landed.

Autopsies showed Tim had a highly acute infection in his blood and lungs which may have led to heart failure.

Ms Fehring said she supports the recommendations put forward by the coroner and has suggested a registered nurse be present on every trip.

‘For Tim to have left us so happy and excited to go away and within a matter of days deteriorate so fast, it astounds us,’ she said.

‘We are not wanting this ever to happen to any other child or for any family to go through what we have and are still going through.’