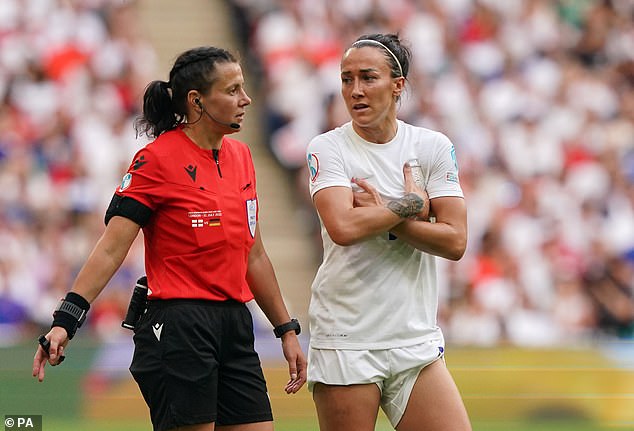 ‘The referee has been TERRIBLE’: Ian Wright fumes at ref in Euro 2022 final, while fans accuse Kateryna Monzul of ‘changing her stance’ on tough tackles as she dishes out three yellow cards in a goalless opening half at Wembley

By Michael Rudling For Mailonline

Former England striker Ian Wright has vented his anger at the officiating of the Euro 2022 final, after referee Kateryna Monzul took a strict approach in the first half.

The Ukrainian official  awarded three yellow cards in an even first 45 at Wembley.

Speaking at half time, Wright said: ‘The referee has been terrible, there has been inconsistency.’

The Lionesses received too bookings in the first half, with Georgia Stanway’s card in particular proving unpopular with fans.

England fans on twitter shared Wright’s sentiments, with one tweeting: ‘How is a referee being this bad in a Euro’s final? Neither of those were yellows. Embarassing.’

Another was equally worked up, saying: ‘Keep an eye on this referee in the 2nd half. This is shocking and poor refereeing. Absolutely shocking.’

Other supporters focused on Monzul’s apparent inconsistency between teams, as one commented: ‘What about the two blatant German yellow cards that were missed then referee? It’s a joke’

Another added: ‘Really wish the referee would find her cards when Obderdorf commits a foul.’

Whatever fans make of her skills as a referee, Monzul’s journey to the final has still been extraordinary.

She spent five days in a bunker in her native city of Kharkiv as the start of Russia’s invasion of Ukraine before fleeing the country by car and eventually settling in Italy.

Just months later, she has become the first Ukrainian to officiate in a women’s Euros final.