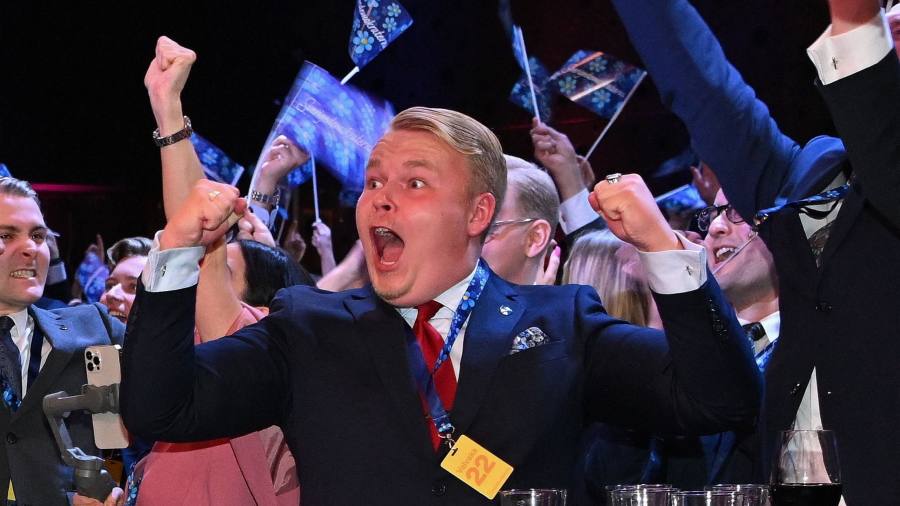 A nationalist party condemned by Sweden’s centre-left government as “neo-fascists” has become the country’s second-largest, pushing the opposition rightwing into a slender lead in parliamentary elections that remain too close to call.

A preliminary result is not expected until Wednesday, but with 94 per cent of votes counted, the rightwing bloc held a lead of under one percentage point over the ruling centre-left group led by Prime Minister Magdalena Andersson.

The anti-immigration Sweden Democrats, shunned for most of the past decade, are certain to be the largest party on the right, trailing only Andersson’s Social Democrats, who have come first in every election since 1917.

“Our ambition is to sit in government,” said Jimmie Åkesson, leader of the Sweden Democrats.

The party, which has its roots in the neo-Nazi movement, was scorned by all other parties until the latest parliament, when its tough policies on law and order and immigration started to draw support from the centre-right.

An unusually harsh campaign focused on gang crime and immigration after a record number of fatal shootings in troubled suburbs pushed Sweden to the top of such statistics in Europe.

If the rightwing lead is confirmed, the four parties in the group will face a tricky task to form a coherent government owing to a wafer-thin majority and infighting.

Ulf Kristersson, leader of the mainstream centre-right Moderates, which slipped to third place for the first time since 1976, is the favourite to become prime minister, but will have to deal with an emboldened nationalist party that received more votes.

“I stand ready to do everything I can to create a new, stable and effective government for all of Sweden and all citizens,” he said early on Monday morning.

Nicholas Aylott, senior lecturer at Södertörn University, called the results “historic” for the Sweden Democrats and said it would be an “absolute body blow” for the Moderates. He added: “Stable, strong, decisive government is probably not to be expected [from the election], but not chaos either.”

The country’s politics have been tumultuous since the arrival of the Sweden Democrats in parliament in 2010. The ruling Social Democrats have been forced twice to govern with opposition rightwing budgets, while Andersson herself had to resign as prime minister last year after only seven hours in the post, before being re-elected a week later.

The Social Democrats campaigned less on issues and more on the image of Andersson, who only became prime minister in November and is by far the most popular politician in the country.

Two of the biggest recent controversies — whether Sweden should join Nato, and the country’s handling of Covid-19 — barely featured in a campaign that was instead defined by tough pledges on immigration and crime and an intense late focus on sky-high electricity prices.

The five smaller parties in parliament on the left and right will retain their status after scoring 4-7 per cent each.