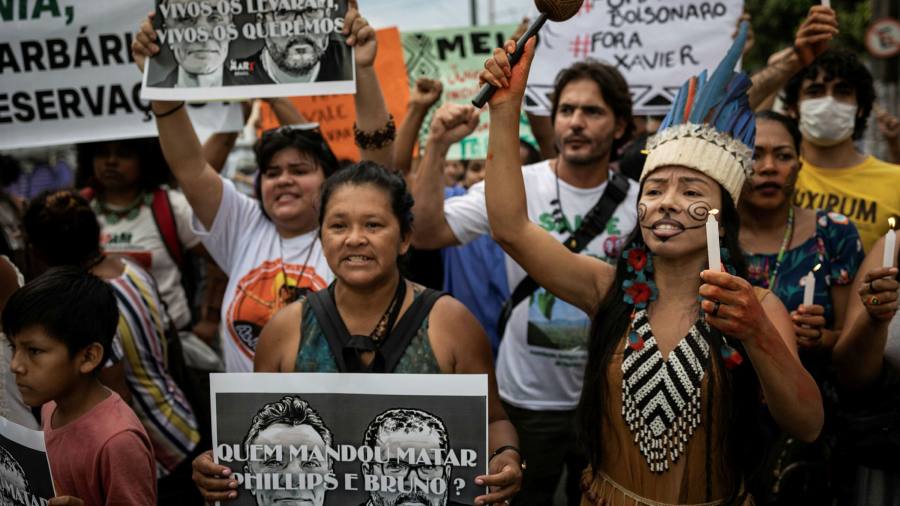 Brazilian federal police on Wednesday said a suspect had confessed to killing a British journalist and a Brazilian researcher who went missing in the Amazon rainforest last week.

Dom Phillips, a contributor to The Guardian and the Financial Times, and Bruno Pereira, an expert on indigenous peoples, disappeared last week in the Javari valley, a remote area near the border with Peru that is home to several native tribes.

Federal police said Amarildo Oliveira, a suspected illegal fisherman who lives in the region, admitted killing Phillips and Pereira and had brought officers to the spot where their bodies were buried. Forensics are being undertaken to identify the remains.

“We would not have arrived at the location so quickly if we didn’t have the confession,” said Alexandre Fontes, a federal police officer.

Oliveira has been in police custody since last week. His brother, Oseney Oliveira, was arrested on Tuesday for alleged involvement in the crime. Fontes said further arrests were possible.

Their disappearance had triggered a social media campaign and pressure on the government to launch a search and rescue mission. Army and navy troops were dispatched to the region, which is known for illicit activity including illegal fishing, gold mining and logging. Local indigenous groups also joined the search.

The killings highlight the violent, often lawless nature of the Amazon region.

Indigenous people and staff from non-governmental organisations have long borne the brunt of aggression from groups operating illegally in the area. Environmentalists say the situation has deteriorated dramatically since the election in 2018 of far-right president Jair Bolsonaro, whose rhetoric in support of illegal gold miners and loggers has been taken as a green light to raze the rainforest.

Brazil’s environmental enforcement agencies have also been subjected to budget cuts, which have resulted in reduced manpower and a growing sense of impunity among the region’s illegal operators.

“They killed Bruno and Dom. They killed two of ours,” said Carlos Rittl, a Brazilian biologist and a policy adviser at the Rainforest Foundation Norway. “They died because they cared. They died because for three-and-a-half years, the president has attacked indigenous people, environmentalists and journalists and encouraged crime in the Amazon.”

Before the news of the alleged murder, Bolsonaro said: “That Englishman [Phillips] was disliked in the region because he wrote a lot against [illegal] miners and about environmental questions. He should have redoubled his efforts to look after himself.”

Phillips, 57, was a seasoned journalist who had lived in Brazil for 15 years.

Before his disappearance, Pereira — a well-known and respected former official of Funai, the government’s indigenous affairs agency — had received threats due to his work.

The two men were last seen leaving a village by boat en route to the regional town of Atalaia do Norte.

After a few days, blood was found in the boat of one of the Oliveira brothers.

On Sunday night, belongings of Phillips and Pereira were found tied to a partially submerged tree.