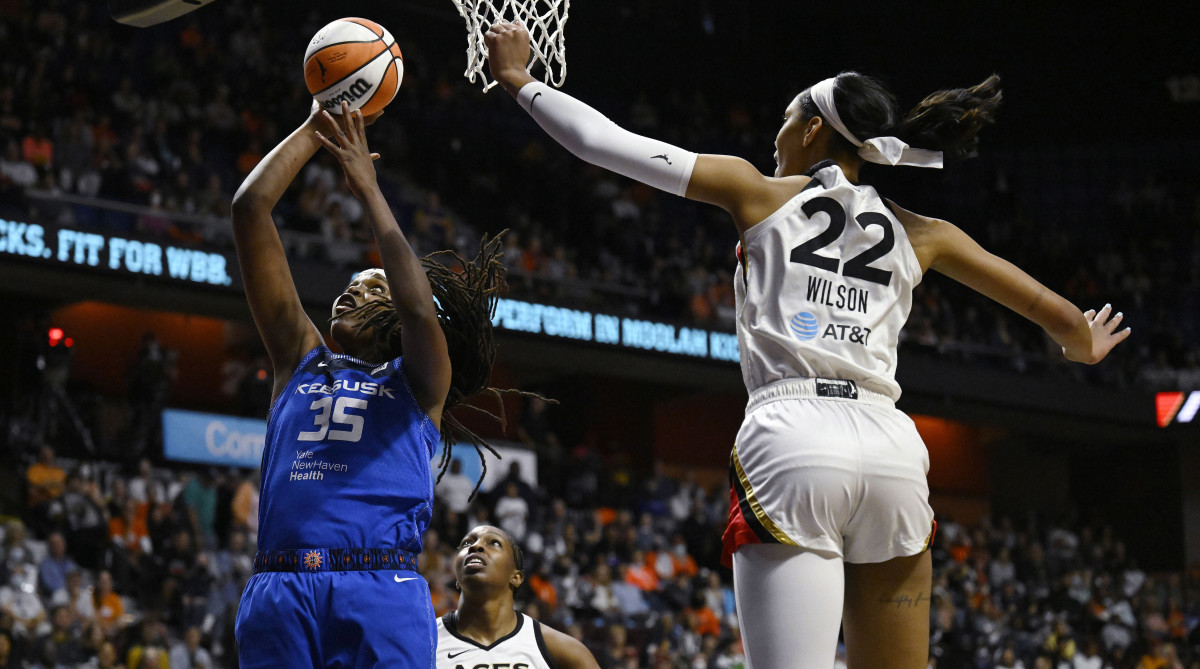 UNCASVILLE, CONN. — The final buzzer had just sounded in Game 3 of the WNBA Finals, with the Sun having won 105–76, when Connecticut star forward Jonquel Jones grabbed a microphone. “We appreciate y’all so much,” she told the crowd of 8,745 people. “Your energy was contagious. We needed it. Let’s get another one.” Jones played her best game of the Finals and scored a team-high 20 points in the win. She was joined by All-Star forward Alyssa Thomas, who recorded the first triple-double in WNBA Finals history with 16 points, 15 rebounds and 11 assists. Connecticut now trails the best-of-five series 2–1. Game 4 is set for Sunday at 4 p.m. ET. But before the Sun face yet another elimination game, here are three takeaways from Game 3:

It took only 2:15 for Sun coach/general manager Curt Miller to call his first timeout. Connecticut trailed 9–2, having missed two three-pointers and recorded one turnover on its four possessions. “There was no panic, we were still settling into our game plan,” Thomas said. From there, the Sun played their best offensive stretch of the series. They closed the quarter on a 32–10 run, to lead by 15. They shot 82.4% in the contest’s first 10 minutes. “They just kicked our a– in every way possible,” Aces coach Becky Hammon said. “There’s no two ways about it. If there was a stat on mental toughness and physicality, they would have kicked our a– there, too.”

On defense, Connecticut blitzed Las Vegas’s star guards on ball-screens, doubling Kelsey Plum and Chelsea Gray on the perimeter. Sun guard DeWanna Bonner spent the majority of the night on Gray, with Miller saying they wanted to utilize Bonner’s length to try and contest shots as much as they could. “I thought we were too hesitant a lot of times with that first pass out,” Hammon said. “I thought the first five minutes kind of set the tone for the whole game, and you don’t want to be digging out of a hole on the road.”

The Aces did claw out of the early deficit, eventually using a 11–2 run just before halftime to trail by only 11 at the break. But Connecticut’s first-quarter advantage proved too much to overcome.

Jones looked like her MVP self, while Thomas made history

Coming out the locker room, it appeared as if the Aces were prepared to push the Sun for the duration of the contest. But early on in the frame, the 2021 league MVP established her presence to ensure her team would not squander its first-half success. Jones assisted guard Courtney Williams on the Sun’s first possession and assisted Bonner on their second. And midway through the period, she went on a scoring spree of her own, eventually finishing with 11 points in the frame. Miller said that Jones’s success was not necessarily a reflection of play calls designed for his star forward, but that she had “demanded, had determination, to get catches.”

“She was aggressive and active off the ball and made herself available to a secondary pass,” he said.

The Sun set a WNBA Finals record with 66 points in the paint. Jones was instrumental in that, but so too was Thomas, who was a force around the rim. She said afterward that she approached Game 3 just “like any other game.” And with the stakes at its highest, she appeared unfazed. “She looked for her own offense but again was so unselfish, spraying the ball around, which was so important,” Miller said.

Wilson and Gray were held in check

The game’s 29-point final scoreline is a tad misleading. While Las Vegas pulled its starters with 4:22 to play in the fourth quarter, trailing by 18, it was down by only eight entering the fourth quarter. Simply put, it was unable to muster up an early-frame run. 2022 league MVP A’ja Wilson scored 19 points in another efficient showing—she made eight of her 14 shot attempts—while Gray scored 11 on four-of-seven shooting. But neither was nearly as dominant as they were in Las Vegas. Gray scored nine of her points in a 59-second stretch late in the second quarter, and did not score after halftime. Wilson had only five points after intermission. “We lacked energy at the end of the day,” Wilson said. “And you need that coming into a road game like this with the first road game and they just had more energy than us. They looked new. They looked fresh. I think that was the biggest difference.”

As the series looks to Sunday, Hammon said her team “was ticked off.”

“I’m not going to have to say much,” she said, when asked what she is planning to tell her team ahead of Game 4. “Go back. Look at ways we can exploit what they are doing and go throw the ball up.”

• Becky Hammon, Curt Miller and a Coaching Tree Rooted in the ’90s
•.Aces’ Plum, Sky’s Parker Join MVP Wilson on All-WNBA First Team
• On a Team of Superheroes, Chelsea Gray Is the Scientist Behind Aces