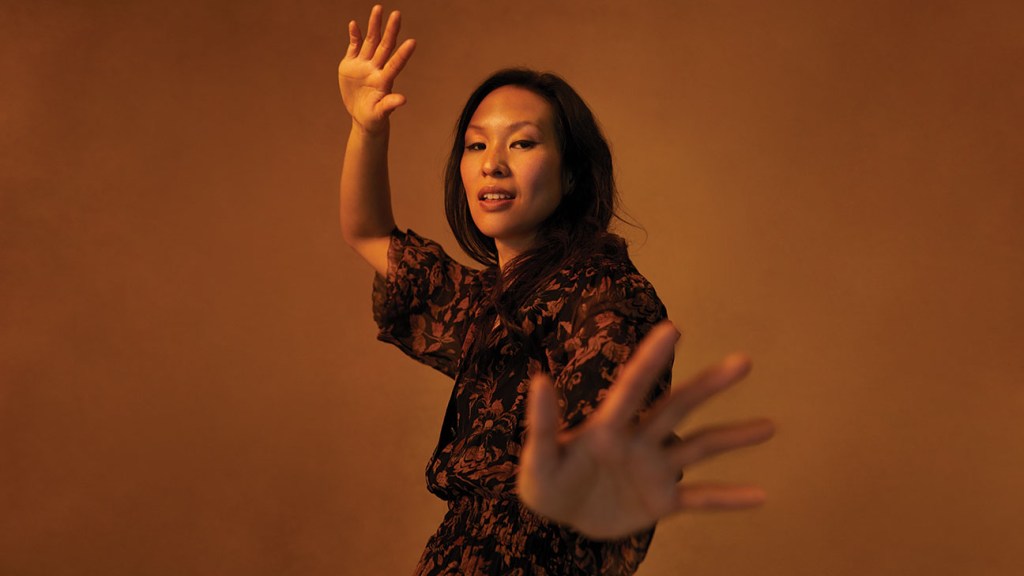 After years of commercial work and background parts, Sue Ann Pien takes on the first major lead role of her career in Jason Katims’ new Amazon series As We See It, following three 20-something roommates on the autism spectrum. She stars as Violet, who works a fast food job while dreaming of having her first boyfriend and navigating a complicated relationship with her brother Van, played by Chris Pang.

“The first time I read the script, I actually cried. One, I had never seen a character like Violet and, two, I knew exactly who she was; it was like Jason wrote that part for me,” says Pien, who like her fellow leads Rick Glassman and Albert Rutecki is on the spectrum herself. “There were just so many parallels between us: being young and trying so hard, feeling like I wanted to be like everyone else.”

The connection was so strong that situations Katims wrote for the character before meeting Pien actually happened to her, like when Violet goes on a Bumble date and the man quickly makes an excuse to go to the bathroom but really leaves while she waits hours for his return. “To be able to play Violet, it was finally being able to be seen and understood,” she says. “It took away a lot of this loneliness I had from my youth.”

“Sue Ann has a killer combination as an actress of being both fiercely intelligent and completely in touch with her emotional world. Honestly, I’m in awe of her,” says Katims, whose previous shows include Parenthood, which featured a character with Asperger syndrome. “She never utters a false note as an actress — it all just comes from some deep, true place inside of her. She is also an absolute delight to work with. Her boundless energy and joy of life is contagious and has been a big contributor to what has made this such a joyous set.”

Pien — an L.A. native born to Taiwanese parents, with an aerospace engineer father — recalls struggling to make friends growing up, which led her to pick up on the mannerisms and clothes of other girls at school as a way to fit in: “Out of that, I realized I’ve been acting my entire life.” As the actress detailed in a 2016 Medium piece, she and her family knew she was different growing up, but she was unaware it was autism until significantly into her adult life.

Now her career has led to As We See It, with a set that Pien says allowed her to express herself in ways she hadn’t been allowed to in the past — like when she’d get in trouble in acting school for behaving “out of line” where “people don’t have a lot of tolerance for that.”

“Personally, I’m very sensitive to sound and noises, and I have to mask it a lot on other sets,” Pien says. “I didn’t have to hide myself on this set; there was so much more of me available. I wasn’t afraid of something bad happening. I was around other actors and people who have loved ones on the spectrum, so it felt like everyone was very intuitive about who I am and what I needed.” In addition to the three stars — who in the show live under the care of aide Mandy (Sosie Bacon) — several supporting actors also are on the spectrum, with some playing neurotypical roles.

Pien says that authentic casting meant a lot to her and that it makes a statement in the entertainment industry at large: “I think it’s going to open up a world of possibilities and acceptance for actors with diverse abilities.”

An actress with big goals for her career, Pien’s dream part is a role in Denis Villeneuve’s Dune sequel (she’s such an avid space and sci-fi lover that she was among the 100 candidates for the now-defunct Mars One mission to colonize the planet on a one-way trip). And after feeling like the journey to this role made “everything finally make sense, everything that I went through as a person on the autism spectrum,” she also hopes As We See It will impact the public’s view of autistic people: “I don’t think the world has seen anything like this yet.”

A version of this story first appeared in the Jan. 19 issue of The Hollywood Reporter magazine. Click here to subscribe.