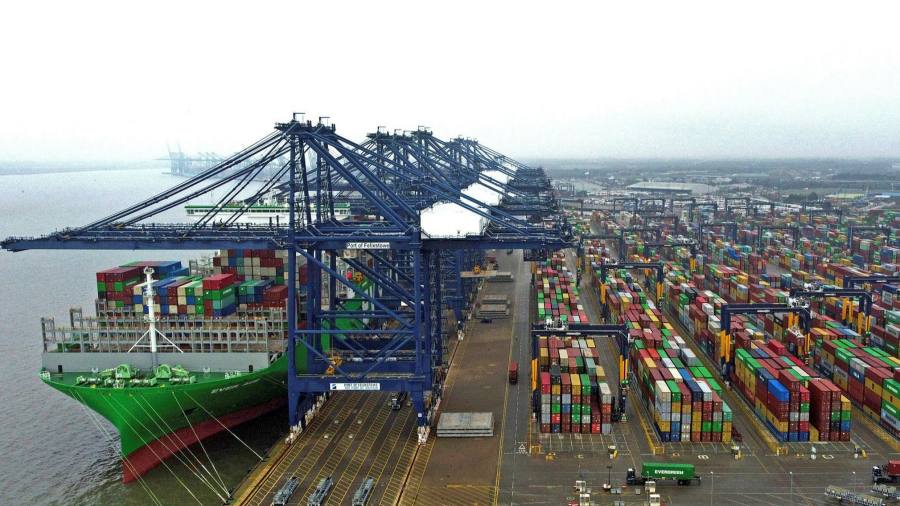 The Unite union said its members at Felixstowe port had voted “overwhelmingly” for industrial action in a dispute over pay, with 92 per cent in favour on an 81 per cent turnout.

It is pressing the port — owned by Hong Kong conglomerate CK Hutchison — to go beyond its existing offer of a 5 per cent pay rise and a £500 cash bonus, arguing this represents a big real-terms cut at a time inflation is approaching double digits.

Unite claimed a strike would bring the harbour facility on the Suffolk coast to a standstill and cause “major logistical problems” for maritime and road haulage transport.

Felixstowe port said it was “disappointed” with the result of the ballot as it believed it had made a “very fair offer”. It added that the union had agreed to its request to meet next week with Acas, the dispute resolution service, in hope of avoiding industrial action.

The union has not yet set any dates for action, but if the dispute is not resolved, some 1,900 staff — almost all the port’s dock workers — could walk out in the first strike at the Suffolk hub for 30 years.

A strike at Felixstowe — which handled some 17.6mn tonnes of container traffic in 2021 and more than 20,000 ships — would compound the problems caused by industrial action on the rail network, border delays at Channel ports and labour shortages at UK airports.

William Bain, head of trade policy at the British Chambers of Commerce, said it could worsen supply chain problems and put further pressure on prices when economic “storm clouds” were gathering.

“A summer of strikes really isn’t what the UK economy needs right now. Continuing constructive dialogue is necessary to avert further industrial action,” the CBI business group said, adding that both workers and employers were concerned about rising prices.

Network Rail, the owner of Britain’s rail infrastructure, hardened its position in the ongoing dispute with the RMT rail union on Thursday when it launched a legal process to allow it force through changes to working practices if it the two sides do not reach a deal linking the changes to guarantees on jobs and pay.

Network Rail said reforms including changes in rostering and the use of technology were essential to fund any pay rise, given the long-term drop in commuting. The company said the changes could lead to a smaller maintenance workforce but that it expected to avoid compulsory redundancies.

“We haven’t given up on finding a negotiated way forward . . . but we can’t continue to circle the same ground day after day, week after week,” said Andrew Haines, Network Rail chief executive.

The TSSA, one of the other rail unions, has taken a different approach from the RMT, saying on Thursday that it would seek members’ views on Network Rail’s latest offer to staff in lower-paid grades before deciding whether to go ahead with two days of planned strike action in August.

The RMT, which has so far rejected Network Rail’s offer, said talks to reach a negotiated settlement to the dispute were ongoing.