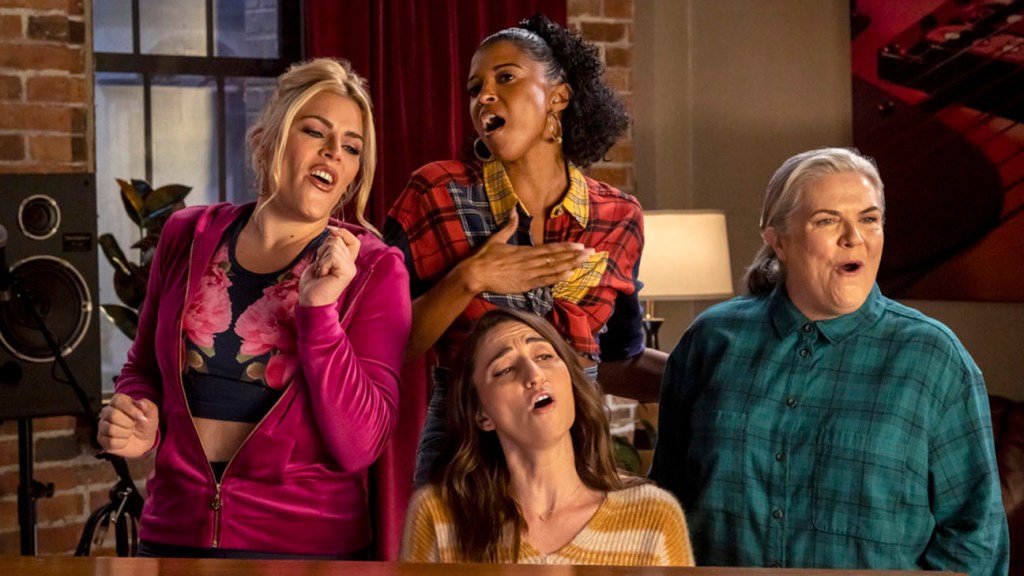 If Girls5eva‘s first season felt in some ways like a return to the past — what with its lead characters reuniting to reclaim the former glory of their early-aughts girl group, 20 years later — the second represents a step forward into the future. Having successfully seized the spotlight at Jingle Ball in the season one finale, Dawn (Sara Bareilles), Wickie (Renée Elise Goldsberry), Summer (Busy Philipps) and Gloria (Paula Pell) dive headfirst into the work of creating their next album, while also trying to evolve in their personal lives.

But growth for these characters isn’t so much about becoming different people as about becoming more self-assured versions of the lovable oddballs they already are. In all the best ways, Girls5eva, and Girls5eva, haven’t changed very much at all.

So much more than a one-hit wonder.


The jokes-on-jokes-on-jokes comic rhythm that’s a signature of Tina Fey-produced series — which also include 30 Rock, Great News and The Unbreakable Kimmy Schmidt — feels possibly even smoother in the eight episodes of the new season. For each punchline delivered with great gusto, often by Goldsberry’s delightfully obnoxious Wickie, there are seemingly a dozen others tossed off in passing comments, or silently relegated to random props. For each pointed jab at the ruthless showbiz world these characters inhabit, there’s another gag that exists simply to be silly. If not every joke lands (and when you have that many piled on top of each other, a few, like a couple of nods to Ruth Bader Ginsberg, are bound to feel staler than others), more than enough of them do to deliver a consistently good time.

Showrunner Meredith Scardino’s jokes are sharpened by a hyper-specific sense of perspective: For me, an older-millennial woman in a major coastal city who professionally obsesses over pop culture on the internet, the references to bad art friends, Matt Damon’s terrible PR or industry types like “guy dressed entirely in swag from canceled shows” hit almost too close to home — which seems like exactly the sort of slightly embarrassing revelation that Girls5eva would, very fairly, poke fun at me for.

The sophomore season spends slightly less energy skewering the rank misogyny of the recent-ish past, perhaps because there are so many other shows to take up that mantle now. But it’s shrewd about the specific challenges and joys of life for women in their 40s. For example, in the “joys” category: sweatpants that have become sheer in the back from so much time spent sitting on the couch watching Business Throne with your spouse.

There’s a whole plotline around Gloria’s knee replacement, and another about the possibility of a “geriatric” pregnancy, in which a brochure likens the uterus of a woman over 35 to “Dresden after the Allied firebombing.” Not all of the observations are especially fresh: It’s hardly news that moms seem to bear the greater burden of parenthood — though having Heidi Gardner play a fellow mom who might have ulterior motives for only emailing other moms makes for a fairly amusing way of rehashing it. (And a well-deserved dig at Ted Lasso‘s approach to parenting later in the season definitely made me giggle.)

Meanwhile, Girls5eva also has an eye for the continued absurdities of the entertainment business. In the series’ heightened version of the biz, all publicists are named Amanda, knuckle skin-tucks are a thing, STEM stands for “selfies, TikTok, emojis and memes” — and a label owned by the Property Brothers can demand that Girls5eva put together an entire album in just six weeks, leading to disastrous song ideas like Dawn trying to use all 430 definitions of the word “set” in an eight-minute track. Fans needn’t worry, though: The girls are still capable of putting out bangers like “B.P.E.” (Big Pussy Energy), which makes use of Goldsberry’s gifts as a rapper.

All the while, the girls face their own character-building challenges, some more willingly than others. The most effective of these storylines centers on Summer, who this season graduates from a sweet but sheltered bimbo to … still a sweet but sheltered bimbo, but one becoming increasingly comfortable taking charge of her own life in the wake of her divorce from Kev (Andrew Rannells). Philipps, who perfected Summer’s combination of ditzy and sincere last season, shines even brighter as we get to see the character try on slightly different modes of being.

Meanwhile, Goldsberry manages the trick of making Wickie seem slightly softer and more self-aware, without losing the theatricality and self-absorption that make her the show’s comic standout. She’s still the kind of woman who’ll announce “There’s a call for me in the other room” and chuck her phone across the apartment rather than spend too much time talking to Sheawn (Chad L. Coleman), a normie who refers to himself as a “lunch lord” (“It’s the masculine of lunch lady,” he explains to a scornful Wickie). But she’s also become someone who might be willing to open up enough to show a person she cares about her “bad” foot — the one that, horror of horrors, threatens to lower her score on WikiFeet.

There’s sincere camaraderie in the way the women lean on each other, though it seems a missed opportunity that Girls5eva so frequently falls back on the same two pairings (namely, Summer/Gloria and Dawn/Wickie). One of the few episodes this season to mix up those duos yields unexpectedly touching dividends when Gloria and Wickie bond over their lingering grief over their late fifth bandmate, Ashley (Ashley Park), who season-one viewers will remember perished in a tragic infinity-pool accident; of course, this being Girls5eva, they deal with their grief by harassing another pop star whose stage persona falls somewhere between Lady Gaga and Daft Punk.

In a broadcast that opens the season, a news anchor describes the group as one-hit wonders hoping to become two-hit wonders. That can’t help but feel like a comment on the show itself, which after an enthusiastically received freshman season faces the tall order of somehow capturing that magic again. Girls5eva season two manages to hit all the same highs, while expanding its range ever so slightly to make room for earnest self-reflection among all those goofy jokes. Now that’s big pussy energy.