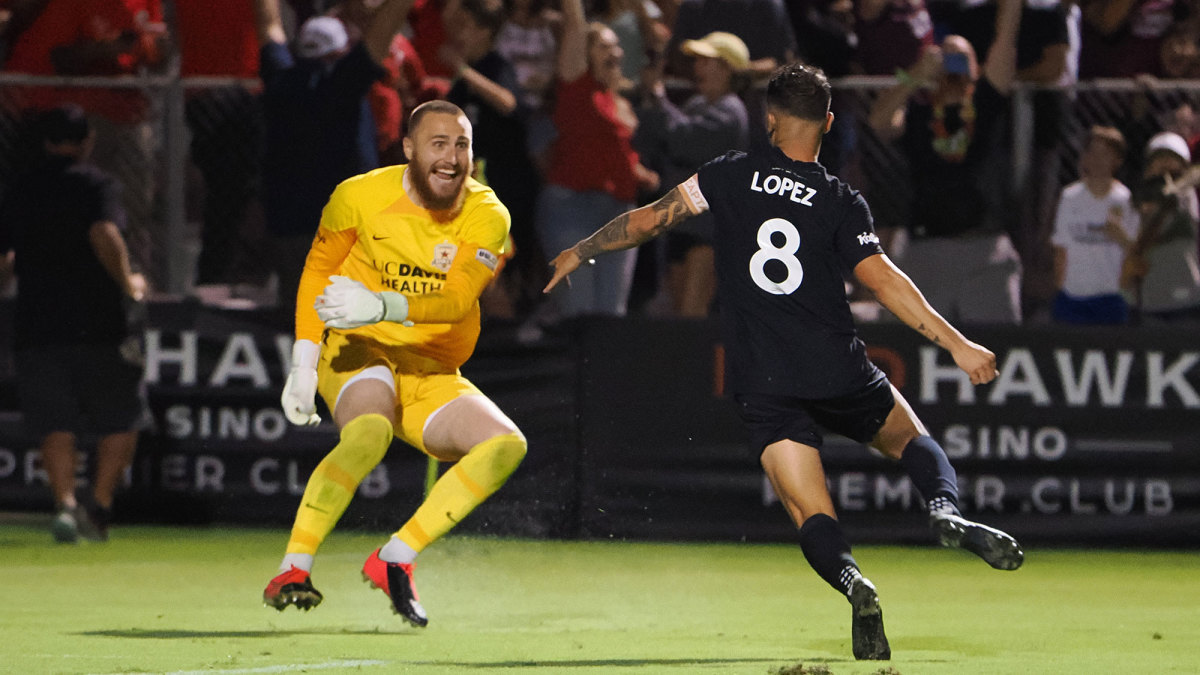 Sacramento Republic’s sensational run at the 2022 U.S. Open Cup has made it all the way to the final.

The USL Championship side—a club that thought it was once a lock for MLS expansion—will play for the domestic cup title and a place in the Concacaf Champions League after ousting four-time winner Sporting Kansas City on penalty kicks following a scoreless draw at Heart Health Park Wednesday night. In doing so, it becomes the first non-MLS club since the Charleston Battery in 2008 to make the final. No non-MLS side has won the Open Cup since 1999, when the Rochester Rhinos beat the Colorado Rapids.

Wednesday’s 120-minute stalemate was settled by a thrilling shootout, with Sacramento star Rodrigo López delivering the decisive spot kick to set up a final against Orlando City, which had routed the New York Red Bulls earlier in the night, 5–1, at Exploria Stadium. The Lions will host the Sept. 7 final.

Prior to López’s heroics in the shootout came a few other memorable moments.  There was Sacramento goalkeeper Danny Vitiello, who earlier had a save taken off the board because he had come off his line too early, making the balance-shifting stop on SKC veteran Graham Zusi, a U.S. World Cup veteran and a three-time Open Cup winner.

That was preceded by some supreme showmanship by Maalique Foster, who scored on a deftly taken Panenka, then celebrated with a backflip and Steph Curry’s trademark “night night” move—even though the conversion just made it 4–4 at the time.

But perhaps Foster had a premonition about what would follow, given that Vitiello’s save and López’s make sealed the deal soon after on a famous night for the lower-division side.

It was in October 2019 that Republic’s five-year wait for MLS expansion had appeared to end, but the bid fell apart after losing the backing of lead investor and billionaire Ron Burkle. In the meantime, Inter Miami and Nashville SC joined in 2020, Austin leaped to the front of the line a year later after the league sorted out its Columbus issue with Anthony Precourt, Charlotte joined MLS this season and St. Louis is set to join in 2023. The league will expand to 30 teams, and it’s long been expected that Las Vegas will be the recipient of that franchise.

Nevertheless, Sacramento can make a statement of its own in MLS territory if it can knock off a fourth top-flight team. In the round of 16, Republic took down the San Jose Earthquakes, and the LA Galaxy were next to fall in the quarterfinals. Then came SKC in the semis. Orlando has never won a U.S. Open Cup title or even reached the final before this season, but it’s coached by a previous winner, with Óscar Pareja guiding FC Dallas to the cup in 2016.