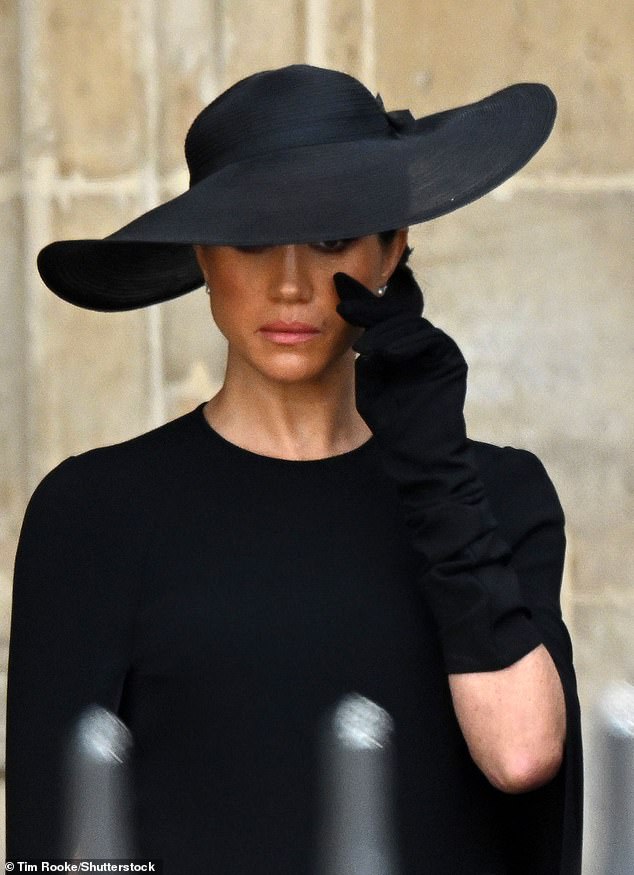 Meghan Markle is claimed to have requested a ‘one-to-one’ meeting with King Charles to heal rifts before her departure to California with Harry after the Queen‘s funeral, a royal reporter has alleged.

Neil Sean, an entertainment correspondent who has appeared on NBC News, MSNBC and Access Hollywood, said that he had heard from a ‘very good source’ that the American actress had sent a letter requesting a private conversation with the King.

Mr Sean claims that Meghan wants to ‘clear the air’ amid reports the couple will fly back to the US as soon as they can to see their children, Archie, three, and Lilibet, one.

The Sussexes are believed to be in Windsor today after the extraordinary state funeral and burial of the Queen yesterday.

‘She’d now like before they return back to California to have a one-to-one audience with King Charles III,’ Sean said in a video posted to YouTube, that has recorded nearly 300k views.

‘It’s a very brave move from Meghan herself,’ Sean said.

Meghan Markle, the Dutchess of Sussex, requested a ‘one-to-one’ meeting with Charles in a formal letter sent to the new King, according to a Royals insider

Detailing the content of the letter, he said: ‘It would be an opportunity to clear the air, pull the rights from wrongs and explain some of the rationale behind what they’ve been doing over the last two years.

‘Now, you know, you have to admire Meghan’s self-belief, whatever you think.’

However, Sean warned it remains unclear if the letter will be enough for the couple to make amends with the Royal Family.

‘Truthfully, we have no idea if this is going to go forward.’

Sean said it was customary to request the King’s presence through a letter.

‘This is how you write to the King through his equity, and of course that’s passed on,’ he told his YouTube channel.

However, Sean warned it remains unclear if the letter will be enough for the couple to make amends with the Royal Family. Pictured is Harry at the Queen’s funeral

Yesterday, Prince William and Harry put aside their feud for a united front to remember the monarch, and again showed that they could at least be on speaking terms as they interacted with each other in the chapel at Windsor Castle.

William was seen walking to the end of the pew while holding back his son Prince George next to wife Kate Middleton and daughter Princess Charlotte, as he beckoned for Harry and Meghan to walk past them.

Harry and Meghan then took their seats, with the Duke of Sussex sitting next to Charlotte. Kate was sat in between Charlotte and George, with the nine-year-old prince next to William who was on the end of the pew.

The royals had followed behind the Queen’s coffin into the chapel after it was lifted from the state hearse and carried in ahead of the service at 4pm. The procession was led in by members of the Queen’s royal household.

Once again King Charles III followed behind the coffin, with Queen Consort Camilla, as well as Princess Anne and Vice Admiral Sir Tim Laurence behind, then Prince Andrew, Prince Edward and Sophie, Countess of Wessex.

At the end of the day, Harry was seen puffing his cheeks as he got into a car with Meghan, following an emotional day.

The Duke of Sussex and other royals, including King Charles III and the Queen Consort, Camilla, were pictured leaving St George’s Chapel in Windsor yesterday afternoon after a moving committal service for the late monarch.

Earlier, William and Harry also walked together behind the Queen’s coffin in London in emotional scenes before it was carried into Westminster Abbey by the military bearer party for her state funeral.

It marked the fourth day in just over a week that Harry and William have carried out engagements together, with royal observers hoping they are making first steps to put their troubled relationship behind them.

The brothers also followed behind the Queen’s coffin for a procession to Westminster Hall last Wednesday; a vigil over the coffin on Saturday; and a walkabout with Kate and Meghan outside Windsor Castle on September 10.

While William and Harry have put aside their disagreements for royal events in recent days, fears over the content of Harry’s upcoming memoir continue to cast a cloud over their relationship – especially following the bombshell interview he and Meghan gave to Oprah Winfrey in March 2021 when they accused an unnamed royal of racism.

Rumours of a rift between the brothers first emerged in 2019 when they divided their households following various disagreements about Harry’s role, but their feud deepened amid the fallout from the Megxit saga in 2020.

But the death of the Queen has seen the rivals shelve their differences, with William and Kate joined in recent days by Harry and Meghan for the first occasions in more than two years since Commonwealth Day in March 2020.

Meghan Markle fans have divided the internet after claiming the Duchess of Sussex was the only member of the Royal Family who wept at Queen Elizabeth’s funeral – when others were clearly in tears.

Prince Harry’s wife was seen wiping away a tear during the moving ceremony at Westminster Abbey on Monday, with a trail of her tears clearly showing on her cheek.

The image of the moment was posted on Twitter with the caption; ‘Meghan being the only one who cried for the Queen…. Sums up everything really’

The image of the moment was posted on Twitter with the caption; ‘Meghan being the only one who cried for the Queen…. Sums up everything really.’

The poster, who calls themselves the ‘SussexDetective’, switched off replies to the tweet.

The duchess was later pictured battling with her emotions as the Queen’s coffin left the Abbey on its journey to her final resting place in a vault alongside Prince Philip at Windsor Castle.

The claim sparked fury on Twitter – with other users sharing pictures of Royals clearly crying.

Some posted pictures of other Royals clearly crying, adding: ‘People just saying anything on this app lmaooo i can’t…’

Images from the spectacular event showed King Charles’s eyes welling up with tears as he stared at his mother’s coffin in the Abbey, while little Princess Charlotte wept openly.

Catherine, Princess of Wales, was clearly fighting back tears when she arrived in the funeral cortege at the Abbey, her eyes red-raw with emotion.

Prince Edward could also be seen sobbing into a handkerchief while his wife, Sophie, the Duchess of Wessex was also caught dabbing tears from her eyes..

Prince George was clearly upset at one stage in the ceremony while Prince Andrew wept as he walked behind the Royal coffin on his way to Westminster.

Queen Consort Camilla also appeared to break down at Wellington Arch as the funeral party returned to Buckingham Palace.

But another Twitter user added: ‘I can imagine Meg and Harry have been very sad that one of the few people in that entire family who was kind to them is gone.’

The comment echoed Meghan’s admission on her reveal-all interview alongside Prince Harry on Oprah Winfrey’s sensation Royal blockbuster in March 2021.

‘She’s always been warm and inviting and really welcoming,’ the Duchess said of the Queen at the time.

Meghan recalled one of the first engagements she had with the Queen after marrying Harry in 2018.

Meghan Markle sobs in the pews of Westminster Abbey alongside Sophie, Duchess of Wessex

‘We had breakfast together that morning and she gave me a beautiful gift and I just really loved being in her company,’ she said.

‘We were in the car going between engagements. And she has a blanket that sits across her, her knees, for warmth, and it was chilly and she was like, Meghan, come on, and put it over my knees as well.’

In the wake of the Oprah interview, the late Queen released a touching statement expressing her sympathy for the young Royal couple’s ordeal.

‘The whole family is saddened to learn the full extent of how challenging the last few years have been for Harry and Meghan,’ read the statement.

‘Harry, Meghan, and Archie will always be much-loved family members.’

The apparent hypocrisy of the Duchess’s tears infuriated others.

‘So now she is crying? LIKE NOW?’ posted one. ‘Please, this one forced tear after everything she has done to destroy Queen’s final years means NOTHING.

‘She is such a disgrace, nothing gonna change that. She should be ashamed of herself.’

Another retweeted the picture of the duchess’s tears and added curtly: ‘An actress btw.’

He added: ‘There’s been lots of photos around and interpretations of photos and reading into photos that may or may not be true,’ he said.

‘There’s a couple of Meghan, um, with a tear running down her face – apparently – and also even one of Princess Charlotte that everyone was saying she was crying, and we don’t know if it was true or not.’

The Duchess of Sussex spoke fondly of the late Queen in her tell-all interview with Oprah Winfrey in 2021, recalling how warm and inviting the monarch had been to her