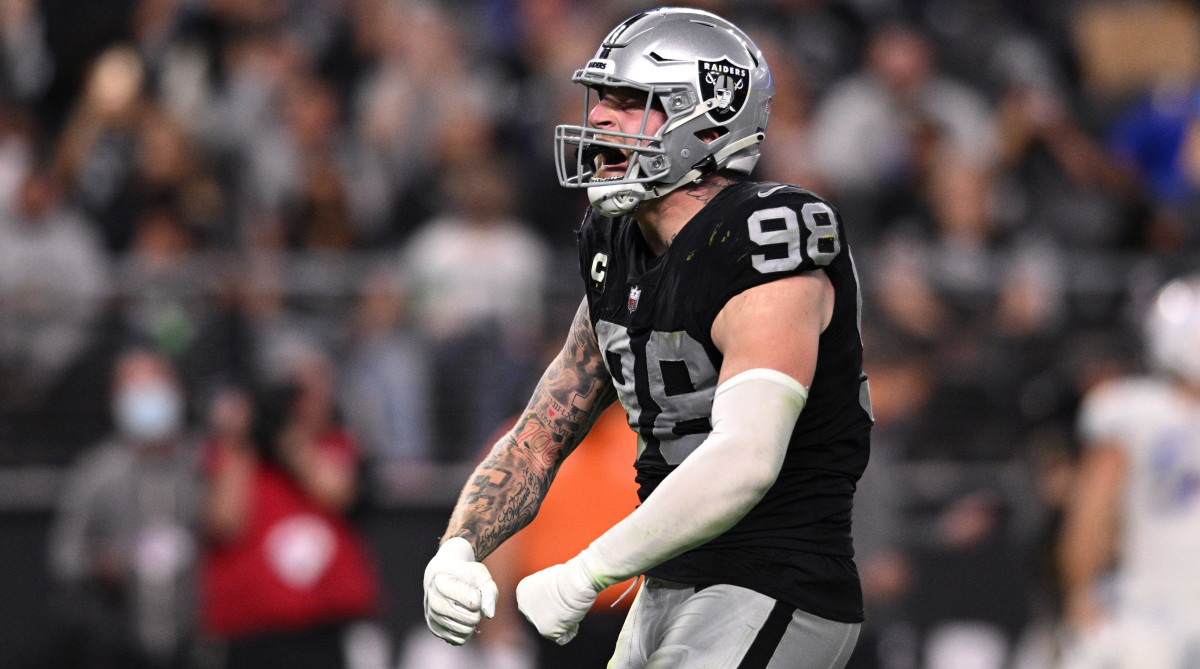 HENDERSON, Nev.—I’m told this wasn’t a very hot day for summer out here. Certainly could’ve fooled me. Either way, we got to see a session that was as close to game speed as you’ll see in practice, with a lot of 11-on-11 work, with a good amount of focus on situational play and brisk pace kept throughout. We came out with a few things from Raiders camp …

1. Maxx Crosby is going be a hellion this year, so long as he stays healthy. He’s proven a fantastic fit for Patrick Graham’s new defense (which has him standing up more), and the staff here thinks there’s another level in his game to be unlocked. Crosby’s skill, toughness, and motivation has been undeniable, and he’s been largely unblockable through camp. He’s also been pretty vocal as a leader, holding his teammates to the standard he sets.

2. Second-year corner Nate Hobbs has had an excellent summer, and his emergence gives the Raiders an intriguing option to start opposite Rock Ya-Sin. He’s held up a nicely against a really good group of Raider receivers, and the thought is he could easily become a pretty solid No. 2 corner in the league, with his skill and length.

3. A surprise revelation through camp: journeyman RB Ameer Abdullah. The eighth-year pro has developed good chemistry with Derek Carr, and looks to have the inside track in becoming the team’s passing-down back—an important role in Josh McDaniels’ offense that’s been filled by Kevin Faulk, Danny Woodhead, Shane Vereen and James White over the year. The Raiders have outstanding depth overall in the backfield, with Josh Jacobs backed up by Zamir White and Kenyan Drake, and that could give the team some trade flexibility later in the month.

4. Kolton Miller’s been rock solid at left tackle, flashing his athleticism, toughness and a real desire to be great to the new staff. The Raiders, though, have questions elsewhere up front. The emergence of Lester Cotton, who could wind up starting, has been a nice surprise, and should help. But the team still needs to figure out who’ll start at right tackle, with Alex Leatherwood, Jermaine Eluemunor and rookie Thayer Munford all in the running for the job.

5. I wouldn’t worry about Derek Carr’s fit in McDaniels’s offense. He looks decisive, confident, and I’d heard he hasn’t throw a single interception in camp—which is pretty wild. The volume that Carr had to manage in Gruden’s scheme helped prepare the quarterback to pilot McDaniels’s system, which can be complex, but is probably a bit more directed than Gruden’s. Another thing that’ll help Carr? Davante Adams. He looks like, well, Davante Adams. And it was apparent at the practice I attended, with Carr going his way consistently in two-minute work, and Adams notching a highlight-reel catch down the sideline over a helpless corner in the middle of the session. It looks to me like the two college teammates are gonna have a pretty big first year back together.