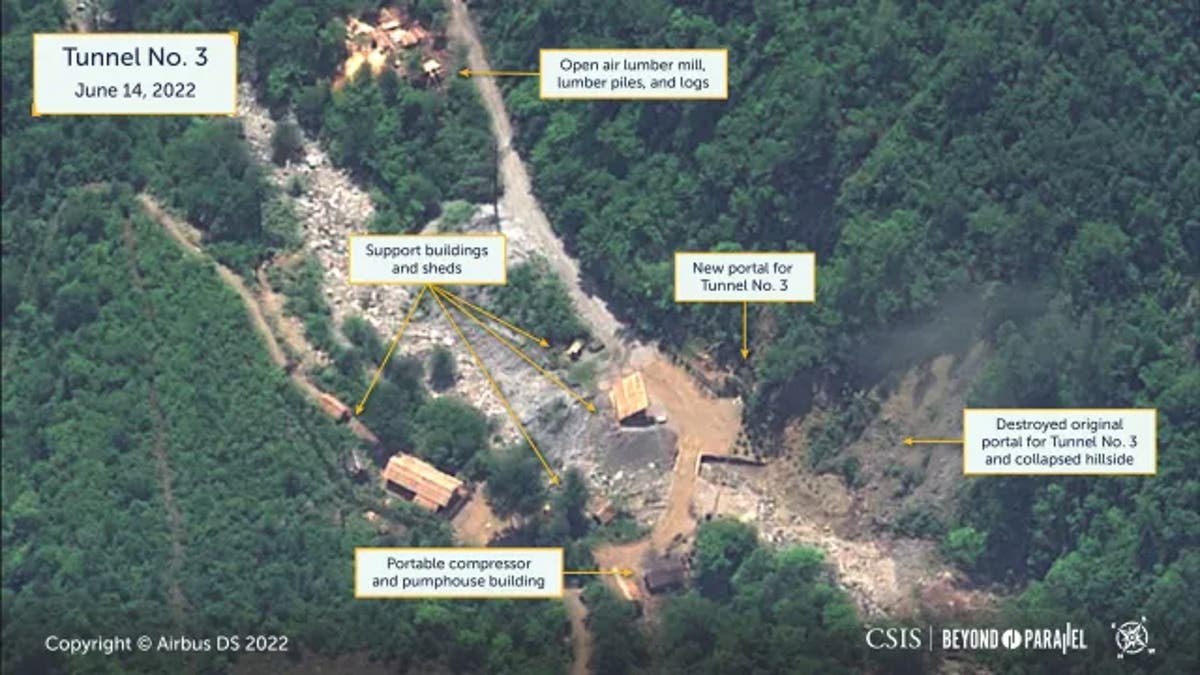 Refurbishment work and preparations at Tunnel No 3 of the Punggye-ri nuclear test facility appear to be almost complete and ready for the country’s seventh nuclear test, the US-based Center for Strategic and International Studies (CSIC) said in a report.

Satellite imagery acquired on 14 June showed renewed construction activity at Tunnel No 4 of the facility. Analysts believe this is the first time such activity was seen at the tunnel since 2018, when the facility was demolished.

The thinktank noted the new activity in this second tunnel “strongly suggested an effort to re-enable it for potential future testing”.

Punggye-ri is North Korea’s only nuclear test site where it has conducted six underground nuclear weapon tests from 2006 to 2017.

The tunnel entrances were blown up to shutter the site in 2018 after Pyongyang declared a self-imposed moratorium on nuclear and intercontinental ballistic missile (ICBM) tests.

This had removed the site’s observation facilities, research buildings and security posts.

But rapid developments have been flagged by South Korea, Japan, and US intelligence in the last four months, after leader Kim Jong-un said Pyongyang is no longer bound by the moratorium because of a lack of reciprocal steps by the US during denuclearisation talks.

According to CSIC, a closeup view of Tunnel No 3 shows a portal with an adjacent caisson-retaining wall and some minor landscaping with small trees or bushes, likely in anticipation of a visit by senior officials.

A caisson is a watertight chamber from which water is kept out through air pressure.

New images showed indications of “activity below the entrance” at Tunnel No 4 and a new caisson wall under construction in this tunnel as well.

Developments were also noticed in the facility’s main administration and support area while previous support and storage buildings are being renovated. The report said this was an indicator of a further re-enabling of Tunnel No 4.

The developments come as Sung Kim, a US special representative to North Korea, said North Korea can conduct a seventh nuclear test “at any time”.

Speaking at a press conference alongside US secretary of state Antony Blinken on Monday, South Korea’s foreign minister Park Jin warned North Korea only needed a “political decision” to go ahead with a seventh test as preparations were completed.

On Wednesday, North Korea’s foreign ministry condemned the “aggressive and hegemonic” strategy of the US as Washington deployed dozens of warships and submarines for a planned Rim of the Pacific (Rimpac) exercise on its doorstep.

The wargames with South Korea will begin from 29 July to 4 August with 26 nations, 38 warships, four submarines, nine national land forces, more than 170 aircraft and 25,000 troops around Hawaii and southern California.

“Due to the aggressive and hegemonic Indo-Pacific strategy of the US, the region is being exposed to the constant danger of military conflicts,” Ri Myong Hak, a researcher at the state-run Institute for Disarmament and Peace, wrote on the foreign ministry’s website.

“This, in turn, has a negative influence on the Korean Peninsula. The world should discern who the real culprit of violating peace is and remain vigilant about the military moves of the US.”