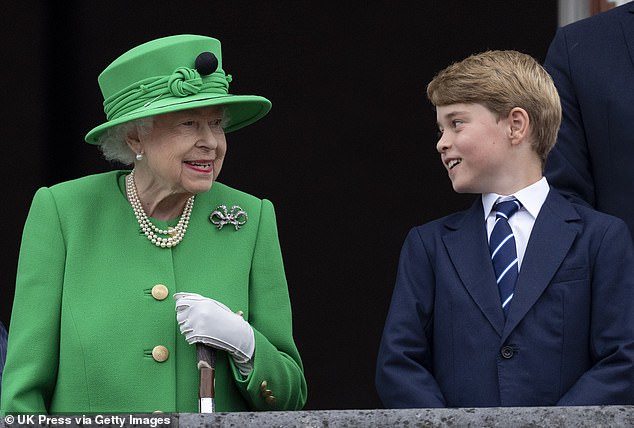 Senior palace advisers have asked the Prince and Princess of Wales to consider allowing Prince George to attend the State funeral of the Queen tomorrow because of the powerful symbolic message it would send.

At the tender age of nine, and having just overcome the daunting prospect of starting a new school, George is now the second in line to the throne.

With this in mind, aides have suggested it would be good for the public to see the young Prince – who affectionately called the Queen ‘Gan Gan’ – and is the future of the Monarchy.

One insider said: ‘Courtiers are keen for Prince George to be at the funeral in some capacity, if only to reassure the nation of the order of succession.’

Another palace source added: ‘It’s currently under discussion. No decision has been made yet.’

The children of the Prince and Princess of Wales have yet to be seen in public since the Queen’s death was announced on Thursday September 8.

Two of the late Queen’s other great-grandchildren, Mia and Lena Tindall, were at Westminster Hall on Friday for her lying-in-state. They were in the gallery with their parents Zara and Mike Tindall as their grandmother, Princess Anne, took her place alongside her three brothers for a silent vigil beside the Queen’s coffin.

There was no sign of George, Charlotte or Louis at last night’s vigil by the Queen’s grandchildren – and the Prince of Wales might have good reason to consider whether courtiers’ suggestions to involve a nine-year-old in tomorrow’s funeral are wise.

William spoke movingly last week about how walking behind his grandmother’s coffin as it left Buckingham Palace for the last time on Wednesday had evoked poignant memories of his mother Princess Diana’s funeral 25 years ago.

William and Harry, then 15 and 12, found their grief thrust into the public gaze when they followed Diana’s coffin along the same route down the Mall and Whitehall. It became one of the defining images of the day and left a lasting impact.

William has previously said it was ‘one of the hardest things I’ve ever done’, while Harry said: ‘I don’t think any child should be asked to do that, under any circumstances.’

Last week, William confided to well-wishers that reprising the ceremonial procession for his grandmother had been ‘challenging’ and ‘brought back a few memories’. – so he might be keen to protect his own children’s grief from the same public scrutiny.

It is anticipated that tomorrow’s proceedings will be watched by the biggest-ever global TV audience, and the inclusion of Prince George would attract particular attention. That said, the Prince and Princess of Wales have, in recent months, increasingly included their children in public events.

They accompanied their parents on a trip to Wales and were seen on the balcony at Buckingham Palace. Even four-year-old Prince Louis attended the Platinum Party at the Palace concert.

George was said to have a close relationship with his great-grandmother. The Queen marked his ninth birthday in July by sharing a picture of the pair together on the balcony at Buckingham Palace at the Jubilee weekend.

The Monarch’s official Instagram page featured the post: ‘Happy 9th Birthday Prince George!’ along with a celebratory cake emoji. Over the years she had proudly posted pictures at Christmas showing the direct line of succession, including one showing George stirring the Christmas pudding mixture as his father, grandfather and great-grandmother looked on.

The past two weeks have been a whirlwind for Prince William and his young family, who have just settled into Adelaide Cottage on the Windsor Estate after moving from London. On September 7, George, Charlotte and Louis were seen attending their first day at Lambrook School, a £50,000-a-year co-education prep school set in 52 acres of Berkshire countryside.

The following morning, Prince William received the message that his grandmother was gravely ill. He joined his aunt and uncles to fly to Balmoral Castle to be with the Queen while Kate decided to stay in Windsor to be with the children.

On the Friday, King Charles made his eldest son and daughter-in-law the Prince and Princess of Wales. As heir to the throne, William has also inherited the Duchy of Cornwall and all the responsibilities which come with running the huge commercial estate.

While the public has yet to see the young Wales children since the Queen’s death, William and Kate have given some indication as to how their children are coping.

The new Princess of Wales told one well-wisher: ‘They’re in school, being well looked after. They’re in a routine and they’re happy. They’re with new friends.’

Prince William said the children were ‘OK’, adding: ‘They’re settling in. We’re trying to keep everything constant and settled for them.’

When a member of the public said: ‘They must be talking about it in school’, William responded: ‘They are. There’s a lot of talking.’

Archie and Lilibet remain ‘at home’ with granny Doria

While the Duke and Duchess of Sussex have been at vigils in Westminster Hall this week and out receiving condolences from the public, their children, three-year-old Archie and 15-month-old Lilibet, are believed to have remained behind in America.

According to reports, they have been at the couple’s home in Montecito, California, under the care of nannies and the Duchess’s mother Doria Ragland.

However, Doria, the only member of Meghan’s family to have attended her wedding, was seen out alone in Los Angeles on Friday, a two-hour drive from Harry and Meghan’s home.

Harry and Meghan had been on a whistlestop tour of the UK and Germany and had been due to fly back to the US after attending an awards ceremony on the day the Queen died at Balmoral.

Their children are thought to have last been in Britain when they joined the late Queen at a private lunch in Windsor around the time of Lilibet’s first birthday in June.

While the Duke and Duchess of Sussex have been at vigils in Westminster Hall this week and out receiving condolences from the public, their children, three-year-old Archie and 15-month-old Lilibet, are believed to have remained behind in America