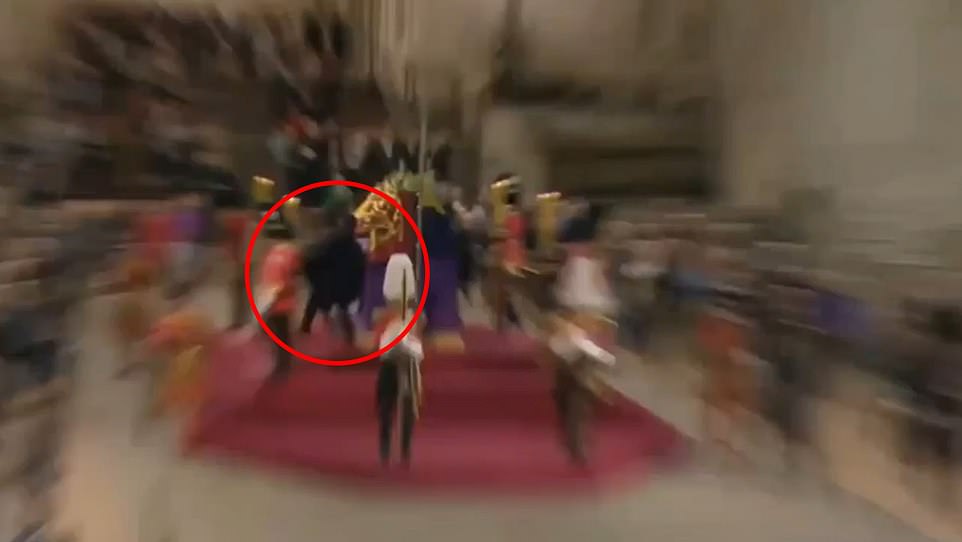 Police have arrested a man who attempted to grab at the Queen‘s coffin – in an incident which left mourners stunned.

Officers tackled the man to the floor during the jaw-dropping incident, which took place around 10pm at Westminster Hall on Friday.

It is believed the man pushed through a queue of mourners, among them a seven-year-old girl, rushed up to coffin and tried to lift the royal standard. He is then thought to have put his hands on the Queen’s casket.

Footage before and after the incident shows the Royal Standard, the official flag of the sovereign, has been moved.

The Queen has been lying in state at Westminster Hall since Wednesday, when her coffin was brought from Buckingham Palace to the historic venue to allow people to come and pay their respects.

Did you see the incident at Westminster Hall or do you know the man involved?

Hundreds of thousands of respectful mourners are thought to have passed through the hall in the last two days, despite queues times stretching up to 24 hours.

But mourners were left visibly shocked during Friday night’s incident – which took place just hours after King Charles and his family held a vigil in honour of the Queen.

Alongside siblings Anne, Andrew and Edward, the newly crowned monarch stood guard beside his mother’s coffin.

Last night, one witness who saw the incident old MailOnline how a mourner ‘screamed’ when she saw the man running at the coffin.

The witness said: ‘We saw him (the man) in the queue from the beginning of the queue and throughout the day, he was by himself.

‘When we entered the room we were at the top of the stairs when we saw the incident. A lady screamed as it happened it was quite unnerving. Although he was detained and people kept calm and carried on.’

Another witness Tracey Holland, whose seven-year-old niece, Darcy, was pushed aside by the man as he rushed at the coffin, last night described the incident.

She said: ‘A person decided they were going to push my seven-year-old niece out the way, run up to the coffin, lift up the standard and try to do I don’t know what. She was grabbed out the way and the police had him within two seconds.

Ms Holland added: (It was) terrible, absolutely terrible, so disrespectful and unbelievable – and this poor little seven-year-old child, this is her lasting memory of the Queen.’

The Metropolitan Police last night confirmed that a man had been arrested on suspicion of a public order offence.

Officers tackled the man (pictured) to the floor during the jaw-dropping incident, which took place around 10pm at Westminster Hall on Friday

Officers were seen carrying the man away from Westminster Hall following the incident, which took place around 10pm on Friday

It is believed the man pushed mourners out of the way, rushed up to coffin and tried to lift the royal standard before touching the Queen’s casket. Pictured: The royal standard appears to have moved position following the incident at 10pm

Another witness Tracey Holland (pictured left), whose seven-year-old niece, Darcy (pictured right), was pushed aside by the man as he rushed at the coffin, last night described the incident

A spokesperson for the force said: ‘At 10pm on Friday 16 September officers from the Met’s Parliamentary and Diplomatic Protection Command detained a man in Westminster Hall following a disturbance.

‘He was arrested for an offence under the Public Order Act and is currently in custody.’

A spokesperson for the the UK Parliament, said last night: ‘We’re aware of an incident in Westminster Hall, in which a member of the public moved out of the queue and towards the Catafalque.

‘They have now been removed from the Hall and the queue restarted.’

The Queen lying in state at Westminster Hall has been covered via a live stream on the BBC 24-hours a day since the coffin arrived at the venue on Wednesday.

But the cameras, which are delayed for around 30 seconds, quickly cut away from the coffin around 10pm on Friday, instead showing a moving image of the outside of the Palace of Westminster. The cameras did not turn back to the casket for around 15 minutes, at which point the Royal Standard appeared to have been moved.

One mourner who witnessed the incident, last night told The Sun: ‘It happened so fast. Someone got up to the coffin, grabbed the flag and pulled it upwards.

The mourner, who did not wish to be named, described members of the public ‘hysterically crying’ and ‘shaking’ after the incident.

It comes after King Charles and his siblings, Princess Anne and Princes Andrew and Edward, on Friday mounted their touching final vigil for the Queen before the late-monarch is laid to rest on Monday.

As tearful mourners watched on, the Queen’s four children stood guard of their mother’s coffin for more than 10 minutes at Westminster Hall this evening. The siblings each guarded a side of the coffin, with Charles, dressed in a Navy Admiral uniform, standing at the head.

It was their second, and final, vigil for the beloved monarch. Known as the ‘Vigil of the Children’ – an honor dating back to the time of George V – it mirrors a previous event held earlier this week at St Giles’ Cathedral in Edinburgh.

However, unlike the previous vigil in which Charles donned a kilt and Andrew a morning suit, all four siblings were tonight dressed in military colors.

The Duke of York, who was stripped of his armed forces patronages earlier this year amid a sexual abuse lawsuit in the United States, allegations he denied, had previously been banned from wearing military colors at public events.

Mourners were said to be left in shock during the incident, which took place just hours after King Charles and his family held a vigil in honour of the Queen. Alongside siblings Anne, Andrew and Edward, the newly crowned monarch stood guard beside his mother’s coffin (pictured)

As tearful mourners watched on, the Queen’s four children stood guard of their mother’s coffin for more than 10 minutes at Westminster Hall this evening. The siblings each guarded a side of the coffin, with Charles, dressed in a Navy Admiral uniform, standing at the head

But the 62-year-old royal outcast was given special dispensation to wear uniform at the vigil, as a ‘final mark of respect’ for his mother.

He wore the full military dress uniform of a Vice Admiral of the Navy, a title which he earned from his years serving in the Navy – including in the Falklands War.

Which military uniforms were the Queen’s four children wearing at the vigil?

Dressed in a Navy Admiral’s uniform

Dressed in a Colonel of the Blues and Royals uniform

Prince Andrew, the Duke of York

Prince Edward, the Earl of Wessex

Dressed in uniform as a Royal Honorary Colonel of the Royal Wessex Yeomanry.

On Saturday, the Queen’s eight grandchildren will perform a similar vigil at Westminster Hall. Prince Harry, who has also been banned from wearing military uniform as part of his ‘Megxit’ deal after stepping back from frontline royal duties in 2020, will also be given special dispensation to wear his army colors at the event.

Harry will join his brother, Prince William, along with Zara Tindall, Peter Philips, Princesses Beatrice and Eugenie, Lady Louise Windsor and James Viscount Severn at the event on Saturday night.

It came as organizers warned that wait times to see the Queen as she lies in state at Westminster Hall had stretched to as long as 24-hours.

At one point, the queue grew so long there were two queues just to join the actual queue. However estimates at the back of the queue, which tonight backs up to Southwark Park, suggests the wait time is currently in the region of 14 hours.

Among the crowds yesterday was David Beckham, who wiped a tear from his eye as he approached the Queen’s coffin following a 13-hour wait on Friday, after admitting to television cameras: ‘I thought it’d be quieter coming at 2am… I was wrong!’

The football legend, 47, was among thousands to join the five-mile queue and purchased a box of doughnuts to share with his fellow mourners, managing to avoid detection for hours because of the ‘mutual respect’ he shared with them.

As the former England Captain finally reached the end of the line, a changing of the guard took place while broadcast cameras hovered on him as he watched on solemnly.

Beckham, a father-of-four, was emotional as he waited his turn to pay his respects alongside the crowd of thousands, seen wiping the corner of his eye and covering his mouth with his hand as he approached the front of the procession.

The former Manchester United midfielder finally reached the Queen’s coffin at about 3.30pm after lining up for 13 hours, and took just a few seconds to bow his head before moving on to make way for the people behind him.

When Beckham was finally spotted in the crowd, he spoke with ITV news about what prompted his decision to wake up and join the hundreds of thousands of other mourners expected to visit the Queen as she lies in state.

It comes as the organisers today warned that wait times to see the Queen as she lies in state at Westminster Hall had stretched to as long as 24-hours. At one point, the queue grew so long there were two queues just to join the actual queue.

He recalled the ‘special moment’ he was awarded an OBE and looked back fondly on the relationship he had fostered with the monarch over the years.

‘To receive my OBE, I took my grandparents with me, who were the ones that really brought me up to be a huge royalist and a fan of the royal family, and obviously I had my wife there as well,’ he said.

‘To step up, to get my honour, but then also Her Majesty, to ask questions, to talk, I was so lucky that I was able to have a few moments like that in my life, to be around Her Majesty.

He added: ‘I think it’ll take a long time to understand [the Queen’s death] because I think Her Majesty meant so much in so many different ways.’

Beckham said he will forever consider himself lucky to have met the Queen on so many occasions.

By Darren Boyle for MailOnline

A bungling rollerblader nearly crashed into King Charles’ car minutes before he mounted a vigil in honour of his mother, the Queen.

The man had to be tackled by police as the royal cavalcade entered Parliament Square at approximately 7.40pm yesterday.

The man tried to cross the road as the new king was making his way to Westminster Hall for another vigil for his late mother.

Met Police officers on foot managed to tackle the man and bring him to the ground allowing King Charles III to continue his journey without further problem.

‘An officer on foot quickly intervened, bringing the man to the ground in order to stop him from continuing.

‘The man was subsequently spoken to by officers before being let on his way.’