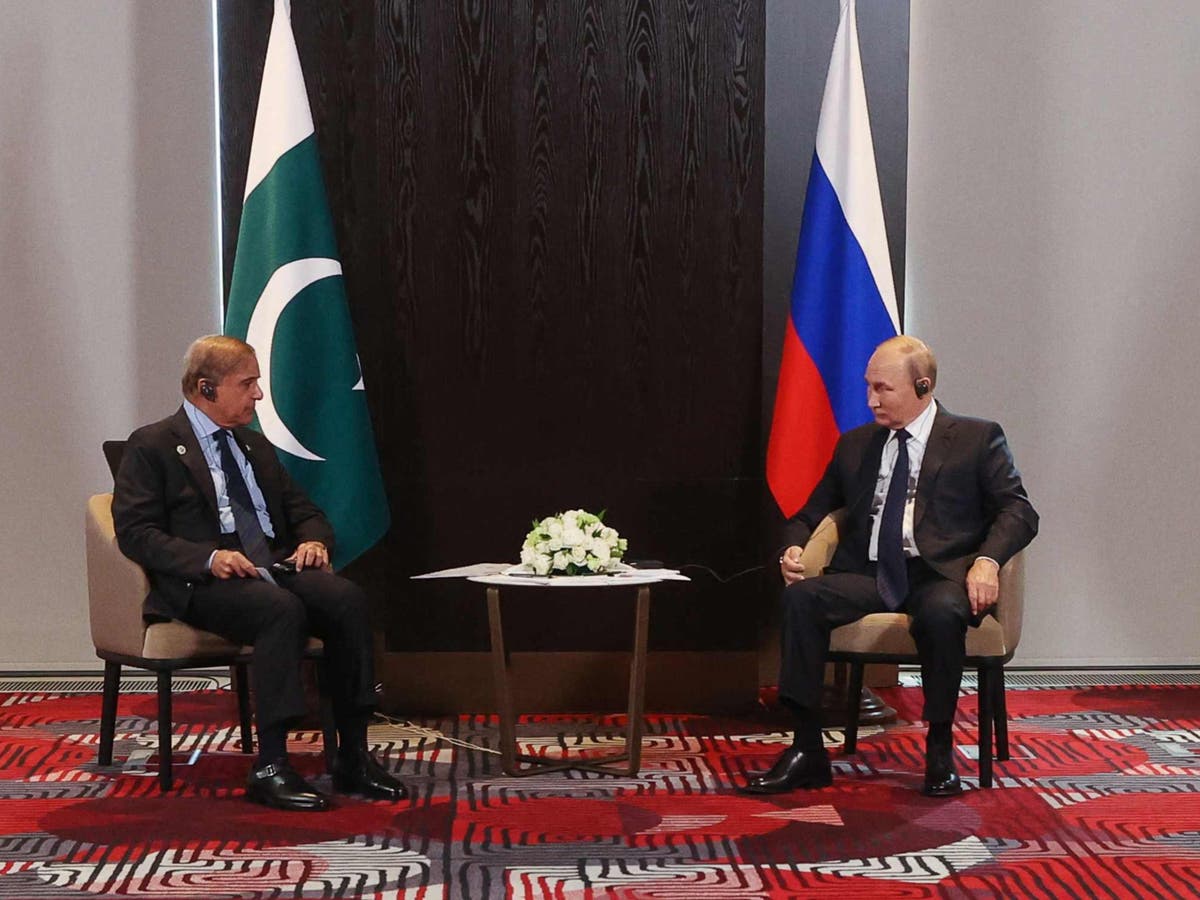 Pakistan prime minister Shehbaz Sharif‘s awkward struggle with an earpiece evoked laughter from Russian president Vladimir Putin during their meeting on Thursday on the sidelines of the Shanghai Cooperation Organisation (SCO) summit in Uzbekistan.

At the beginning of the meeting, Mr Sharif failed to put the earpiece in place before asking for help. “Can somebody help me,” asked the prime minister.

The device fell off Mr Sharif’s ear again after someone helped him with it, triggering a burst of audible laughter from the Russian president.

Eventually, an official helped the Pakistani leader put on the earphone properly for the meeting to commence.

Back home in Pakistan, Mr Sharif was criticised by the opposition party for his “clumsy” behaviour.

She added: “Even president Putin had to eventually just laugh at this clumsy man. Pathetic.”

Mr Sharif arrived in the historic city of Samarkand on a two-day visit on Thursday to attend the 22nd SCO summit, which resumed after two years due to Covid-19.

The prime minister on Friday, in an emotional statement, highlighted Pakistan’s catastrophic floods, that have killed over 1500 people and impacted 33 million people out of the country’s 220 million population.

“I have never before seen this kind of devastation,” he said, while urging action against climate change.

“But … these devastating floods in Pakistan are most definitely climate change-induced…. cloud outbursts, unprecedented rains combined with hill torrents, all of this put together made Pakistan look like a sea of water,” he said at the Council of Heads of State meeting.

In a first, a scientific study has found that the climate crisis had a role in the country’s historic floods by intensifying the rainfall in the region by 50-75 per cent.

Mr Sharif appealed to the leaders present at SCO to “build a wall” against climate change, adding that it can only be achieved through a sustainable plan.

“Our carbon emission is less than one per cent. Yet nature had this in store for us.”

According to the country’s national disaster management authority, the floods since mid-June are estimated to have damaged 1.8 million homes, washed away roads and destroyed nearly 400 bridges, while more than half a million people have been left homeless.

The prime minister added Pakistan would need “billions of dollars” to overcome the crisis.