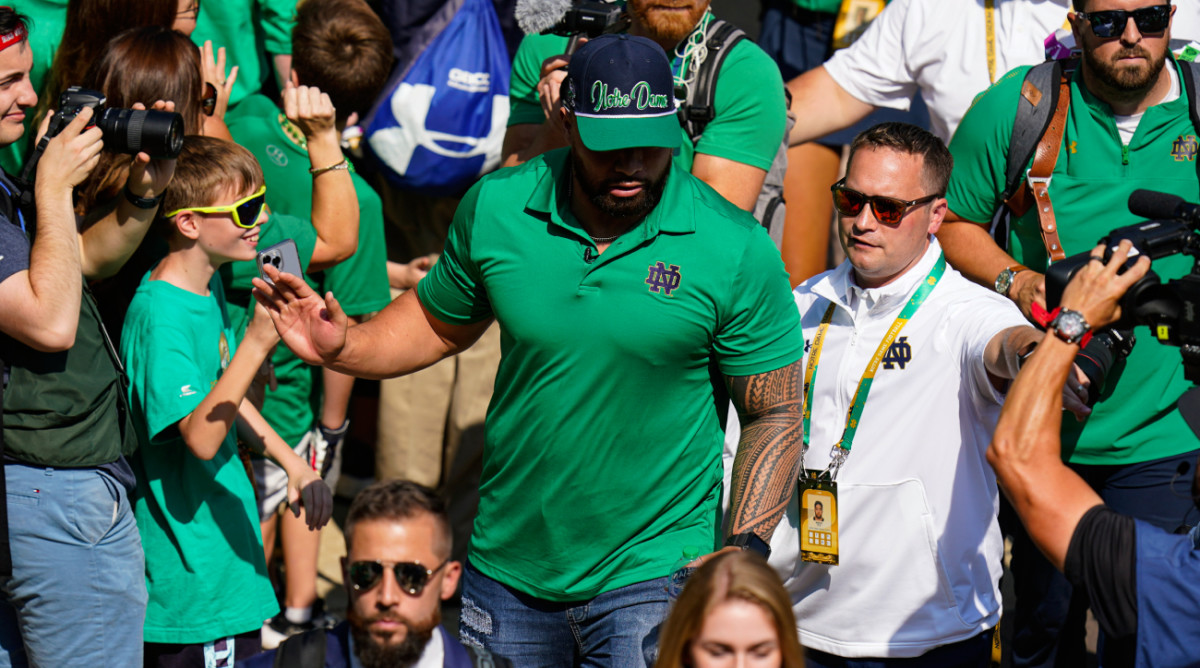 Notre Dame fans on-hand for Saturday’s game against California were treated to a special moment with the return of former star linebacker Manti Te’o to campus.

Making his first public appearance at Notre Dame in over a decade, Te’o received a warm welcome at every stop as he looked to lend his support to his alma mater ahead of the matchup.

The Fighting Irish honored Te’o, a Heisman runner-up during his legendary senior season in 2012, with a shout-out on the jumbotron before the game and sent the crowd into a frenzy just prior to kickoff.

Te’o’s emotional return to South Bend comes amid an increased amount of exposure in his story after Netflix released a documentary, titled The Girlfriend Who Didn’t Exist, in August. The two-part film chronicles the infamous catfishing hoax Te’o became involved with after it was revealed his supposed girlfriend, “Lennay Kekua,” didn’t actually exist right as he reached the apex of his collegiate career.

During a conversation with reporters on Saturday, Te’o, who was interviewed and prominently featured in the documentary, spoke on the positive response he’s received since the film premiered.

“All the facts are out there and I’m happy with it because it’s factual. … Since Day 1, it’s been nothing but positive,” he said, per The Associated Press.

While some fans may choose to remember the hoax as the biggest part of his journey, Te’o will be forever remembered by Fighting Irish fans for his tenacity and dominance on the field. Before the game, the beloved linebacker spent time embracing the community he still calls home and even offered a rousing speech after attending Mass with the team.

Te’o also attended Mass with the team before walking with them to the stadium, where he briefly stopped with coach Marcus Freeman to address the crowd.

“Man it’s always good to be home. There’s no place like home,” Te’o said in a video shared by On3’s Tyler Horka. “But I want to make this real clear: this is not about me, this is not about one person, this is about this whole family. It’s about this whole family. If you want to go fast, go alone, if you want to go far, go together. … And this team needs all of us.”

With Te’o’s words echoing across campus, the Fighting Irish hope to channel that energy into an early-season turnaround after losing their first two games by a combined 16 points.