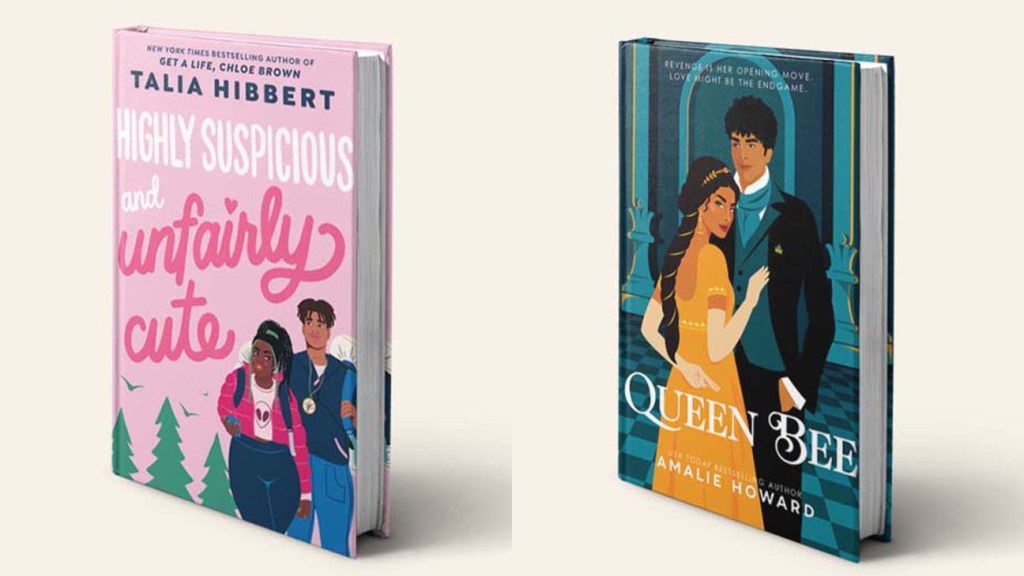 Authors and married couple Nicola and David Yoon are self-described “romantic goobers.” So much so that after meeting in college, they quickly became friends, engaging in conversations about art, poetry, literature and, yes, even their love for romantic comedies and novels. There was one caveat to these rom-coms: They were all “exclusively white.”

“These movies are so important to us and they mean so much to us, and yet not a single one starred someone who looked like us,” David Yoon, a Korean American author, tells The Hollywood Reporter. “We’re like, isn’t that strange? It’s almost like they don’t believe that we fall in love, but obviously, we do fall in love. I mean, we fell in love with each other.”

After the couple, now married for nearly 20 years, became published authors — with Jamaican American writer Nicola releasing bestsellers-turned-feature films The Sun is Also a Star and Everything, Everything and David behind fellow bestseller Frankly in Love — their journey led them to seek a way to broaden the narrative horizons within the romance genre and offer stories that readers can actually see themselves in, as they themselves wished for as well.

“It wasn’t until Nicki got published and then I got published and especially when Nicki took some big chances for The Sun is Also a Star,” David says of the adaptation that starred Yara Shahidi and Charles Melton. “The main romantic leads are two kids who looked like us. One was Jamaican American, one was Korean American. That wound up being adapted and then suddenly you have these people up on screen and we’re like, ‘OK, this is really important.’ That validating impact of seeing people who look like you on screen is just undeniable.”

He also explains, “It wasn’t up until recently that a lot of [books], especially YA contemporary romance, only had white people on the covers. Suddenly within the last handful of years, it’s suddenly OK to put Black girls and boys on covers which had never been OK before. The fact that things are changing for the better, we’re like, ‘We got to do this. Now is the time to launch the imprint.’”

The authors launched Joy Revolution in 2020, with a commitment to publish young adult romance novels starring people of color written by people of color. The intent of the imprint lies in the name itself, with the authors dedicated to bringing stories that spark joy and offer a safe space to readers while revolutionizing a media landscape where people of color have been commonly erased as leading characters.

David and Nicola note that stories featuring characters of color often have a focus on the “struggle or trauma” or the characters exist to “teach a largely white audience about racism.” While these stories are important, otherwise they’d “be forgotten and that awareness would be lost,” both reiterate that “there’s a whole other side to our existence besides trauma.”

“We don’t wake up thinking, ‘Oh, I’m Black,’ or ‘I’m Asian,’” David explains. “Depicting people of color just as being human and experiencing all the normal things is quietly revolutionary …  When you’re exposed to that experience that’s so missing from media, then it’s a revolution.”

Joy Revolution is ready to introduce that truth through love stories, with its first list publishing in spring 2023 that will feature young adult novels from bestselling authors Talia Hibbert and Amalie Howard.

Highly Suspicious and Unfairly Cute by Hibbert (on sale Jan. 3, 2023) centers on a quirky content creator and athlete testing their abilities to survive both the great outdoors and each other. “It’s snarky and it’s dry and it’s hilarious,” they tease of the book, recalling both of them laughing the whole way through reading it. The novel is Hibbert’s first young adult romance and offers banter and swoon-worthy moments while also raising mental health awareness through her characters. “I’ve been a fan of Talia’s for a long time,” Nicola says. “I’ve read everything. We asked her to write young adult for us and she said ‘yes,’ shockingly!”

Meanwhile, Howard’s historical romance Queen Bee (on sale April 4, 2023), described as a “Bridgerton meets The Count of Monte Cristo,” chronicles the story of a teen girl who’s seeking retribution against her backstabbing former best friend. However, things may not go as planned after she catches the eye of a familiar handsome marquess.

“It was an early draft and I just tore through it,” David recalls, also noting the book has “a strong element of Indian culture” that exists in the backdrop.

“We’re like proud parents,” Nicola says of the upcoming titles. “We’re so proud of our authors and we’re just gonna sit back and let the world discover their books now.”

The Joy Revolution team acquired world rights for Highly Suspicious and Unfairly Cute from Courtney Miller-Callihan at Handspun Literary, and world rights for Queen Bee from Thao Le at Sandra Dijkstra Literary Agency. Both books are available for pre-order now.

“Love is transformative and transcendent and the books need to know that. That’s one of the things we really look for,” Nicola says of the books they aim to publish under their imprint.

Other upcoming titles include You Bet Your Heart by Danielle Parker, described as “a heartfelt childhood best friends to academic rivals to lovers story”; House Party, edited by justin a. reynolds, a novel set during an end-of-year party; Sinner’s Isle by Angela Montoya, a fantasy novel centered on the romance between a witch and pirate; and Caught in a Bad Fauxmance by Elle Gonzalez Rose, a “queer fake-dating contemporary rom-com following two feuding families.”

“Talia and Amalie are fantastic storytellers and genuine people whose values and interests align perfectly with Joy Revolution’s mission,” says Ragin. “Their beautifully written novels really set the tone for this new imprint, and I could not be happier about the strong start to Joy Revolution’s list.”

In addition to keeping busy with their imprint, the authors’ production banner Yooniverse Media inked a deal with Anonymous Content for original film and television content both created and curated by the authors. The authors admit they’re hopeful they’ll get the chance to adapt books that are published under their imprint: “We are definitely hoping to get that done. We’re just starting to learn about that world. Hollywood’s so different from publishing.”

While working on their imprint and production banner, both David and Nicola will also continue to write their individual novels. Nicola is writing her first novel for adults, while David recently published City of Orange. David’s YA novel Frankly in Love is also being adapted by Paramount Players and Alloy Entertainment. Despite a busy slate, the two marvel that they’re able to help play a part in making a difference for readers through these stories.