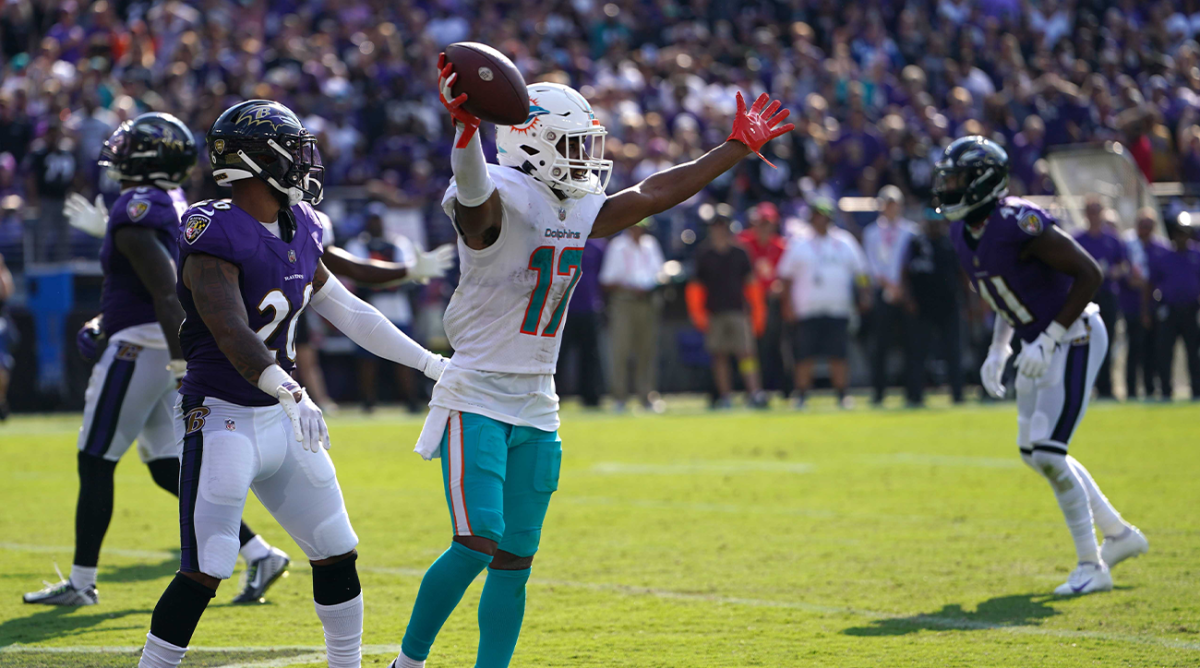 We all know “The North Remembers,” but Week 2 is one week the AFC North will want to forget forever. Take a look at this ugliness:

Ravens: Lose 42-38 at home to the Dolphins as 3.5-point favorites despite leading 35-14 entering the fourth quarter.

Browns: Lose 31-30 at home to the Jets and a backup quarterback as 6.5-point favorites despite leading 30-17 with less than two minutes remaining.

Bengals: Lose 20-17 at the Cowboys as 7.5-point favorites after allowing a backup quarterback to engineer a game-winning drive.

Steelers: Lose 17-14 at home to the Patriots as 2.5-point underdogs (This is the least-egregious loss of the bunch but still not a good outcome).

We hope you didn’t bet on any of those teams who went 0-4 both straight-up (SU) and against the spread (ATS). The flip side is that two of those losses provided AFC East teams with epic wins as underdogs, especially the Jets.

Here’s the good, the bad and the ugly from Week 2 NFL betting.

Bet on the NFL at SI Sportsbook

Let’s give it up for the Jets and the Dolphins, both rallying from double-digit deficits against AFC North foes to win.

The Jets—Yes, the Jets—rallied from 13 points down in the last two minutes to stun the Browns and win as +225 underdogs. It seemed like the Jets may not even cover the 6.5-point spread, but Joe Flacco engineered two touchdown drives, aided by an onside kick, to complete the legendary comeback win.

The Dolphins’ high-powered offense showcased its full potential to stun a Ravens team that looked like a juggernaut through seven quarters. Tua Tagovailoa tossed four of his six touchdown passes in the fourth quarter. allowing Miami to rally from a 35-14 deficit and win outright as a +155 underdog.

The aforementioned Dolphins-Ravens game rewarded those who bet on the over for player props.

We hope you started them in fantasy as well (unlike yours truly, who benched Bateman in favor of Brandon Aiyuk in one league).

Betting on the Seahawks and Geno Smith to crash back to earth after their inspired showing in Week 1 against the Broncos proved successful.

The poor performance by the Seahawks against the 49ers contributed to the under cashing despite the second-lowest over/under of the day (39.5 points).

We’re going to give props to Cooper Kupp since it seems he can clear his props no matter how high they are set.

He now gets a terrible Cardinals defense in Week 3.

One intriguing bet for Sunday may have been to bet on the over for Joe Burrow’s rushing yards prop of 11.5 yards against the Cowboys since the Bengals’ offensive line struggled mightily in their Week 1 home loss to the Steelers.

Burrow rushed four times for 26 yards in Sunday’s loss, while he failed to clear his passing touchdowns and passing yards props. The Cowboys’ defensive line got after Burrow, and it seems Cincinnati’s offensive line is a massive issue again.

Here are some notable payouts for first, last and anytime touchdown props.

Where Are The Points?

The under had another strong Sunday with eight of the 13 games failing to clear their points projection. We should have known it would be another low-scoring Sunday after the Chargers-Chiefs matchup failed to live up to expectations.

The over has cashed in both Lions, Falcons, Commanders and Browns games.

The No. 1 pick in fantasy drafts disappointed in what should have been a smash matchup against the Jaguars.

Taylor and the Colts also failed to score, burning those who bet on Taylor at heavy -250 anytime touchdown odds.

Mike Evans has struggled when pitted against cornerback Marshon Lattimore in, and the two have a years-long beef.

While it seemed tempting to bet on under 58.5 receiving yards for Evans on Sunday (he had five catches for 62 yards against the Saints spanning two games last year), he finished with three catches for 61 yards to clear his prop before both he and Lattimore were ejected for their in-game fight.

Lattimore did hold Evans under his receptions prop of 4.5, but the ejection may have had more to do with that.

After flopping in Week 1, Pitts again disappointed by catching two balls for 19 yards and failing to clear his props of 3.5 receptions and 45.5 yards.

Pitts, drafted as the third tight end in some drafts, has four catches for 38 yards on the season. Yes, the season. You read that right.

The AFC North’s 0-4 Sunday included three losses as favorites and two to backup quarterbacks. Baltimore lost as a -188 favorite, the Browns fell as -275 favorites, and the AFC champion Bengals faltered as -333 favorites to fall to 0-2.

While the Bengals never had a shot at covering, the Ravens and Browns both could have at least covered if their defenses had not taken the fourth quarter off.

Anything But A Touchdown

Those who bet on under 51.5 points in the Cardinals–Raiders game have to be sick to their stomachs this morning following Arizona’s 29-23 win.

The Raiders led 23-7 with less than four minutes remaining but allowed two touchdown drives and two-point conversions to tie the game, the latter occurring on fourth down as time expired. Kyler Murray completed a miraculous two-point conversion to A.J. Green on that second touchdown to send the game to overtime.

Following an Arizona punt to start overtime, Las Vegas drove into Arizona territory in overtime, but Hunter Renfrow fumbled. Arizona’s Byron Murphy Jr. scooped the ball and returned it to the house to end the game with 52 points.

A Las Vegas defensive stop or overtime field goal would have secured the under.

If you bet on receiving yards props in Giants-Panthers … yikes.

Only one of the eight players listed at SI Sportsbook (Giants tight end Daniel Bellinger) cleared his prop. That meant DJ Moore, Robbie Anderson, Christian McCaffrey, Saquon Barkley, Sterling Shepard and Kenny Golladay all went under. Only Shepherd cleared his receptions prop among that group of six players.

The Rams failed to cover as 8.5-point home favorites against the terrible Falcons in their 31-27 win despite leading 31-10 in the fourth quarter.

Los Angeles allowed consecutive scores to cut it to a six-point game late and needed a late interception by Jalen Ramsey to avoid a potential horrific loss.

The Rams are now 0-2 ATS after being destroyed by the Bills in the opener.

Davante Adams caught a one-yard touchdown pass on the Raiders’ first drive Sunday. He then caught one pass for 11 yards the rest of the game against a poor defense. He posted a final line of two catches, 12 yards and one touchdown.

Adams’s props were set at 7.5 catches and 92.5 receiving yards, and he was facing a terrible defense. This seemed like a smash spot.

He instead pulled a disappearing act.

Here are some players you may have bet on Sunday who essentially failed to show up. Their props are listed in bold and their totals after the colon.