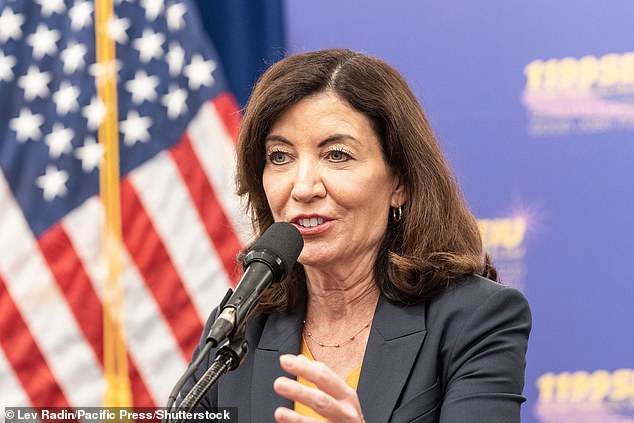 The announcement comes as monkeypox cases rise in New York City, the current US epicenter of the outbreak, where case counts passed 1,400 on Friday.

Hochul tweeted: ‘I am declaring a State Disaster Emergency to strengthen our ongoing efforts to confront the monkeypox outbreak.

‘This Executive Order enables us to respond more swiftly, and allows health care professionals to take additional steps that will help get more New Yorkers vaccinated.’

Hochul continued: ‘More than one in four monkeypox cases in this country are in New York, currently having a disproportionate impact on at-risk groups.

‘We are working around the clock to secure more vaccines, expand testing capacity, and educate New Yorkers on how to stay safe.’

Monkeypox is currently hitting gay men the hardest, with an estimated 95 per cent of US infections occurring among them. New York City is home to one of the United States largest LGBT communities, and is in line to receive 110,000 doses of the federal governments 800,000 upcoming monkeypox vaccines – but Hochul still wants more.

New York Governor Kathy Hochul declared the monkeypox disease an emergency in her state, making New York the first state to do so

‘New York City is currently the epicenter of the outbreak, and we estimate that approximately 150,000 New Yorkers may currently be at risk for monkeypox exposure,’ he continued in the statement.

Hochul echoed the fear and told reporters Saturday ‘what we’re seeing are signs where it could escalate dramatically.’

‘When I’m making the case to the federal government that we need more doses, more than we’ve been previously allocated, I can demonstrate there is high demand and need,’ Hochul continued

The announcements are mostly made to trigger emergency administrative functions, such as increasing the pool of people eligible to administer vaccines.

It also allows physicians and nurses practitioners to give out the shout, and also makes sure vaccine providers send data to the state government.

New York is anticipating 110,000 vaccines from the federal government, of which 80,000 will go to New York City.

Hochul emphasized there is an acute danger ‘particularly in the gay male population,’ but said ‘we’re going to protect them. We’re not going to sweep this under the rug.’

No deaths have been registered in the country to date but several patients have been hospitalized.

The United States has become the global epicenter of the monkeypox outbreak, overtaking Spain following a record-breaking 24 hours in which 1,048 new cases were confirmed.

The updated data for Wednesday shows that there are now 4,639 confirmed cases in the U.S.

Spain has the most per capita cases of monkeypox, while the U.S. has the greatest total number

The Centers for Disease Control and Prevention (CDC) said on Wednesday that the uptick in cases was likely due to an increase in testing, after it expanded capacity from 10,000 to 80,000 swabs per week.

By population — which takes into account the U.S. having seven-times more people than Spain — America has about one case per 100,000 people.

In the U.S. cases were initially mostly linked to international travel, particularly to Europe, but many are now being detected in people who became infected in the country. Experts suggest the virus may have been transmitting for a while before it was detected.

Hotspots New York City and Washington D.C. are rolling out vaccines against the virus to gay or bisexual men with multiple partners in two weeks to put a lid on the virus, but these programs have hit a brick wall with too few doses being supplied by the Federal Government.