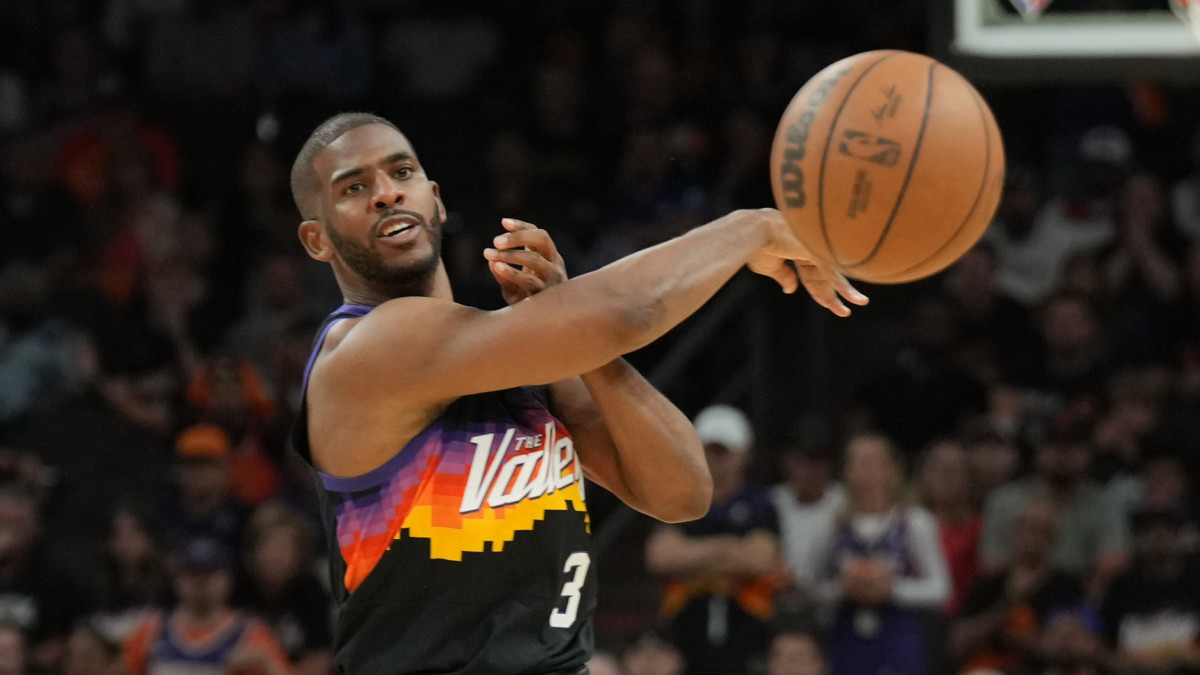 If you’re reading this on SI.com, you can sign up to get this free newsletter in your inbox each weekday at SI.com/newsletters.

Three guys who stole the show

The first weekend of the NBA playoffs is in the books, and the story of the series openers was all the stellar individual performances. The Warriors’ Jordan Poole dropped 30 points in his postseason debut on Saturday, the same day the Sixers’ Tyrese Maxey erupted for 38 and Ja Morant (32 points) and Anthony Edwards (36) dueled in the Timberwolves’ upset win over the Grizzlies.

Yesterday’s games were no different. Let’s take a look at three players who stood out.

We’ll start with the most unlikely breakout star of the day. The Heat made quick work of the Hawks in the first game of their series, completely shutting down Trae Young (eight points on 1-of-12 shooting), but it wasn’t Jimmy Butler who led the way for Miami. Robinson came off the bench and couldn’t miss.

Robinson became the 11th player in NBA history to score at least 27 points while shooting at least 90% from the floor and the first player to do so while attempting even one three-pointer. (Other players on the list include Dikembe Mutombo, Yao Ming and David Robinson.)

It was an important breakout game for Robinson, who had been pulled from the starting lineup late last month after a disappointing stretch of games (including a 31-minute scoreless outing against the Nets on March 3).

“Duncan needed that,” veteran Kyle Lowry said after the game. “For us, we need that as a team. We’re happy for him and we just gotta continue to build on it. For [Duncan], just continue to fire the ball like he was. We just need him to fire the ball and shoot the ball with the confidence he did tonight, because he shot the ball extremely confident tonight. Every shot he took looked good.”

CP3 turned back the clock in the Suns’ win over the Pelicans, recording his first 30-point, 10-assist game since 2018. At 36 years, 346 days old, he’s the oldest player to ever put up those numbers in a playoff game.

Paul took over in the fourth quarter as the Pelicans tried to mount a comeback. He scored 19 of Phoenix’s 31 points in the final period and assisted on another two baskets.

​​“That man is a true competitor and a true winner,” Devin Booker said after the game. “When he wants it that bad, you can see it in his demeanor and see it in his walk, so it shouldn’t surprise anyone. He’s built for these moments.”

The opening game of the Nets-Celtics series lived up to the billing. It was a back-and-forth game that ended on Jayson Tatum’s layup at the buzzer (the first buzzer beater in Boston home playoff history). Tatum was fantastic, leading the Celtics with 31 points (one of four Boston players who scored at least 20), but it was Irving who stood out.

He made Boston’s league-best defense look pedestrian while torching it for 39 points, showing what the Nets were missing all year when Irving was ineligible to play in home games. But as spectacular as he was, Brooklyn fell just short.

Kyrie relished playing the role of the villain in the city he once called home. He probably has a fine headed his way after he gave Boston fans the finger at least once. Video also surfaced of a fan telling Irving, “Kyrie, you suck,” as he walked to the locker room at halftime, to which Irving replied, “Suck my d—, b—-.”

​​“I’mma have the same energy for them,” Irving said of his interactions with the hostile crowd. “And it’s not every fan; I don’t wanna attack every fan, every Boston fan. When people start yelling ‘p—-’ or ‘b—-’ and ‘f— you’ and all this stuff, [there’s] just so much you can take.”

The best of Sports Illustrated

Continuing with the NBA playoff theme, today’s Daily Cover, by Chris Herring, is about how the Raptors’ length makes them a force to be reckoned with:

“The Raptors’ arm lengths make routine passes nearly impossible for opponents. They deflect more passes than any NBA team and force turnovers at the highest rate in the league. It’s a huge part of the reason that opponents take longer to find shot attempts against Toronto than almost anyone else, according to data site Inpredictable. On some level, this long-limbed team makes shooters and passers think more than they’d like to from one play to the next.”

Kyrie Irving had his way with the top-ranked Celtics defense, but Boston got a stop when it mattered most, Chris Mannix writes. … Michael Pina wrote about the fascinating chess match at the center of the Nuggets-Warriors series: Draymond Green vs. Nikola Jokić. … Saturday’s FA Cup semifinal was the latest installment in the growing rivalry between Liverpool and Manchester City, Jonathan Wilson writes.

Around the Sports World

Japanese phenom Roki Sasaki almost threw back-to-back perfect games but was pulled after eight perfect innings and 102 pitches yesterday. … Longtime Blue Jays announcer Buck Martinez is stepping aside after being diagnosed with cancer. … Barcelona fans are planning a protest for later today after more than 30,000 fans of German club Eintracht Frankfurt were able to attend last week’s Europa League game at the Camp Nou. … Yankees pitcher Nestor Cortes threw a rare immaculate inning yesterday against the Orioles, but catcher Kyle Higashioka threw the ball into the stands. (Gerrit Cole got it back.) … Reds rookie Hunter Greene threw 39 pitches over 100 mph in his start against the Dodgers on Saturday, the most since pitch tracking began in 2008.

3. Giannis tosses it off the backboard to himself

2. Marcus Smart steals the inbounds pass and goes in for the dunk

1. Jayson Tatum’s game-winner at the buzzer

The longest game in professional baseball history—between the Pawtucket Red Sox and Rochester Red Wings—began on this day in 1981. How many innings did they play before the game was suspended?

Friday’s SIQ: Who was the last Black player to wear Jackie Robinson’s No. 42?

Answer: Mo Vaughn. He was also the second-to-last player to wear No. 42, behind Mariano Rivera.

Vaughn requested the number when he was called up to the majors by the Red Sox in 1991, recalling what his coach at Seton Hall, Nick Bowness, had told him years earlier. Here’s what Vaughn told the New York Post in 2002, before his first season with the Mets:

“[Bowness] took me aside and said if I ever had the opportunity to wear his number, I should,” Vaughn said. “He told me to go look up the information about [Robinson] and learn what kind of person he was. I looked up the information and found there was a tremendous man behind the number, representing everything about life. Forget about baseball.

“He integrated society, being that he just played baseball,” Vaughn continued. “I always felt what he went through gave every minority athlete in every sport the opportunity to play. Michael Jordan wouldn’t be Michael Jordan. Tiger Woods wouldn’t be Tiger Woods. All the great Black athletes … got their opportunity to do what they’re doing because [Robinson] took the brunt of it all.”

Vaughn told MLB.com last year that he didn’t wear Robinson’s number in the minors because the jersey numbers didn’t go that high. When he was called up to the big leagues, he initially thought he’d wear No. 44, before remembering what Bowness had said.

Vaughn’s father, Leroy, was a pioneer in his own right. Leroy starred as a quarterback at Virginia Union University and caught the eye of NFL scouts. In 1955, he was signed by his hometown Baltimore Colts and became the first Black player to be listed on an NFL roster as a quarterback since Fritz Pollard in the ’20s. Leroy did not appear in any games for the Colts in his one year with the team and went off to join the Army. He and his wife, Shirley, settled in Norwalk, Conn., where Leroy became the assistant principal and football coach at Brien McMahon High School.

Leroy instilled a sense of civic responsibility in he and Shirley’s three children.

“The reflection of Leroy Vaughn that his son most vividly carries with him is of Christmas morning,” the Boston Globe’s Peter Gammons wrote in 1992 (as quoted in Vaughn’s SABR biography). “‘We would go with our parents every year to distribute gifts and visit the homeless,’ Vaughn said. Giving back to the community was sewn into the fabric of Vaughn’s upbringing, ‘It was something that was an important part of their Christmas tradition, and we the children were always a part of it.’”

The cover story from the April 18, 1960, issue of Sports Illustrated highlights the stark contrast between women’s sports today and before the passage of Title IX in ’72.

At the 1956 Summer Olympics, 15-year-old American Carin Cone won the silver medal in the 100-meter backstroke. She and England’s Judy Grinham finished with identical times of 1:12.9, a new world record, but in the absence of a replay system, deciding the winner was left up to a panel of judges. According to Kenneth Rudeen’s article, Cone “almost certainly would have retired from world class competition” if she had won the gold but instead decided to train for the ’60 Games in Rome.

She enrolled at the University of Houston because, Rudeen wrote, coach Phill Hansel was “one of the few topflight college coaches who took women swimmers seriously.” Houston did not take women’s swimming seriously, however, and, before the end of Cone’s first semester in 1958, abruptly canceled plans to sponsor a team.

Most of the swimmers transferred to other schools. Cone stayed at Houston to continue training under Hansel, but not being part of a varsity program made that difficult. Hansell had to look far and wide across the Houston metro area for pools where Cone and her training partners Brenda Dietz and Eileen Murphy could swim.

In the winter, they swam in a 20-yard outdoor pool (less than half the size of an Olympic pool) at a local swim club. The water was heated but it wasn’t much help.

“It wasn’t too bad except at the last when I had to swim backstroke,” Cone wrote in her diary. “My nose froze from one end to the other; it would just about get all thawed out during the turns. Then it would freeze again. Phill bravely stood by the edge of the pool and held our beach towels for us.”

By February 1960, Hansell had secured a pair of indoor pools for the women to train in. In the morning, they would spend 90 minutes swimming at a junior high school in the Houston suburb of Pasadena. In the afternoon, they had 90 minutes reserved at a high school in Bellaire, on the opposite side of town. In between, they went to class.

Cone took home two gold medals at the Pan American Games in the summer of 1959 (in the 100m backstroke and as part of the 4x100m medley relay team) but did not qualify for the Olympics in Rome.

Check out more of SI’s archives and historic images at vault.si.com.