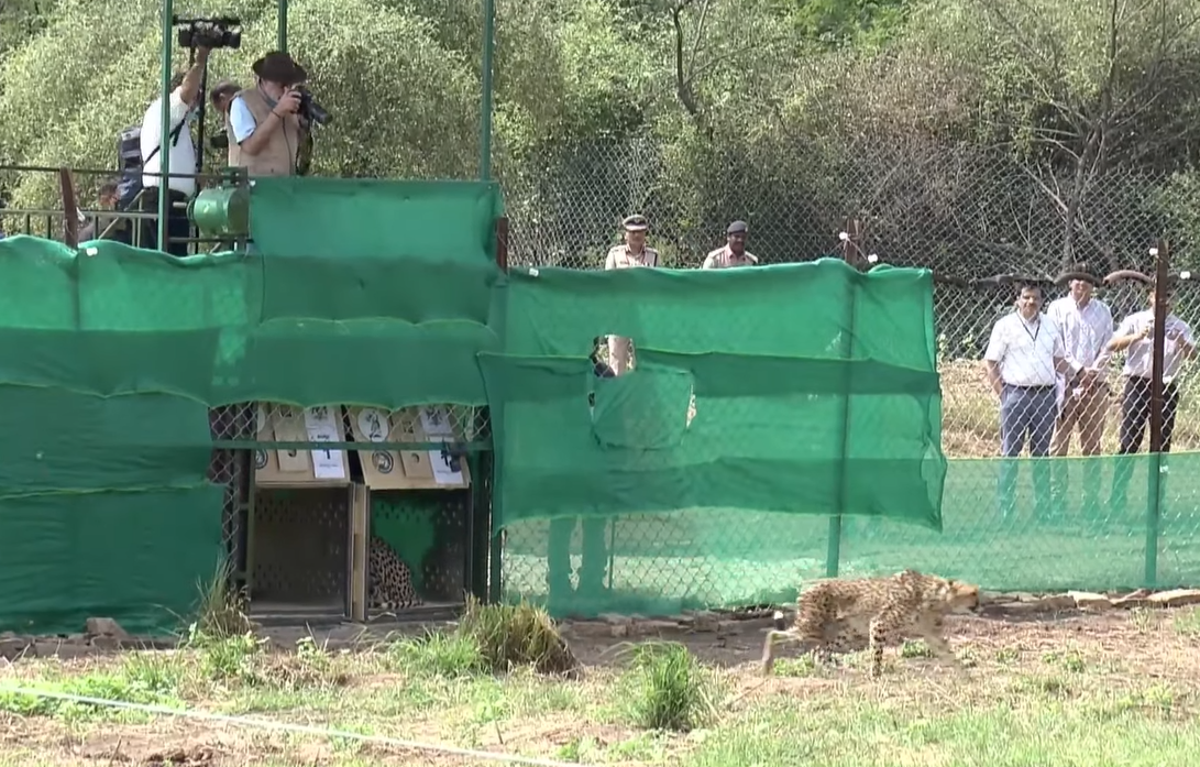 Prime minister Narendra Modi marked his birthday on Saturday by releasing eight Namibian cheetahs into an Indian national park, overseeing the return of the big cats to the country seven decades after they were declared extinct.

Videos released on Mr Modi’s social media profiles showed the cheetahs taking their first steps on Indian soil in an enclosure at Kuno National Park. The contentious “Project Cheetah” aims to repopulate India with the vulnerable animal some 74 years after they were hunted to extinction.

Dressed in camouflage attire, Mr Modi was seen stood atop a viewing platform and personally cranking open the doors of the cheetahs’ crates, after which the big cats quickly walked out to inspect the space where they will be quarantined for a month from Saturday morning.

The eight Namibian wild cats, which include three male and five female adult cheetahs aged between two to five-and-a-half years old, were seen roaming around the compact enclosure built to help them acclimatise to their new home in central Madhya Pradesh state.

Mr Modi, who was celebrating his 72nd birthday on Saturday, was also seen wearing a safari hat and capturing photos of the South African cats with his long-lens camera. In comments to mark the occasion, he cautioned other Indians to be “patient” for their own opportunity to see the animals.

“Decades ago, the age-old link of biodiversity was broken, today we have a chance to reconnect it. Today the cheetah has returned to the soil of India,” the prime minister said.

All the big cats were vaccinated, fitted with a satellite collar, and brought to India in a tranquillised state, covering 8,000 km (5,000 miles) in an 11-hour transcontinental journey from Namibia capital Windhoek.

Speaking after they were fully revived at the other end of the journey in Kuno, Mr Modi said: “Along with these cheetahs, the nature loving consciousness of India has also been awakened with full force.”

Officials involved in the project from the Namibia-based Cheetah Conservation Fund have said that these cheetahs – the fastest land animal on Earth – were handpicked based on an assessment of their health, disposition, hunting skills, and ability to contribute genetics that will result in a strong founder population in India.

The cheetahs will spend around a month in the 5 sq km enclosure, following which they will be released into the 750 sq km of Kuno as a whole. In these larger grasslands they will largely be left to fend for themselves, to hunt their prey and compete for territory with other wild animals like leopards, striped hyenas, wild bears and migrating tigers.

India has 12,852 leopards, according to the government’s data from 2020, which saw their population record a rise of more than 60 per cent after 2014.

Senior wildlife conservationists in both India and Namibia have expressed their scepticism at the idea of shifting cheetahs from African savannahs to the Asian jungle and exposing them to greater risks in an unfamiliar terrain.

The cheetahs arriving from Namibia are actually a distinct subspecies – the Southeast African cheetah – to the Asiatic cheetahs that used to roam free India and now only exist in tiny numbers in Iran.

One of the oldest of the big cat species, cheetahs trace their ancestry back about 8.5 million years.

The predator was once widely dispersed throughout Asia and Africa in great numbers but in the present day fewer than 7,500 remain on the planet.