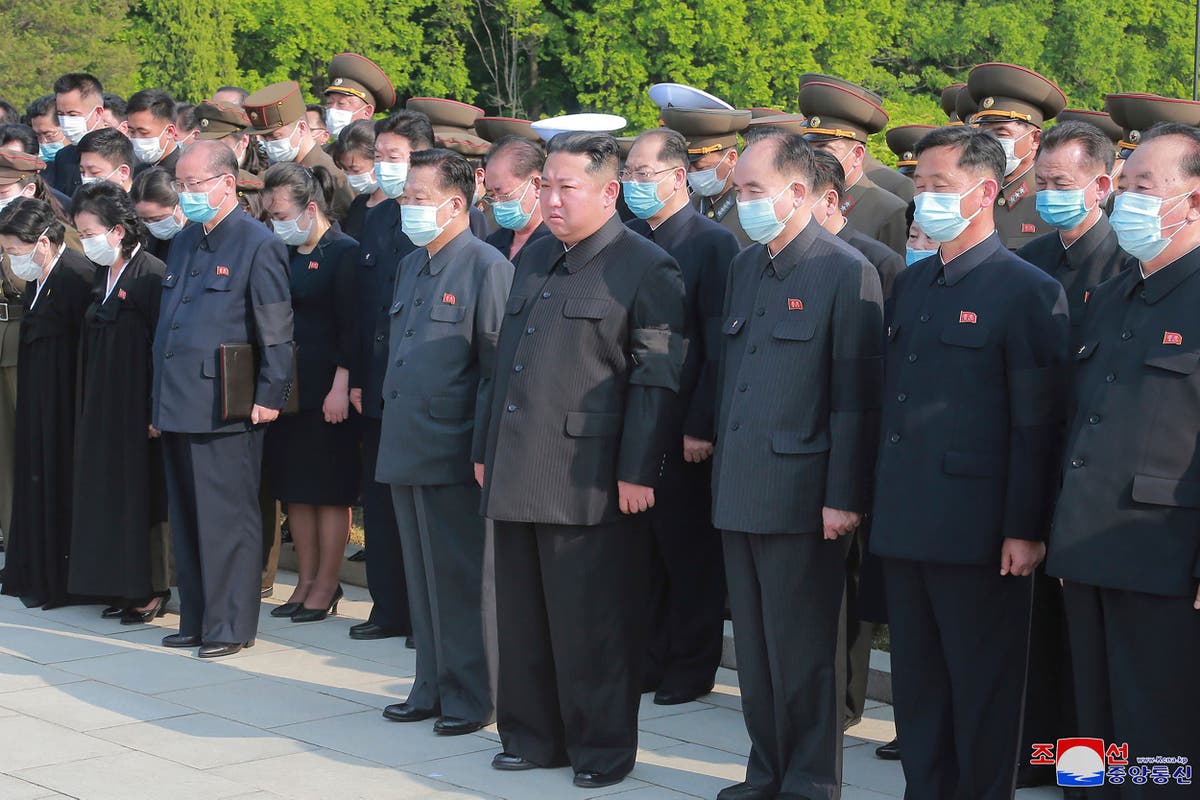 North Korean leader Kim Jong-un was seen without a mask at the state funeral of one of his mentors at the weekend, surrounded by a large crowd of officials despite a Covid-19 outbreak raging in the country.

Donning a buttoned up all-black suit with red stole, Mr Kim was flanked by other top officials and military guards who mostly did wear masks for the funeral of Korean People’s Army marshal Hyon Chol-hae on Sunday.

A key military aide in Mr Kim’s administration, Hyon is believed to have helped groom the leader for his premiership before the death of his father Kim Jong-iI in 2011.

The reason behind Hyon’s death was not immediately made clear by state media coverage.

An emotional Mr Kim was seen throwing earth on Hyon’s coffin, rejecting the offer of a spade in order to scatter the earth by hand. He was also seen carrying the coffin inside the cemetery premises in Pyongyang.

Other military officials and soldiers were seen bowing in honour before the grave after paying a silent tribute.

In his tribute, Mr Kim said “the name of Hyon Chol-hae would be always remembered along with the august name of Kim Jong-il”. The North Korean leader was also seen weeping when he visited a mourning station for Hyon last week.

The funeral came as the country admitted it was suffering a major Covid outbreak for the first time since the start of the pandemic, prompting authorities to launch a nationwide lockdown to bring the cases under control.

A total of 167,650 new cases of “fever” – North Korea’s preferred euphemism for Covid cases – have been reported in the past 24-hour period, down from the peak of about 390,000 reported earlier this month, reported KCNA on Monday.

The country has recorded one death, the report claimed, stating the fatality rate stands at 0.002 per cent.

A report in English said that “all the people of [North Korea] maintain the current favourable turn in the anti-epidemic campaign with maximum awareness, in response to the call of the party central committee for defending their precious life and future with confidence in sure victory and redoubled great efforts”.

Officials from North Korea have not confirmed the status of vaccination and health infrastructure to combat the spread of virus, but with the country denying the presence of the virus up until this month it is thought that the population is almost entirely unvaccinated.

Neighbouring countries China and South Korea have offered assistance with Covid vaccines to help the east Asian nation but have not received a response from Pyongyang.

Additionally, the World Health Organisation has sought more information on the outbreak but said it had not heard back.