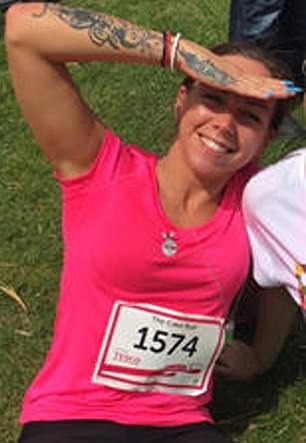 Man, 40, already accused of killing a missing mum, 34, and ‘burning her body’ is now charged with the murder of a second woman, 33, who vanished six months earlier

By Jaya Narain and Martin Robinson, Chief Reporter For Mailonline

A man accused of killing a mother on Remembrance Sunday has today been charged with the murder of a second woman who vanished six months earlier.

Alexandra Morgan, 34, and Leah Ware, 33, who had the same build, height and hair colour, both disappeared in the Hastings area of East Sussex last year.

Today Mark Brown, 40, appeared before Lewes Crown Court via a video link from Belmarsh Prison charged with the murders of both women.

Wearing a grey sweatshirt and grey jogging bottoms, Brown pleaded not guilty to the murder of Miss Morgan, a dog groomer. He was charged with her murder last year.

Danny Moore, defending, told the court Brown’s defence would be that Miss Morgan had died in an accident, but he would admit to trying to dispose of her body by fire.

The 40-year-old did not enter a plea to the charge of murdering of Leah Ware on or around May 7 last year. He was charged with Miss Ware’s murder yesterday.

Alexandra Morgan, 34, (left) and Leah Ware, 33, (right) who had the same build, height and hair colour, both disappeared in the Hastings area of East Sussex last year. Mark Brown is accused of murdering both women

Judge Christine Laing lifted an earlier magistrates court order preventing the reporting of the second alleged murder. Both women are described as around around 5ft 6in, slim, with long brown hair.

Miss Morgan was last seen at around 7.20am on November 14 last year when she put fuel in her Mini Cooper at a petrol station near her home in Sissinghurst, Kent.

She told a cashier she was going to meet someone but failed to return home and was later reported missing by her worried family.

Officers described her disappearance as completely out of character and said she had had no contact with her two children or wider family since she vanished.

Police arrested Brown, 40, of St Leonard’s on Sea, 10 days after she disappeared and charged him with her murder.

But it can now be revealed he faces a second murder charge over the disappearance of Leah Ware, 33. Miss Ware, who was living in the Hastings area, disappeared from her home last May.

The 33-year-old, who had known health problems, was the subject of a missing person appeal as police stepped up their hunt for her.

Police said is was out of character for her not to contact her friends and family.

No friends or family have heard from her since she went missing and no body has been found.

In December Chief Inspector Sarah Godley said: ‘We are increasingly concerned for Leah’s welfare. Leah, who has health issues and may not have access to her medication, has not been in touch with family and friends for some time.’