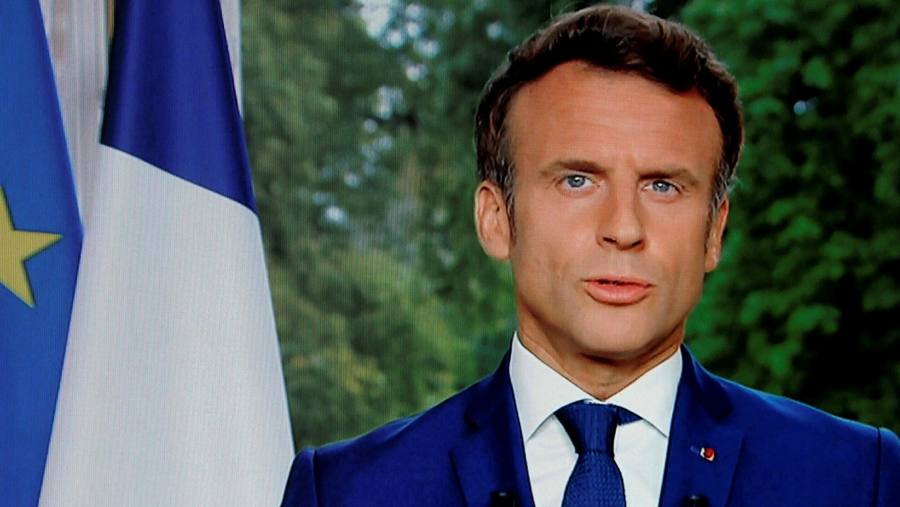 French president Emmanuel Macron has appealed to his opponents to end the nation’s political deadlock by joining his minority government in voting through laws in parliament, though he acknowledged it was not the moment for a broad government of national unity.

“We’ll have to build compromises,” Macron said in a televised address to the nation three days after his government lost control of the National Assembly in legislative elections. “We have to learn to govern and legislate differently.”

In April, Macron became the first French president in 20 years to win a second term, but two months later his centrist political alliance fell short of a majority in two rounds of voting for the assembly. The government now faces two powerful opposition blocs led by politicians of the far left and far right.

Macron said he understood the “fractures and deep divisions” in France but hoped to be able to enact laws with the support of other parties in the coming weeks that would deal with the rising cost of living, accelerate his drive for full employment, protect the environment and help the overloaded health service.

Jean-Luc Mélenchon, the veteran far-left politician who forged a Red-Green alliance that became the largest opposition group in the assembly, rejected Macron’s overtures and said the only way forward was for the prime minister Élisabeth Borne to ask for a confidence vote in the assembly and step down if she failed to win it.

“The executive is weak but the National Assembly is strong,” said Mélenchon.

Since the election on Sunday, Macron has been meeting elected political leaders of all persuasions at the Elysée Palace and trying to persuade them to accept a government of national unity, a governing coalition, or at the very least a series of temporary deals to allows laws to pass.

“What’s on the table is a way of finding a majority so that we can move forward to reform and transform our country,” Olivier Véran, minister in charge of relations with the parliament, said on Wednesday.

Macron’s government was offering “all options” including a broad coalition because “we’re saying the situation is serious and we must be able to unite our forces and find areas of consensus”, Véran told BFMTV.

Without the support of some of his political opponents, including MPs from the conservative Les Républicains or the Socialist party, Macron will struggle to push through any legislation to pursue his economic reforms or tackle crises in France’s health and education systems.

Fabien Roussel, the Communist leader whose party has joined a Red-Green alliance dominated by Mélenchon, said Macron had suggested a government of national unity when he met him on Tuesday. Marine Le Pen, when asked whether Macron had made the same proposal to her as leader of the far-right Rassemblement National, said “yes.” On Wednesday night, Macron said most of the political leaders he met had ruled it out and he did not think it was justified for the time being.

Edouard Philippe, Le Havre mayor and former Macron prime minister who joined forces with the president in the legislative election campaign, described the idea as a “grand coalition”, while François Bayrou, another Macron ally who heads the centrist Modem party, said he had told the president that it was important to go as far as possible in achieving “national unity”.

Macron’s problem is that the two biggest opposition blocs in the newly elected National Assembly are Mélenchon’s New Ecological and Social People’s Union (Nupes), and Le Pen’s RN — groups dominated by hard-left and hard-right nationalist politicians whom the liberal president will find it difficult or impossible to work with.

Véran has already said the minority government does not see itself co-operating with Mélenchon’s La France Insoumise (France Unbowed, the largest component of Nupes) or with the RN on the grounds that they do not have republican values. “Neither extreme left, nor extreme right,” he said.

That leaves the conservative LR and the more moderate parties in Nupes, including the Socialists and greens, but they have all so far proved reluctant to consider striking a deal with Macron except for case-by-case approvals of particular laws.

LR president Christian Jacob said he did not want to block the country’s institutions but his MPs did not want a formal coalition pact with Macron.

“It’s difficult for Macron for obvious reasons to find people to work with in the RN and in most of the Nupes coalition,” said Martin Quencez, deputy director at the Paris office of the German Marshall Fund, a think-tank. “In many cases they got elected on an anti-Macron platform.” But he added: “This is not the end of the story, this is still very much in flux.”