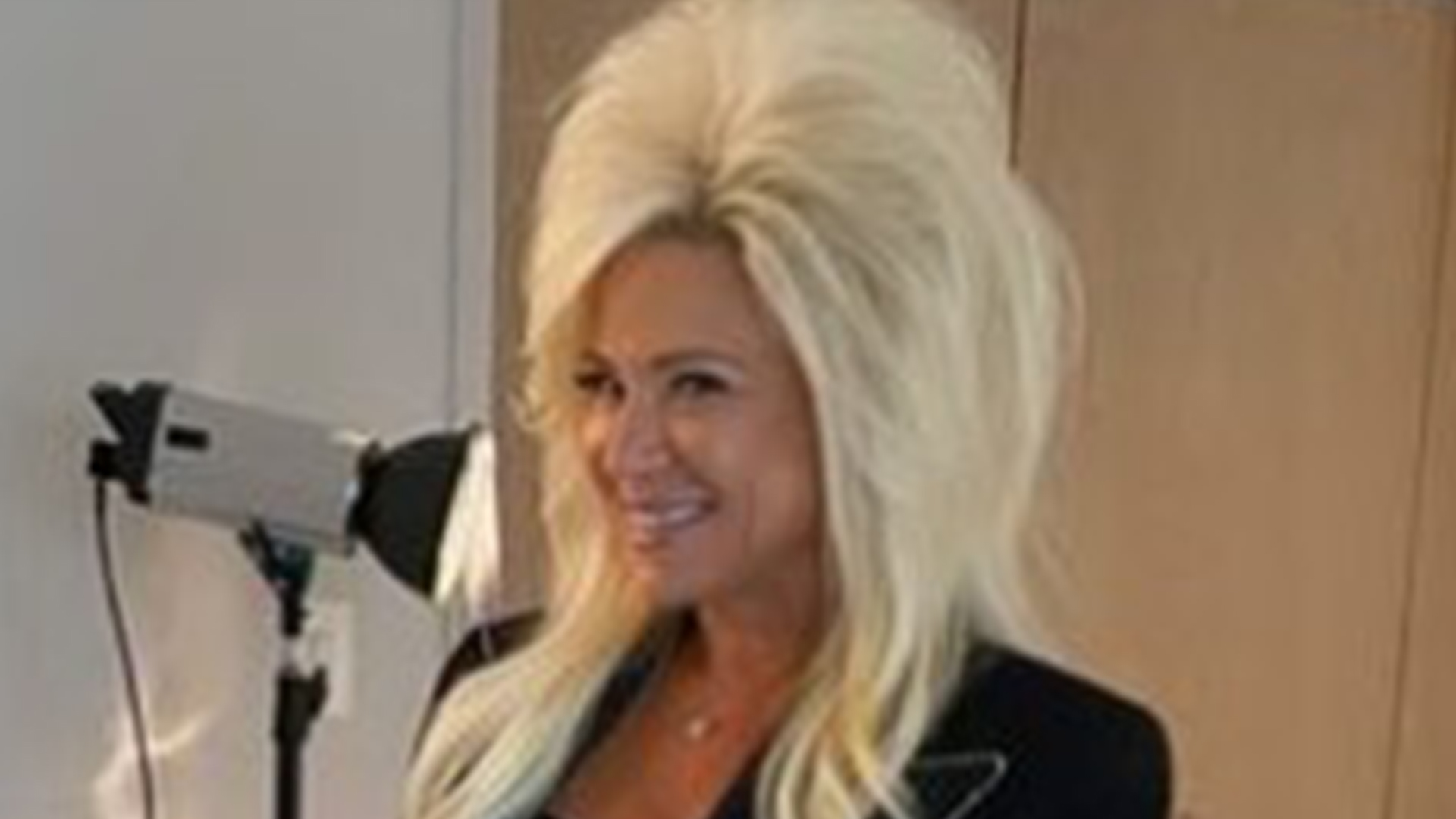 The reality star recently shocked fans by debuting a new hairstyle, ditching the look she’s been rocking for years.

In the photo, Theresa, 56, stook on a set surrounded by lights and cameras.

She had on all black, wearing what looked like a black blazer and shorts that showed off her legs.

Theresa’s hair was sky-high and an almost white blond.

The Long Island Medium star completed the look with a strappy pair of heels, which further accentuated her tan legs.

Theresa then shared a close up, which gave fans a glimpse at the details on her outfit and her shoes.

The photo, shared to her Instagram Stories, revealed feather details around the bottom of her jacket.

It also showed the rhinestone detailing on her heels.

Theresa captioned the post: “It’s all about the shoes shocker lol.”

She appears on the same set in an all-black jumpsuit or top and joggers combo.

She posted a photo to Instagram in which she appeared to be inside the American Dream Mall over in East Rutherford, New Jersey.

The Long Island Medium star crossed her legs while sitting on an extended blue sofa.

She had on a black blazer over her matching blouse, along with a pair of camouflage boots.

The former TLC star carried a purse in one hand as she leaned against the sofa.

However, it was her ’60s-style hairdo with a ribbon tied around the beehive that really turned heads.

The reality star captioned the post: “Love me a day at the mall.”

Fans jumped to the comments sections after they noticed the change in Theresa’s hairstyle.

One said: “You look so young! I hope I look like this when I become a grandma!”

Another added: “Your hair is everything I needed to make today better.”

A third person wrote: “I love this hairstyle on you!” while another agreed and chimed in, “That hairstyle really suits you!”

Theresa is also known for her high hairstyles with volume, but has been trying out different, flatter looks recently.

She previously sported a blinged-out clip on the top of her hair and seemingly longer locks than usual.

Previously, Theresa underwent a hair makeover back in May.

In a sweet photo, the TV star posed with her adorable granddaughter, Michelina Rose.

The two were sitting on the bed while Theresa was packing up for her tour.

Theresa wore an all-black outfit with a gold bracelet and her signature long nails.

The medium went make-up free in the picture and showed off her natural self.

While she’s been playing with her hair as of late, one thing about her hasn’t changed.

Recently, she came under fire for how she was holding her granddaughter in a series of snaps that showed the claw-like nails near the baby.

Followers slammed her sharp and “dangerous nails” as she sat on the couch with her grandchild resting on her chest.

In another pic, Theresa had her long nails close to the baby’s face.

The TV personality’s only daughter Victoria, 27, welcomed her little one in February with her husband, Michael Mastrandrea.

Back in August 2021, Victoria revealed she was expecting a baby with her husband.