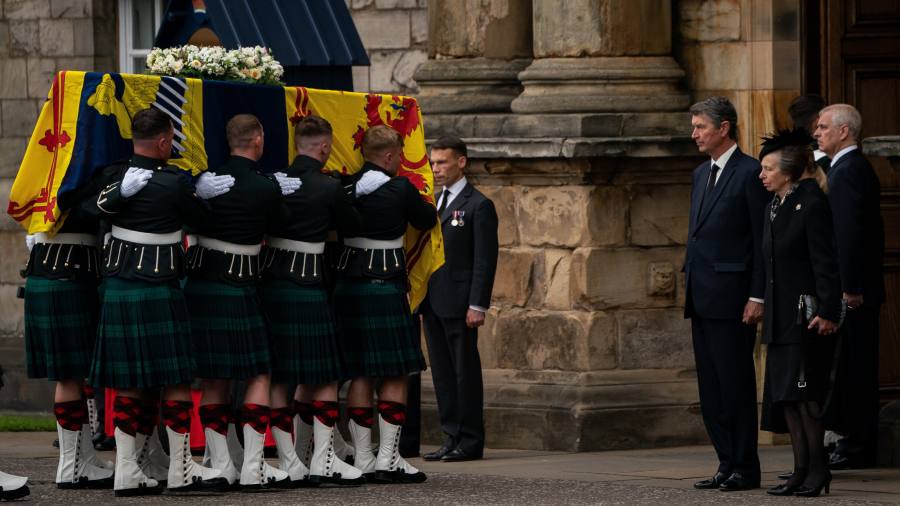 King Charles III will embark on a tour of the United Kingdom this week, in a public show of commitment to the architecture of the UK as it comes under increasing strain.

The new King will address both houses of parliament in London on Monday before embarking on a programme of visits to Scotland, Northern Ireland and Wales.

This will begin in Edinburgh, where the body of the late Queen Elizabeth II arrived on Sunday after a six-hour procession from her Scottish summer retreat of Balmoral witnessed by large crowds along the route.

Liz Truss, the new British prime minister, will accompany King Charles at church services during his tour under the terms of long-planned official arrangements.

However, some constitutional experts warned that her presence risked politicising events designed to cement the King’s pointed promise to serve his subjects “wherever you may live in the United Kingdom”.

During the recent Conservative leadership election, Truss dismissed Nicola Sturgeon, Scotland’s first minister who is pressing for another independence referendum, as an “attention seeker”.

After leading a procession that will take his mother’s coffin up Edinburgh’s Royal Mile to St Giles’ Cathedral, King Charles will meet Sturgeon and join a session of the Scottish parliament involving a motion of condolence.

Sturgeon’s Scottish National party, which seized on Brexit to demand a second independence referendum, has said that voting to leave the UK would not mean removing the monarchy.

But pro-independence analysts questioned the wisdom of allowing Truss to add a political dimension to the King’s first UK tour.

“It’s a strategic mistake for Charles III early on because royalty is meant to be apolitical,” said Gerry Hassan, professor of social change at Glasgow Caledonian University and author of Scotland Rising: The Case for Independence, due to be published later this month.

Opinion polls show the monarchy is less popular in Scotland than in England, though it still has majority support. Recently, backing for an elected head of state has risen significantly among 18- to 24-year-olds.

“The royal family has to reinvent itself the whole time and I suspect the new King and his team will be very aware of some of these numbers,” said Mark Diffley of the Diffley Partnership, an Edinburgh-based polling company. “They will need to work hard to retain their relevance.”

On Tuesday, while the Queen’s body is flown to London, the King will visit Northern Ireland, where politics has also been roiled by fallout from the 2016 Brexit vote that has increased public support for a united Ireland.

Many nationalists and republicans in Northern Ireland greeted news of the new monarch with indifference but some residents reported cheering, clapping and fireworks being let off after the Queen’s death.

Sinn Féin, the nationalist party which is pressing for a united Ireland, did not attend Sunday’s proclamation of King Charles at Hillsborough Castle near Belfast. Leader Mary Lou McDonald said that was “for those whose political allegiance is to the British crown”.

Michelle O’Neill, Sinn Féin’s first-minister-designate in Northern Ireland, has signed a book of condolences for the Queen and appealed for respect. She will meet King Charles with other politicians at Hillsborough.

On Friday King Charles will visit Wales. Until his accession he was Prince of Wales, a title he conferred on his son, William, soon after his mother’s death, to the annoyance of some Welsh nationalists.

A petition that has attracted more than 15,000 signatures said the title was a “symbol of dominance” over Wales which has had an English prince since 1282 when Edward I completed its conquest.

Daniel Wincott, professor of law and society at Cardiff university, said the King’s tour was necessary because of the growing impact of Scottish and Welsh political devolution on the UK’s constitutional balance since the Queen came to the throne in 1952.

“Wales didn’t have a capital city in 1952,” he added. “Even after Cardiff became the capital, the 1969 ceremony for Charles as Prince of Wales was at Caernarfon, which shows how devolution has changed the political landscape.”