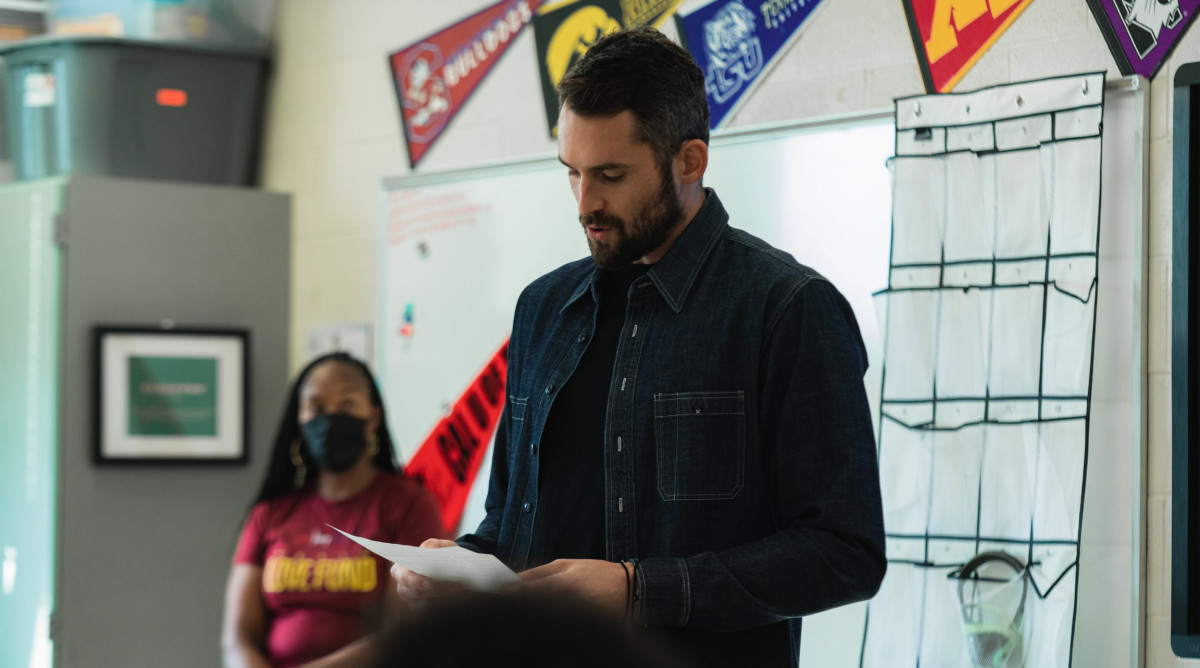 There were 320-plus kids in Kevin Love’s Lake Oswego (Ore.) High School graduating class in 2007. He estimates the school had about one counselor for every 70 students. The five-time NBA All-Star feels his counselor oversaw too many kids to truly understand his depression and anxiety, let alone adequately help him through those feelings. So Love, now 34, came to understand this dynamic, of having to go “down the hall” in school to talk about mental illness and vulnerability, as imperfect, at best.

“I was somebody who learned about sexual education, physical education, but we never really talked about what goes on between the ears and why we may feel these sort of feelings arise even at the kindergarten age or beyond that,” he says.

On Sept. 14, through the Kevin Love Fund, the Cavaliers stalwart formally announced a nationwide expansion of the free mental health curriculum he’s been piloting with teenagers in schools and after-school programs over the last two years. Created in collaboration with educators and experts, it’s a social-emotional learning curriculum of more than a dozen lessons designed to acquaint students with the concepts of being vulnerable and asking for help, as well as destigmatizing their own emotions.

To start, the Fund has focused on high school students, with nearly 10,000 across 250 school and after-school programs in 37 states having recently graduated or begun the curriculum. Love and his team of educators plan to expand into middle schools and colleges, training teachers to relay the lessons, which include students’ expressing themselves in mediums such as photography, creative writing and music.

“I can’t imagine what it’s like going through high school or college or middle school right now, even during the pandemic or post-pandemic in the age of social media and curated social platforms,” Love says. “Just pressure to get into a great college or advance in any way, academically or through sports or through the arts.”

Love has been open about his own mental illness since describing his on-court panic attack in a groundbreaking 2018 Players’ Tribune essay. Around the same time, then Raptors star DeMar DeRozan came forward about his own depression, and together they and others renewed dialogue about how the NBA and sports at large address mental illness.

“My team and I, we always say that mental illness is one of the greatest thieves of human potential, but it certainly doesn’t have to be,” Love says. “Just all of us putting our heads together and understanding the outpouring of support that I got after that public panic attack, we had a chance to do something really special and in figuring out where we can make the biggest impact, we kept going back to those teenage years.”

Interspersed with in-person instruction from students’ own teachers are video clips from the likes of Love, Suns point guard Chris Paul and some faces outside of basketball—including acclaimed actor Bryan Cranston. Love hopes the skills they impart on students will lead them to practice empathy not only with themselves and their peers, but also outside the classroom with families, sports teams and communities at large.

Working on mental health, for Love, is an ongoing process, one he’s carrying into 2022–23. “Always leading up to the beginning of the season, it’s pretty stressful,” he says. “It always feels like cramming for an exam before you head back to your respective city and where you play.”

Ahead of this season, Cleveland retooled by trading for Jazz guard Donovan Mitchell, a three-time All-Star. “We actually share a birthday, so another Virgo is always welcome,” Love jokes. “Any time you have a superstar like Donavan, I think it only catapults you in the right direction and puts you in a different level of contention within the NBA. I think we have the makings of a really great team.”

As a veteran entering his 15th season, Love says he’s his toughest critic. Overall, he tries to simplify his life: He aims to manage his mental illness by attending therapy, keeping to his diet and sleep schedule, and exercising even on his off days.

“I [try to] just keep reminding myself why I love the game and why I still have that youthful hunger that I’ve always had,” he says.