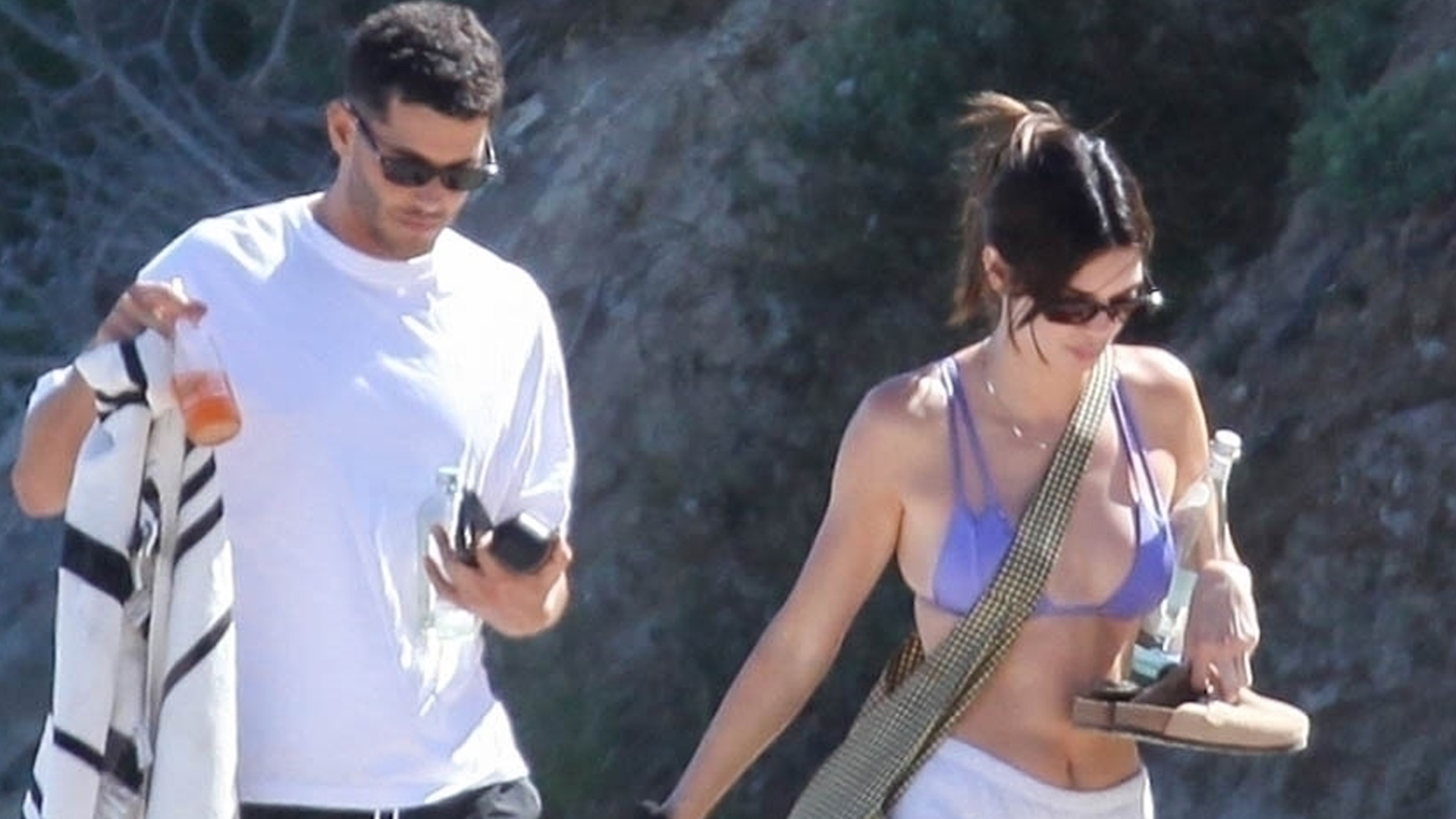 KENDALL Jenner showed off her supermodel physique during a recent beach day, sharing unedited snaps from the summer outing.

The Keeping Up With the Kardashians alum was joined by boyfriend Devin Booker, some close friends, and her pets.

Kendall, 26, kept it casual as she hit the beach in Malibu, California, wearing a tiny blue bikini and a pair of short shorts.

At one point, Kendall slung a bag over her shoulder and carried what looked like a pair of clogs in her hand.

She hid her eyes behind a chic pair of dark shades and smiled as she strolled in the sand with her boyfriend Devin Booker.

While hanging out on the beach, she stopped several times to frolic near the waves with her dogs.

The couple brought the super model’s bestie Fai Khadra along, as well as their two pups.

The model’s NBA star boyfriend kept it equally casual, rocking a white T-shirt and black shorts during the beach outing.

He carried what looked to be an oversized beach towel in his hands.

Devin at one point ditched the shirt, playing in the sand with Kendall and their pups.

Both the athlete and his model girlfriend put their fit figures on full display as they soaked up the sun.

They appeared in good spirits as they walked, played, and relaxed.

The sighting comes amid rumors that the duo had called it quits.

Amid the breakup buzz, Kendall snapped a photo of a fancy dinner with a new man.

The Victoria’s Secret model appeared to be in an empty dining hall, sipping from a glass cup.

She wore a sleeveless gray dress and parted her hair down the center.

Kendall sat next to her friend Fai, who had on a black jacket and white T-shirt.

Fai and Kendall went to Justin and Hailey Bieber’s wedding together years ago.

They also enjoyed a luxury ski trip in January during which they posed for photos together, went on dinner dates, and hit the slopes.

Kendall isn’t the only Kardashian fan spending quality time with Fai, however.

In September 2020, Fai hung out with Kendall’s sister, Kylie Jenner, 24, on a Parisian getaway.

The two shared romantic snapshots from their trip without posting any together.

Kardashian fans recently speculated that Kendall and Ben called it quits after spotting a series of clues.

Kendall and Devin went public with their relationship on Valentine’s Day 2021 after dating for about ten months.

Her followers suggested that there have been various clues on social media that provided proof that the pair has split.

For one, fans alleged that Devin deleted a photo he had of the model from New Year’s Eve.

Another fan claimed the NBA star had unliked tweets about the Hulu star and that his brother, Davon Wade, had allegedly unfollowed her on Instagram.

Split rumors continued to swirl after neither Kendall nor Devin posted anything on Instagram about their second anniversary.

Though they have not commented on the breakup chatter, the two are still following each other on Instagram and are clearly still spending time together.