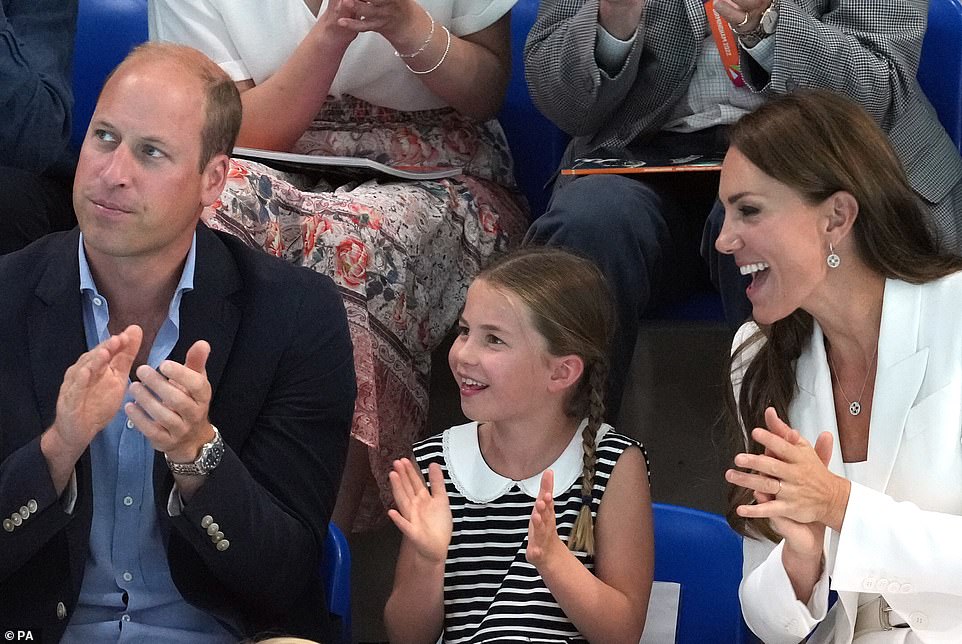 Princess Charlotte was the star of the show today as she joined her parents Prince William and Kate Middleton in Birmingham to cheer athletes competing in the Commonwealth Games.

The Duchess of Cambridge, 40, was in high spirits as she arrived at the tournament alongside her husband the Duke, and their seven-year-old daughter, where they took their seats in Sandwell Aquatics Centre to watch the swimming heats.

The mother-of-three appeared trendy in her £1,945 white Alexander McQueen trouser suit for the event, which she first wore during the Caribbean tour earlier this year.

Meanwhile Princess Charlotte, who was wearing a £44 Rachel Riley dress, appeared delighted to be attended the contest, gesturing wildly to her parents as they sat in the stands.

In a cheeky display, the seven-year-old could be seen clapping along enthusiastically, sticking out her tongue and gasping at moments of action – while her mother tenderly tucked locks of her behind her ear which had fallen from her neat plaits.

The little royal is proving to be quite the sporting fan – days ago, she joined her father for a video message in sending her best wishes to the Lionesses ahead of the Euro 2022 final.

Princess Charlotte, seven, was the star of the show today as she joined her parents Prince William and Kate Middleton, both 40, in Birmingham to cheer athletes competing in the Commonwealth Games today

Thumb’s up for a great day out! The little royal appeared to be having a whale of a time at the event today, offering her father an enthusiastic gesture after the swimming heats

Having a great time! The Duchess could be seen bending low to chat to her daughter during the event (left) before the seven-year-old offered her father Prince William an enthusiastic thumbs up (right)

Feeling tense! Princess Charlotte bit her lip as she and her parents, Kate and Prince William, gave a round of applause at the event in Birmingham

Kate was dazzling in the £1,370 fresh white jacket with matching £575 trousers from her favourite designer Alexander McQueen.

Kate has a close affiliation with Alexander McQueen having worn the British fashion house’s designs on notable occasions, most famously to her wedding in 2011.

The royal swept her long brunette locks back from her face in a bouncy blow dry for the occasion.

Meanwhile she kept her makeup neutral for the occasion, opting for a sweep of dark eyeliner and a touch of lipstick.

Already practicing the royal handshake! The confident seven-year-old chatted with those attending the event in Birmingham today

The Duchess could be seen tucking her daughter’s hair, which was tied back into plaits, behind her ear during the event in Birmingham today

At one stage, the little royal lent across to touch her mother’s arm while they looked at the programme of events for the afternoon

The little seven-year-old, who is proving to be quite the sports fan, appeared delighted to be attending the event in Birmingham today

At one stage the seven-year-old appeared on the edge of her seat while watching the swimming heats earlier today, with her mouth agape  (left and right)

Look Mum! The Duchess of Cambridge leaned in to her daughter Princess  Charlotte, who appeared to be excitedly gesturing during the heats today

While Princess Charlotte was dressed in a striped black Rachel Riley dress, her mother Kate opted for a smart white suit for the outing

The family were joined at the event by the Earl and Countess of Wessex, who attended alongside their children Lady Louise and James (pictured left and right)

The mother-of-three appeared trendy in her white Alexander McQueen trouser suit for the event, which she first wore during the Caribbean tour earlier this year

Keeping her look simple, the Duchess opted for minimal jewellery – but added some glitz to her look with a pair of dangling earrings.

Senior royals are representing the Queen at the Commonwealth Games as she continues to take a step back from royal duties. The monarch, 96, remains in residence in her Scottish home of Balmoral, in Aberdeenshire.

Prince Charles stood in for his mother at the spectacular opening ceremony and was greeted by cheers as he drove into the stadium in an Aston Martin.

Meanwhile Sophie and Edward have made a number of appearances during the competition thus far.

The couple attended the contest yesterday alongside their children Lady Louise, 18, and James, 14.

James and Lady Louise joined the rest of the family for the Queen‘s Jubilee celebrations earlier this year, but have largely grown up away from the limelight.

Keeping her look simple, the Duchess opted for minimal jewellery – but added some glitz to her look with a pair of dangling earrings

The royal swept her long brunette locks back from her face in a bouncy blow dry for the occasion. She kept her makeup neutral for the outing today

Before taking their seats at the event, the Duke and Duchess greeted Prince William’s uncle Prince Edward and his wife Sophie Wessex, and children, with whom they have a close relationship

Kate and Sophie appeared delighted to see one another earlier today, offering a close embrace as they sat next to one another at the games

Lady Louise looked pretty in a pink and blue dress at the event, rewearing a Peter Pilotto gown from her mother’s wardrobe, while James and Sophie showed emotional reactions as they watched the action.

The Countess first wore the pretty Pilotto dress for a trip to the Chelsea Flower Show in May 2015.

Last week, the Countess of Wessex re-wore a favourite blue patterned dress as she joined Prince Edward at the Commonwealth Games on Friday.

Sophie donned a £795 frock from royal-approved designer Peter Pilotto to take in the action across a number of sporting events.

The couple started off with a trip to the gymnastics arena before taking their seats for a rugby sevens match.

Prince Edward put on a particularly animated display, holding his head in his hands as he struggled to watch.

The Duchess arrived with her arm around the little royal, who could be seen gazing around the aquatics centre in Birmingham ahead of the heats