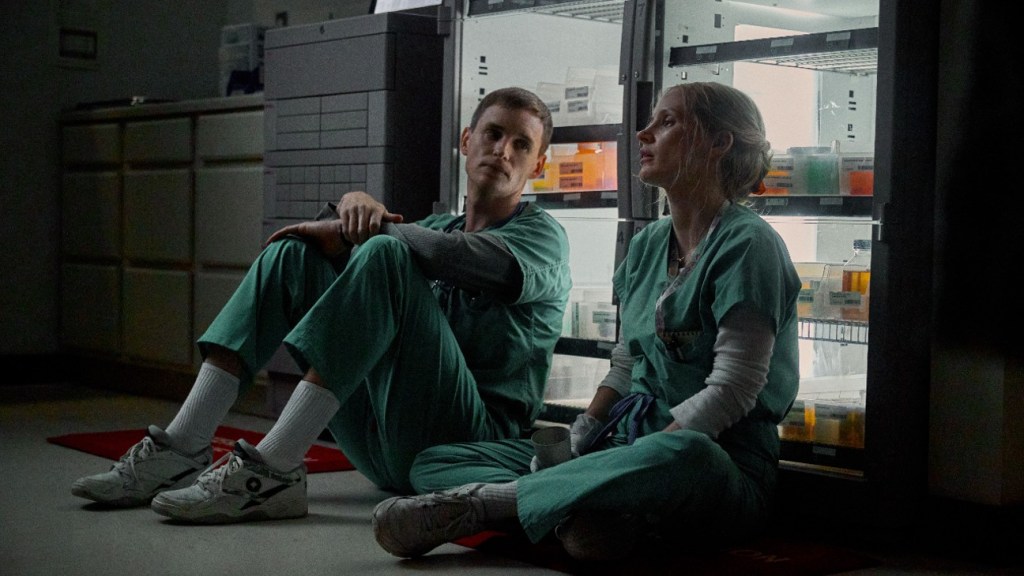 A true-crime picture whose chilling effects are generated without a whiff of the manipulation that often comes with such films, Tobias Lindholm’s The Good Nurse watches as a veteran caregiver (Jessica Chastain) realizes her new best friend at work (Eddie Redmayne) may be killing their patients.

That fact is up front in loglines and promotional materials, which is a shame, because the very fine drama works even better for someone who walks in knowing only the stars’ and director’s names: Such a viewer — who might guess that the “good nurse” in question is Redmayne, innocently caught in a scandal of hospital bureaucracy — feels the drama’s heartbreak more than is possible otherwise. Either way, the picture is an assured English-language debut for Lindholm, a sometime Thomas Vinterberg collaborator and director of Danish films A War, A Hijacking and R.

Chastain’s Amy, a single mother, spends her time caring for others while trying to hide her own ailment: She has a heart disease that causes frequent episodes of difficulty breathing; her doctor says she’s at risk of dying soon from it, unless she gets a transplant. But despite working in a hospital, she’s still several months away from qualifying for work insurance. Paying for a transplant is inconceivable unless she manages to stay on the job, regardless of the pain and stress it causes.

None of Amy’s coworkers notice her difficulty. But new hire Charlie (Redmayne) does, and leaps in to offer help. He slips appropriate meds out of the hospital’s pharmacy, and covers for her when needed. As the two get to know each other, he becomes a beloved and helpful part of her family. Wearing cozy cardigans over his scrubs, he’s so attentive to the comfort and dignity of their patients that it’s hard to imagine him making a mistake, much less doing intentional harm.

But when one of the elderly patients on their floor dies, hospital administrators quickly close ranks, seeming to know they have something big to hide even if they’re not certain what it is. Seven weeks after the death, the company’s risk officer (Kim Dickens, creepily corporate) is forced to alert police to the unexplained event, but keeps using internal investigations as an excuse not to tell them everything she knows. The detectives are flummoxed to learn the body was cremated, so even if there’s suspicion of wrongdoing, there’s no case to pursue.

Warning lights may blink for the viewer when Charlie makes references to previous jobs or towns he lived in. He complains that his ex-wife won’t let him see their children, that workplace pettiness caused someone to make a bogus complaint about him. Redmayne delivers this news like someone who’s omitting details only to avoid embarrassment, or out of modesty, not wanting to be the center of attention. But rumors start circulating about unexplained deaths in other hospitals that employed him.

While Lindholm monitors the coworkers’ friendship, Krysty Wilson-Cairns’ screenplay (based on the book by Charles Graeber) efficiently uses procedural scenes to uncover a rot in this and other for-profit hospitals’ liability-reduction strategies. Since acknowledging their suspicions about Charlie would open the door to wrongful-death lawsuits and maybe more, previous employers would simply fire him quietly, never saying why and never acknowledging any problem to outsiders like other prospective employers. He moved from one job to the next like a child-molesting priest, injecting insulin and other clear drugs into IV bags to cause random, quick deaths.

When Amy finally accepts this as a possibility, she’s forced to play secret agent. Since there’s no body to examine, she has to snoop around for different kinds of evidence, all without spooking Charlie or letting her bosses find out she’s helping investigators. Chastain communicates the agony of this quietly in general, but a couple of scenes make the threat to Amy’s family so clear she looks like she may unravel. For Redmayne’s part, up until the end it’s only settings and circumstances that make him threatening; he’s so even in his air of concern and friendship, you wonder if Charlie somehow sequesters the knowledge of what he does, allowing himself to live most of his day as the ideal nurse he appears to be.

Once the inevitable happens and Charlie must confront police, Redmayne avoids psycho-killer cliches, exhibiting a deep and convincing pain at even being made to think about what Charlie has done. There’s no “we got him!” joy to be had here, especially not when closing titles inform us how many people he killed and note how long he worked without being stopped by those with strong suspicions. If American moviegoers need more reasons to loathe a healthcare system governed by the profit motive, here’s another one. Yet below the corporate suite, healthcare workers continue to do their best — like the real-life Amy, the movie’s actual “good nurse,” who after Charlie’s arrest got back to work and stayed there.