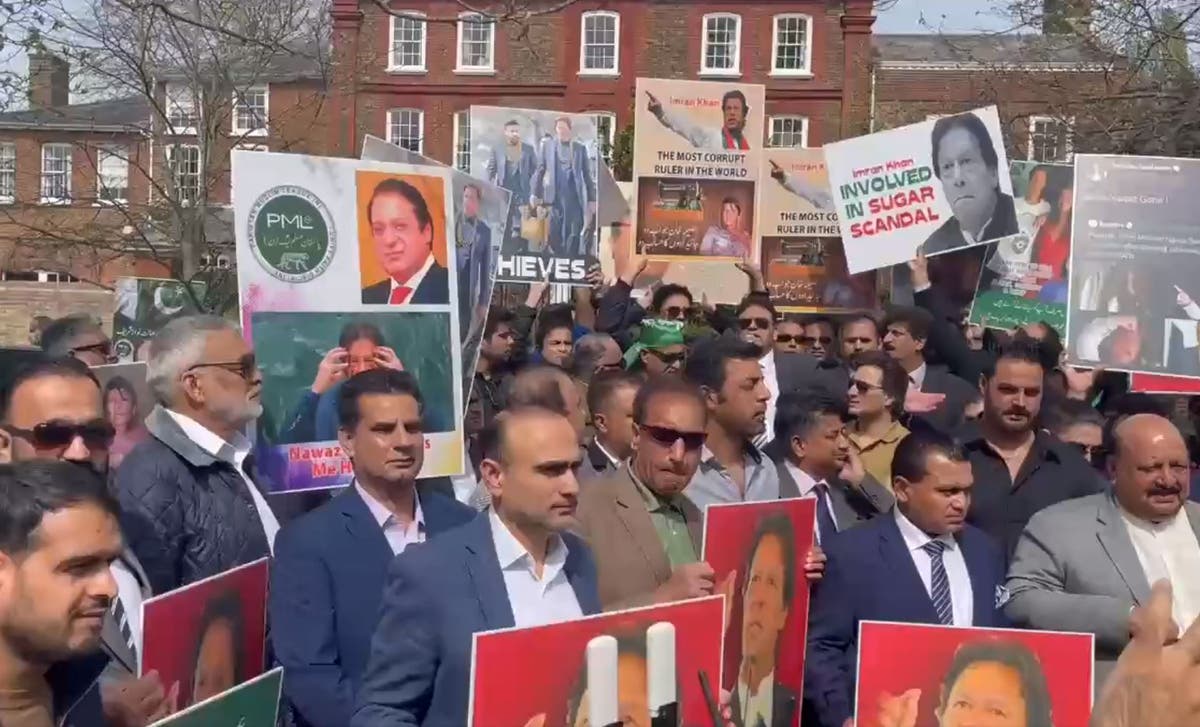 Jemima Goldsmith has condemned protestors who threatened to forced their way into her bedroom in a rally against her ex-husband, the ousted Pakistani prime minister Imran Khan.

Hundreds of people also demonstrated outside her 88-year-old’s mothers’s house in Surrey, the screenwriter and former journalist said.

Pakistan Muslim League (Nawaz) organised rallies on Sunday in response to Khan supporters crowding outside the London home of his predecessor as PM, Nawaz Sharif.

Mr Khan, leader of the Pakistan Tehreek-e-Insaf (PTI) party, was ousted in a no-confidence vote by parliament on 9 April.

PMLN protestors targeted Ms Goldmith, a British screenwriter, because she is the former wife of Mr Khan, though the two divorced in 2004 and she is not involved in Pakistani politics.

She posted a video of crowds outside her mother’s home on Twitter and appealed for the police to intervene.

“This is a video of hundreds of men protesting for hours outside my 88 yr old mother’s house in Surrey yesterday,” she wrote.

“The man with the tannoy is threatening – “If Jemima and her children don’t come down here, then we will enter her bedroom.” @metpoliceuk is this legal?”

Nawaz demanded PTI stop targeting the members of the Sharif family, while outside Ms Goldsmith’s house.

The Pakistan Muslim League’s Zubair Gull said his party was forced to stage the protest outside Jemima’s house to “teach PTI a lesson” that they are not “scared”.

When the screenwriter was made aware of the protest outside her home, she said: “Protests outside my house, targeting my children, antisemitic abuse on social media…. It’s almost like I’m back in 90s Lahore.”

Ms Goldsmith also tweeted that she has been dealing with a stalker who was “arrested at my work place last week and another who breached his restraining order and is being tried in a few weeks”.

The mother-of-three has not made any statements regarding her former husband was ousted from Pakistan’s government, but her brothers Zac Goldsmith, a UK government minister, and Ben Goldsmith have expressed support for Mr Khan.

Surrey Police confirmed oficers were stationed outside Ms Goldsmith’s mother’s home during the protest but no arrests were made.

The Metropolitan Police said it attended Ms Goldsmith’s house in Richmond, southwest London, but made no arrests.