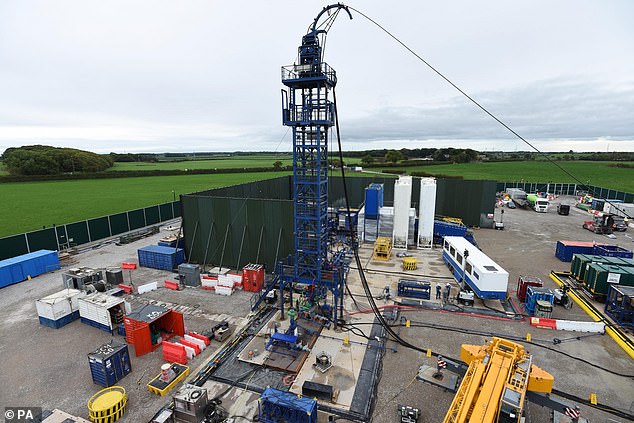 Fracking firms will be permitted to cause bigger earthquakes in a bid to kickstart gas extraction – as the moratorium was lifted in England today.

Jacob Rees-Mogg made clear the limit of 0.5 on the Richter scale will be eased, potentially to 2.5, admitting that otherwise no mining would take place.

Despite Labour accusing him of a ‘charter for earthquakes’ and some Tories voicing fury in the Commons, he told MPs that such tremors are still barely detectable for residents.

The Business Secretary has confirmed the axing of the temporary ban, arguing the move will help bolster energy security following Vladimir Putin‘s invasion of Ukraine.

However, Liz Truss has stressed that any projects will require local support – with suggestions that local residents could get discounts on their energy bills in return for agreeing.

The 2019 Conservative manifesto pledged not to lift England’s moratorium unless fracking was scientifically proven to be safe amid concerns over earthquakes.

The government said today that a long-awaited British Geological Survey review had concluded more evidence was needed – and that required more drilling.

But Tories from areas where fracking could now resume slammed the decision.

Fyle MP Mark Menzies,  said if the Prime Minister ‘is to remain a woman of her word’, then the Government needs to set out how local consent is established.

Responding to Mr Rees-Mogg’s suggestion that opposition was ‘ludditery’, Mr Menzies hit back, saying: ‘There is nothing luddite about the people of Lancashire or of Fylde.

Jacob Rees-Mogg has confirmed the axing of the temporary ban on fracking, arguing the move will help bolster energy security following Vladimir Putin’s invasion of Ukraine. Pictured, the Cuadrilla site at Preston

Mr Rees-Mogg has made clear the limit of 0.5 on the Richter scale for earthquakes triggered by fracking will be eased, admitting that otherwise no mining would take place

Fyle MP Mark Menzies, said if the Prime Minister ‘is to remain a woman of her word’, then the Government needs to set out how local consent is established.

The MP for Blackpool South said many of his constituents have ‘strong objections’ to fracking and also asked how the Government will ascertain whether local support is given, and ‘what incentives if any are going to be provided to local communities to have fracking imposed upon them’.

‘My constituents are understandably anxious about fracking returning to the Fylde coast, so when will they receive an answer to some of these questions?’ he said.

Mr Rees-Mogg said: ‘This will affect some residents much much more than others and therefore it is only right that they are compensated, and that they receive some financial benefit for the inconvenience that they will have.’

He added: ‘The majority of the inconvenience does not actually come from the extraction of shale gas, but it comes from the building of the shale gas well in the first place, and the lorry movements that are associated with that, and it is important that people benefit and are rewarded for doing something that is in the national interest.’

But senior Tory backbencher Greg Knight was among critics in the Commons, warning fracking is an ‘unknown quantity’.

‘The safety of the public is not a currency in which some of us choose to speculate,’ he said.

The technology has been championed by Mr Rees-Mogg, and Ms Truss has said gas could start being extracted within six months. It is widely used in the US but there are concerns the UK is far more densely populated.

On BBC Newsnight, Mr Rees-Mogg said: ‘The seismic limits will be reviewed to see a proportionate level. 0.5 on the Richter scale, which is only noticeable with sophisticated machinery, it is quite right that fracking would not take place, that level is too low.

‘But I can’t confirm a new level, because that is being looked at.’

Ms Truss stressed the need to find new energy sources amid a crisis worsened by Vladimir Putin’s war in Ukraine when asked if she believes fracking is safe, or whether she is breaking a manifesto pledge.

‘The context we’re talking about here is we don’t have enough domestic energy supplies,’ she told reporters travelling with her during a UN summit in New York.

‘Fracking is a part of the energy mix – we should be looking at all options. No option should be off the table to improve our energy security because that’s the number one issue we face.

‘We will not be going ahead with anything that carries a risk but I’m clear that energy security is vital.’

She also stressed that the Government will only authorise fracking in areas where there is local support. It is not yet clear exactly what incentives will be offered.

Shadow minister Ed Miliband said: ‘He says in his written statement laid before this House, tolerating a higher degree of risk and disturbance appears to us to be in the national interest.

‘I look forward to him and his colleagues explaining his charter for earthquakes to the people of Lancashire, Yorkshire, the Midlands, Sussex, Dorset, and indeed Somerset will be part of his dangerous experiment.

‘Let me tell the party opposite: we will hang this broken promise around their necks in every part of the country between now and the next general election.’

The Department for Business, Energy and Industrial Strategy (BEIS) said lifting the ban meant future applications will be considered ‘where there is local support’.

Developers will need to have the necessary licences, permissions and consents in place before they can commence operations.

The Government also published the British Geological Survey’s scientific review into shale gas extraction, which was commissioned earlier this year.

BEIS said the review ‘recognised that we have limited current understanding of UK geology and onshore shale resources, and the challenges of modelling geological activity in relatively complex geology sometimes found in UK shale locations’.

The Government argued that the limited understanding should not be a barrier to fracking, but instead a reason to drill more wells to gather more data.

‘It is clear that we need more sites drilled in order to gather better data and improve the evidence base, and we are aware that some developers are keen to assist with this process,’ a BEIS statement said.

The Government also announced a new oil and gas licensing round, expected to be launched by the North Sea Transition Authority in early October.

This is expected to lead to more than 100 new licences being granted to search for oil and gas in the North Sea.

Environmental groups hit out at the move to lift the ban, with Greenpeace energy security campaigner Philip Evans warning fracking was ‘a dud’.

‘And fracking may not even work at all. Even when the Government went ‘all out for shale’, the frackers produced no energy for the UK but managed to create two holes in a muddy field, traffic, noise and a colossal amount of controversy,’ he said.