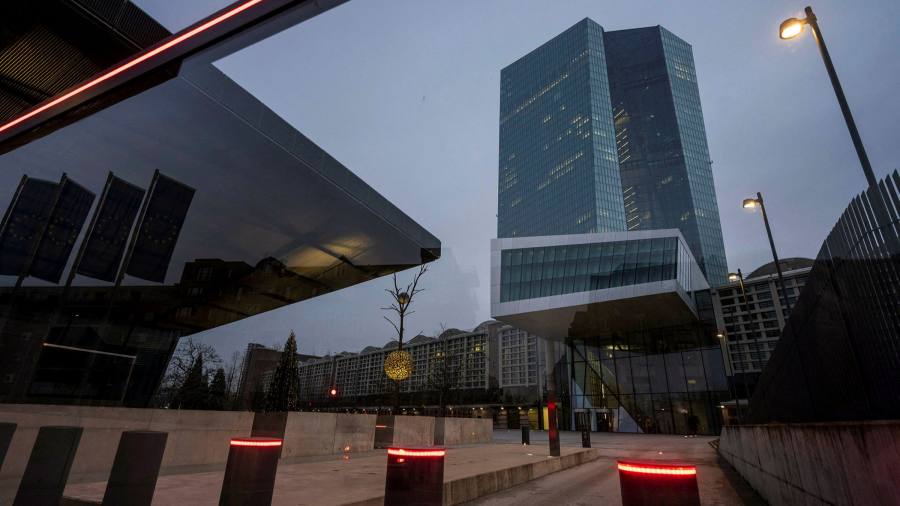 The biggest moves came in the eurozone, where Germany’s 10-year bond yield sank below zero for the first time in a month as markets reacted to a string of comments from senior European Central Bank policymakers arguing against any drastic shift in monetary policy until it becomes clearer how the crisis in Ukraine will affect the eurozone economy.

Derivatives linked to short-term interest rates show that investors now expect the ECB to lift interest rates by less than 0.2 percentage points from the current record low of minus 0.5 per cent by the end of the year. Two weeks ago markets were pricing in a return to zero this year.

US Treasuries were also swept up in the rally, with the 10-year yield falling by 0.12 percentage points to 1.72 per cent, its lowest since late January.

Investors still forecast the Fed to press ahead later this month and deliver its first quarter-point interest rate increase since 2018, but expectations about how aggressively it can tighten monetary policy after that point have moderated.

Traders are now pricing in roughly five rate rises this year, down from six on Friday. Bets that the Fed may even consider a double half-point adjustment, which wound down significantly before the invasion following tacit opposition from two senior officials, have now been fully priced out.

“There’s a big dovish repricing going on,” said Antoine Bouvet, a rates strategist at ING. “The market has taken the view that the implications from Ukraine are that the ECB and other central banks will move more slowly.”

Energy prices have surged since the Russian invasion began last week, adding to the headache for central bankers trying to keep a lid on the highest inflation in decades across many global economies. That leaves the Fed to grapple with both the inflationary impacts of the war and the potential for an economic slowdown.

“This also has a significant impact on growth globally and in the US,” said Rick Rieder, chief investment officer of global fixed income at BlackRock. “This is clearly going to keep inflation high for a longer period of time. But much of these dynamics are not in the Fed’s control.”

He added: “The Fed’s going to have to move but growth will moderate to the point that as you get into the second half of the year I’m not sure the Fed is in a rush.” Rieder said the potential for a slower-moving Fed had made yields on short-term US government debt attractive.

Ahead of next week’s policy meeting, ECB officials said the crisis in Ukraine was likely to push up eurozone inflation from its already record levels by aggravating pressures in energy markets and could lower growth by disrupting trade and hitting confidence of businesses and households.

This marks a shift in tone from the ECB. Several of its officials signalled before Russia invaded Ukraine that they expected it to “normalise” monetary policy by ending asset purchases earlier than planned ahead of an interest rate rise later this year.

The ECB governing council is due to meet next week, when it will publish new economic forecasts that are expected to signal inflation stabilising close to its 2 per cent target over the next two years — a key condition for it to start raising interest rates.

However, the heads of the Greek and Portuguese central banks both said on Monday that the war in Ukraine increased the chances of the eurozone economy suffering a period of stagflation — a toxic mixture of stagnant growth and inflationary supply shocks.

“I am convinced that the traction of growth that the economy was following will prevail,” said Mário Centeno of Portugal, who is an ECB governing council member, while warning: “A scenario close to stagflation is not out of the possibilities that we can face.”

Yannis Stournaras, head of the Greek central bank, said: “We will review the evidence carefully, since we do not want to repeat past mistakes of tightening too early, especially in the face of such an important supply shock like the one caused by the Ukrainian crisis.”

Expectations of a more dovish ECB have also boosted riskier debt in the eurozone. Italy’s 10-year bond yield fell sharply on Tuesday, narrowing the gap with German yields to 1.45 percentage points, from above 1.7 percentage points a week ago.