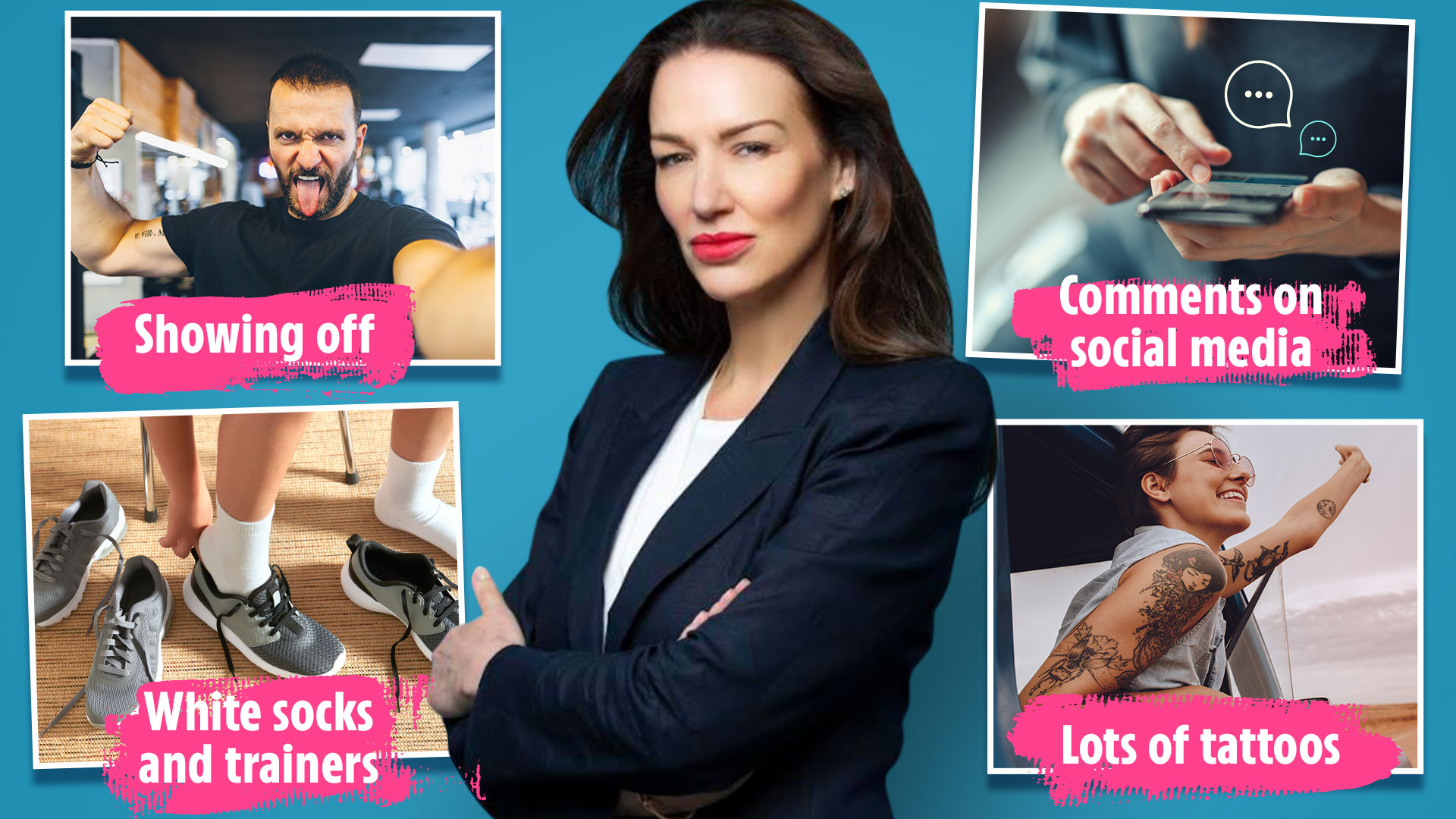 WHEN you first start seeing someone, it can take a few dates before you really know whether there’s potential for it to go somewhere.

But hands up if you’ve ever thought it was going well…only for them to do something that puts you off for good.

Well, it turns out you’re not alone!

Just like Gemma Owen from Love Island, Tina notes that many women find a love interest who wears socks with their trainers a deal breaker.

“Gen-Z’ find it unfashionable and unflattering,” the relationship guru warns.

“Nothing the person wears will make it look good and it can even make you look like a pre-adolescent because socks with trainers give the illusion that you’re shorter than you are.”

Tina also points out that tan lines are also a big turn off so suggests avoiding socks at all costs to save any embarrassment.

But ironically, she points out that in the eyes of a Gen-Z, wearing no socks with trainers at all is just as bad.

“Not only will your outfit appear ‘unfinished,’ they’ll assume you have poor body odour,” Tina explains.

“No socks can also make your ankles look veiny and show the line where you hair may be rubbed off. Big ick!”

Use of first generation internet slang

The relationship guru says: “When you’re talking to a Gen-Z and you use internet slang which appears on TikTok, such as, “pov,” this is accepted.

However, if you’re a fan of using “first generation” slang, most Gen-Z’s will get the ick.”

And according to Tina, three of the biggest icks are “btw”, “brb” and “lol”.

She also warns that overuse of emojis and using them in the wrong place is also a major turn off – adding that data collected at Wingman revealed the use of “lol” with a laughing crying emoji in chats is “too predictable and overused.”

“Gen-z are also put off when slang and emoji’s are used in the wrong places – in addition – grammar and punctuation are important – they hold everything to a high standard,” Tina continues.

“First impressions are key and if you start using old school Internet slang you won’t look hip and they will get the ick.”

Tina points out that no one wants to start dating someone who is too keen. After all, verging on obsessive during early dating scenarios is not a good look.

“It’s best to save romantic comments or gestures for when you’re alone or in private as opposed to on a public platform,” the relationship coach explains.

“If a Gen-z starts being bombarded with comments and likes on their social media it may make them uneasy – a step too far and you’ll be in ick territory very quickly.”

According to Tina, being unique and genuine are both really important qualities to Gen-Z.

She warns: “In a world where everything is fabricated for social media, the appeal to ‘show off’ is a big turn-off.”

Tina reveals that the top two biggest turns off include posing with a car that you can’t afford or that’s clearly a rental and posing for sexy gym selfies.

“You won’t score any points and you’ll look like you’re bragging,” she says.

“It’ll inadvertently do the opposite of impressing and to another Gen-Z it’ll show you have a lack in confidence and crave attention from strangers.”

“It’s not only men who use these names but women too,” she continues. “These types of pet names might be viewed as degrading and risk verging on creepy if overused.”

“These terms are best kept for when you know each other better because then they’ll appear more genuine.”

Tattoos and piercing – no thanks

The relationship expert comments: “Tattoos and piercings are seen as an impulsive decision by Gen-Z’ so they’re put off when they find out a love interest has any ink or an unusual piercing.

“Gen-z class it as ‘too millennial’ and worry about their job prospects as they embark on their careers.”

She goes on to explain that many will go so far as to see it as a deal breaker because they believe it shows the person is insecure about their looks because they’ve found the need to enhance themselves.

When it comes to writing your dating bio, Tina warns to avoid including too much information.

“You’ll simply look like you’re boasting about yourself,” she says. “It’s better to leave some aspects of your life and personality to the imagination rather than your bio reading like an autobiography.”

Instead, Tina suggests asking a friend or relative to write your bio for you – adding that it’ll be much more “authentic and honest.”