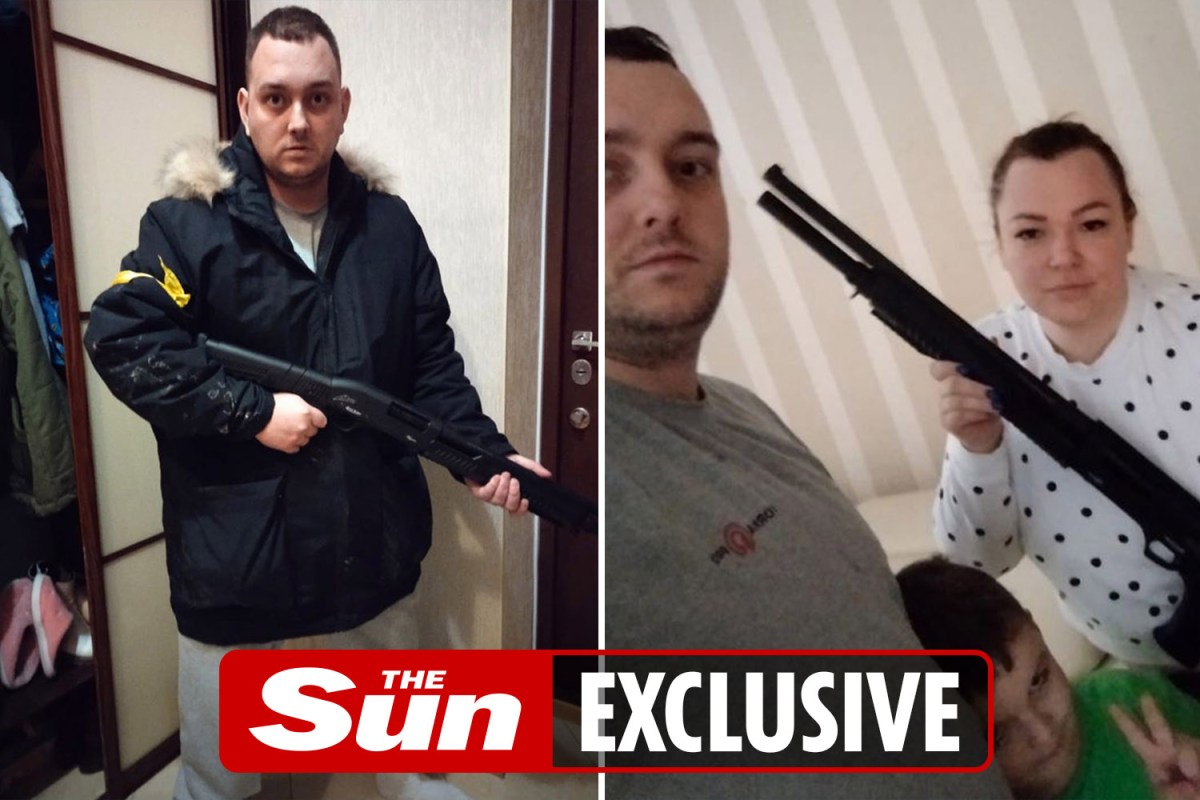 A BRAVE British dad trapped in Ukraine has vowed to fight for his family – telling advancing Russian troops: “If they want a fight, they will get one.”

Wielding a pump-action shotgun, Jacques Quigley, 29, has sworn not to flee the under-siege northern city of Kharkiv.

Instead, he plans to defend his Ukrainian wife Kat, 31, their son Nikolai, five, and their home.

Jacques, from Warwickshire, told The Sun Online: “I’m a British citizen but Ukraine is now my home.

“This is where my son was born. We chose to live here and we’re staying.

“Being armed is the best way of protecting them.

“I can’t believe I’m saying it but there’s every chance there could be guerrilla warfare.

“If they want to come to my door, then they will have a fight. Our family is hard as stone.

“Everyone is at risk of dying. I am trying to do what I believe is right.”

Jacques, an IT worker, met his Ukrainian wife Kat, 31, while working in the USA.

They moved to Kharkiv in 2015, where Nikolai was born.

Kharkiv, with a population of 1.5million, is ordinarily a thriving and dynamic metropolis – a tech hub nicknamed Ukraine’s Silicon Valley.

But the city has been mercilessly targeted by Vladimir Putin with its iconic Freedom Square decimated in rocket attacks.

Thousands of terrified families have made a desperate dash to the Polish border, with some terrified they will never see their relatives again.

Heart wrenching photos show kids in tears as they are forced to leave their parents behind after fleeing their homes.

And emotional dads were spotted kissing their crying children goodbye before putting them on trains to safety before racing back to the frontline.

Jacques and his family have decided to stay, despite being kept awake for days in their apartment as the thud of missiles reverberate.

The piercing sound of tracer fire and rockets rings out constantly, he said.

Jacques, whose parents and sister live in Warwick, says his family are desperately worried about him as the war against Russia worsens.

He said: “My dad told me to get out of there and my sister has been crying because her anxiety has gone through the roof.

“Kat’s parents live in the same city, we cannot abandon them. Her dad has heart problems – they need our support.”

Jacques has urged the UK government to do more to protect Ukraine and backed calls for a no-fly zone to be enforced over the country.

“The Ukrainian army is doing a great job, they’re holding their own,” he added.

“They are not going to give in, they won’t surrender in the face of a tyrant. They are fighting for the future of their country.

“People here are so angry at what’s happening, they are furious.

“He has killed innocent people, families have been shattered, but the people of Ukraine are strong.

“We will survive, we will fight through mentally, physically and emotionally.”

Elsewhere, Russia issued a chilling warning for Ukrainians to flee parts of Kyiv immediately ahead of another massive bombardment.

On Tuesday, a 40-mile column of Russian armour and artillery was pictured on the outskirts of the city, with fears looming of an even heavier onslaught after six days of war.

Russian forces are believed to be aiming to seize the capital and topple the government led by President Volodymyr Zelensky.

In response, Zelensky accused Russia of seeking to “erase” his people, their country and its history.

All you need to know about Russia’s invasion of Ukraine

Everything you need to know about Russia’s invasion of Ukraine…