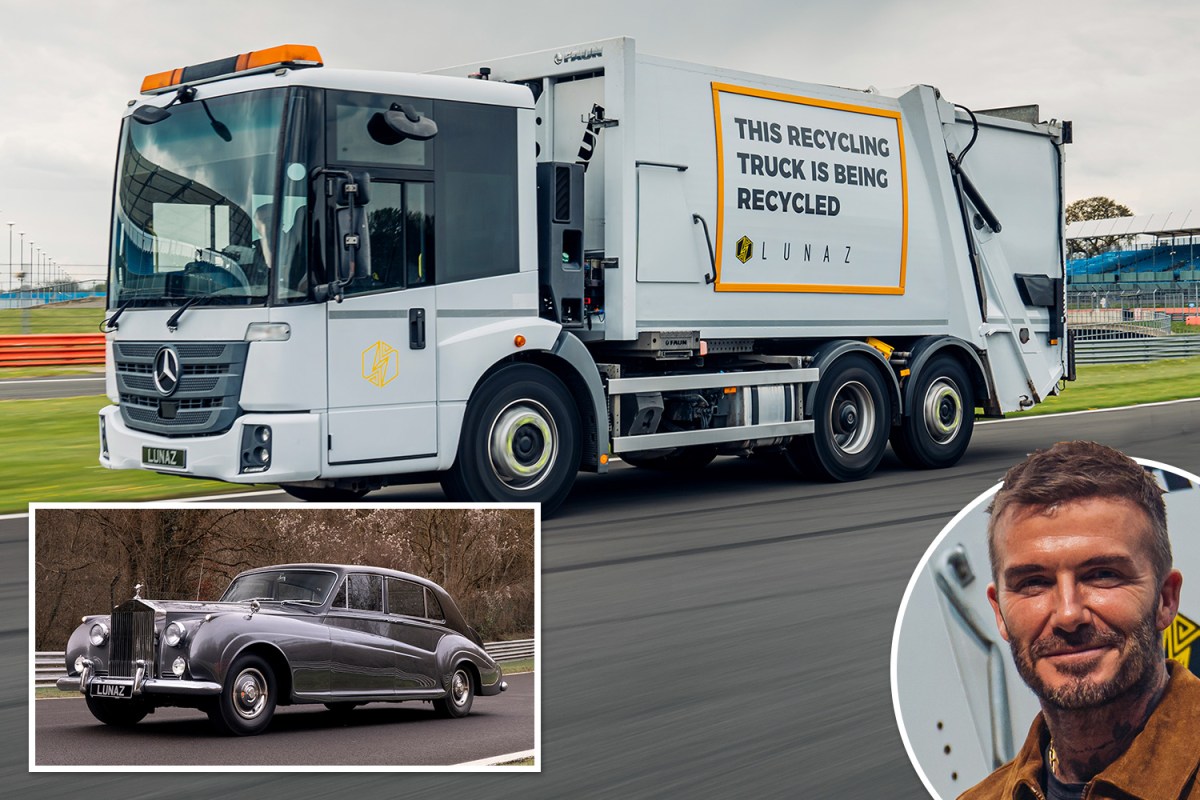 NEXT time you go to a supermarket or a shopping centre have a look at all the cars parked around you.

I’d wager at least 99 per cent of them are petrol or diesel.

The Government in its wisdom wants us all to switch to electric cars from 2030.

But what about all those cars in the car park? What happens to them?

Here’s a fact for you: There are two billion vehicles on the planet right now. Two billion.

Under the short-sighted viewpoint of politicians, all those cars and trucks will have to be scrapped at some point. They will end up in landfill.

But there is another way and there’s an unlikely character who is right behind it.

David Beckham owns ten per cent of Lunaz, which is a company that’s made headlines because it converts beautiful old classics into electric cars.

But actually the main bulk of its work is to convert bin lorries from dirty diesel chuggers to zero-emissions trucks.

Upcycling existing refuse trucks rather than replacing with new is win-win because it’s cheaper and better for the planet.

Councils would save millions of pounds of tax-payers’ cash while cutting carbon emissions far beyond cleaning up local air.

Buckinghamshire Council has already signed up.

Let’s do the maths: A brand new electric bin lorry costs around £500,000, whereas converting an existing diesel truck to electric is 40 per cent cheaper at £300,000. About the same as a new diesel.

Lunaz is scaling up its factory to remanufacture 1,100 trucks a year, saving 44,000 tonnes of embedded carbon from being scrapped versus replacing with new.

The process is all very similar to planes and trains, really.

Just because the 747 you jumped on looks brand new, it was probably built 20 years ago.

It’s just been updated to keep it safe and shiny and extend its life cycle.

“Every vehicle is overhauled so it’s ‘factory new’ and we can put all sorts of upgrades in.

“We’ve got screens that work with gloves on. We’ve got the same guy who is trimming our Bentleys to make the middle seat really comfortable.

“We’ve replaced the wing mirrors with cameras and sensors to increase the safety of workers and cyclists when manoeuvring.”

Plus, every truck can be tailored to a specific route — so it’s not lugging around more battery weight than it needs to.

This next bit tickled me.

The people who have £650,000 to spend on a Lunaz Phantom probably aren’t aware of this. But the bin lorries use exactly the same battery tech as the cars.

The modular electric powertrain — developed by a dream team of engineers from F1 — can be adapted to fit any passenger, commercial or industrial vehicle of any size.

Tucked away near the home of British motorsport at Silverstone, Lunaz has grown from 25 to 100 staff in a year and will top 300 by the end of 2022.

Other factories are planned for the US and Europe.

Lunaz was founded in 2018 by David Lorenz and ex-F1 guru Jon Hilton.

The firm was named after Lorenz’s daughter, Luna.

Beckham said: “I was drawn to the company through their work restoring some of the most beautiful classic cars through upcycling and electrification.

“David Lorenz and his team are building something very special and I look forward to being part of their growth.”

We all know the world is changing.

We all know we need to be more sustainable — and the easiest thing we can do is stop chucking stuff away.

But the best thing about it? Sleep.

There’ll be no more being woken up by the binmen at 6am.

Cheaper and better for planet

ELVIS had one. Mrs Queen had one. John Lennon had two. One with a trippy psychedelic paint job – you know the one – the other pure white.

This 1961 Rolls-Royce Phantom V has been beautifully remastered by Lunaz.

To the untrained eye, it looks like an old Roller. No bad thing. It’s a wonderful shape.

But underneath, it’s better than new.

And, of course, it’s battery-powered so it’ll run as long as there’s electricity.

The silence suits the British elegance perfectly. The 90kWh battery has a range of 230 miles.

Climb inside and it looks and feels and smells authentic.

The owner of this particular car asked for a matte wood finish – rather than the overly-varnished original. It looks amazing.

There’s also a tequila bar, a folding dicky seat (making it an eight-seater), privacy glass separating front and back, and a split-sound system, so James can hear the satnav while you listen to The Beatles or whatever.

Random fact: John Lennon wrote Strawberry Fields in the back of his Phantom.

Everything you see and touch is in the spirit of the original.

The only giveaway is a small digital screen in the driver’s binnacle showing how much juice there’s left.

Now we come to price. It’s not cheap at £650,000 but it’s exactly the kind of thing posh hotels and casinos would use to chauffeur VVIP guests.

Lunaz has 50 conversions in-build right now, ranging from a classic Range Rover at £290,000 to a £1million Aston Martin DB6.

Ten things YOU should know as a car owner