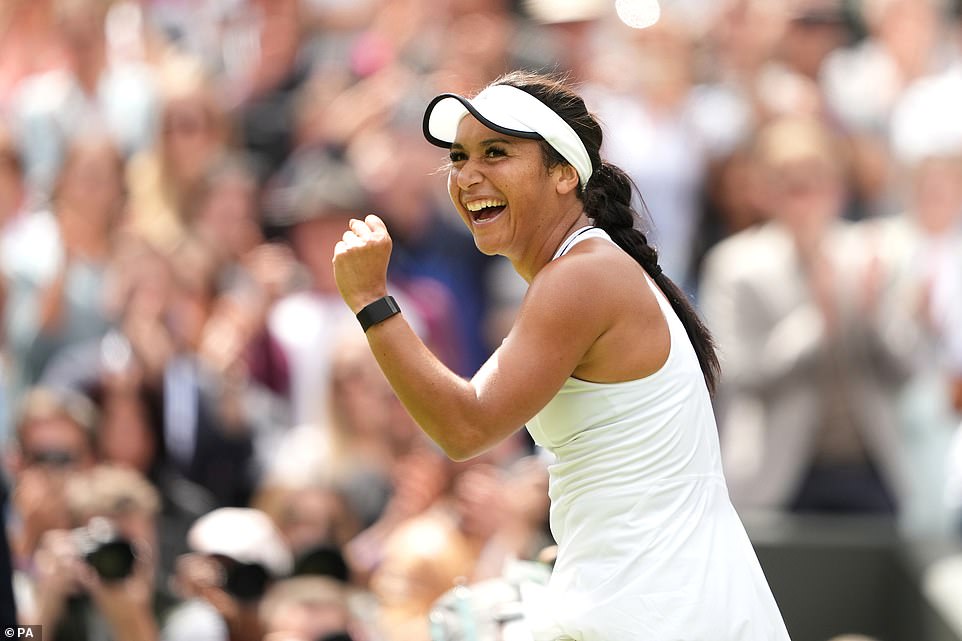 British starlet Heather Watson is through to the fourth round at Wimbledon for the first time after defeating Slovenia’s Kaja Juvan in straight sets.

Court One roared with delight after the 30-year-old from Guernsey beat world No 62 Juvan 7-6 6-2, as she and Katie Boulter raise Britain’s hopes of tennis success at SW19 this year after Emma Raducan and Andy Murray crashed out early.

Love Island fan Watson, whose mother is from Papa New Guinea, has overcome racism, death threats and failed relationships with male tennis players including Lloyd Glasspool to get to the fourth round of a Grand Slam for the first time in her career.

There was a Watson-esque wobble at the end, but she got over the line with her first match point after five deuces, before collapsing to the turf in delight and kissing the court.

The closest she had previously come to the fourth round was at Wimbledon in 2015, when she served for the match against US superstar Serena Williams but lost 7-5 in the third.

An ectastic Watson joked in her post-match interview with the BBC: ‘It wouldn’t be me if there wasn’t a bit of drama at the end. And wow, what an atmosphere. There is nowhere I would rather be and you guys got me over the line. I felt she was playing her best tennis at the end. I wasn’t that nervous. But fourth round for the first time, I’m so happy.’

The Channel Islander can at least treat herself to a day off – doubles notwithstanding – after achieving the rare feat of playing singles on each of the first five days this week, as her previous two matches carried over from the day before.

She will face Germany’s Jule Niemeier, the world No 97, for a place in the quarter-finals next week.

Watson has slipped to 121st in the world rankings and fourth in Britain, and although she has tasted notable success in doubles, she has never been able to sustain a challenge in singles at the top level, her best Wimbledon performances being reaching the third round three times.

She came through an awkward first set full of slices and drop shots against 21-year-old Juvan and did not let her head drop after blowing three set points in the tiebreak before taking it 8-6 on a double fault by the 60th-ranked Slovenian.

Energised, Watson blasted to a 5-0 lead in the second set, adding power and confidence to her groundstrokes, and though Juvan launched a late rally, Watson prevailed to cap a week to remember in which she has been on court five days in a row after her first two matches ran into second days.

The 30-year-old Channel Islander was leading Qiang 7-5, 3-0 late on Wednesday night and all was well with the world. But as darkness enveloped Court 18 she failed to serve out the match and play was called off for the night at 7-5, 5-4.

Asked yesterday whether she turned to her beloved Love Island to decompress, she replied: ‘I actually did to wind down. I slept awful last night because during my match I had to take caffeine to keep up for it when we’re playing at 9pm.’

After all that Watson came out – dosed up on caffeine again – and 14 points and eight minutes later had won 7-5, 6-4.

‘I feel as I’ve gotten older my highs aren’t as high but my lows aren’t as low,’ she said. ‘I’m more level-headed. Making my first third round, I was on top of the world. But I think it’s better being how I am now.’

The beaming Watson could not have cut a greater contrast to Harriet Dart as she lost 4-6, 6-3, 6-1 to No 8 seed Jessica Pegula.

All British players are ‘at home’ at the All England Club but Dart is part of the family – her mother is a member.

This was Dart’s 12th match on grass this year and Pegula’s second, so an upset was on the cards, certainly after the Brit took a 4-1 lead. But Pegula, daughter of the billionaire owner of the Buffalo Bills, found her groove.

Dart became frenetic as she rushed service games and took irate swipes at balls, her bag and the turf.

‘I was missing so many balls, playing pretty average,’ she said. ‘I was getting frustrated. It’s about finding solutions and today I didn’t.’

Heather Watson attending the WTA Summer Party 2019 at Jumeirah Carlton Tower on June 28, 2019, left, and at the WTA Pre-Wimbledon Party at Kensington Roof Gardens on June 23, 2016 on the right

Heather Watson and ex-boyfriend Lloyd Glasspool at the Battle of the Sexes movie premiere in London on October 7, 2017

In the past, British starlet Watson has been forced to overcome death threats and even racist abuse from social media trolls.

‘I have had to deal with a handful of death threats. The WTA takes them very seriously and works with the police to investigate and catch these people,’ she said.

Of the abuse she has received, she said: ‘I’ve been called a monkey and told to go back to the zoo. That hurt. It’s just so disappointing and sad. It’s usually when I lose a match and mostly from men who have gambled on me to win. They pick on my race.’

But added: ‘It’s been easiest to just block anyone who is offensive, but I’d like to see them say it to my face.’

The tennis was speaking to You magazine when she spoke about the threats.

She had been reflecting on the painful split with former boyfriend and tennis pro Lloyd Glasspool last year after their ‘passionate and intense’ two-year affair.

Asked if she would date another player, she said emphatically: ‘Hell, no! It’s just too tough. I would never mix business with pleasure again.’

Watson said the fact that Lloyd was also in the game took its toll, with their busy schedules meaning they had to be content with ‘lots of FaceTiming’.

She admitted: ‘We blew hot and cold, we ended up arguing a lot and I guess we both put our careers first. We didn’t talk for a while. I had to get him out of my system.’

At a recent chance meeting with her ex, ‘we got on like a house on fire, which was annoying, but we’re over and we’ve got to move on’.

She also spoke of the heartbreak at the end of her first serious relationship, which was with junior tennis player turned banker Phil Stephens in 2015.

‘Breaking up was so hard that I didn’t think I would survive,’ she said. ‘Something so painful happened that I had to end it and it took me nearly a year to get over him. I don’t really want to go into it.’