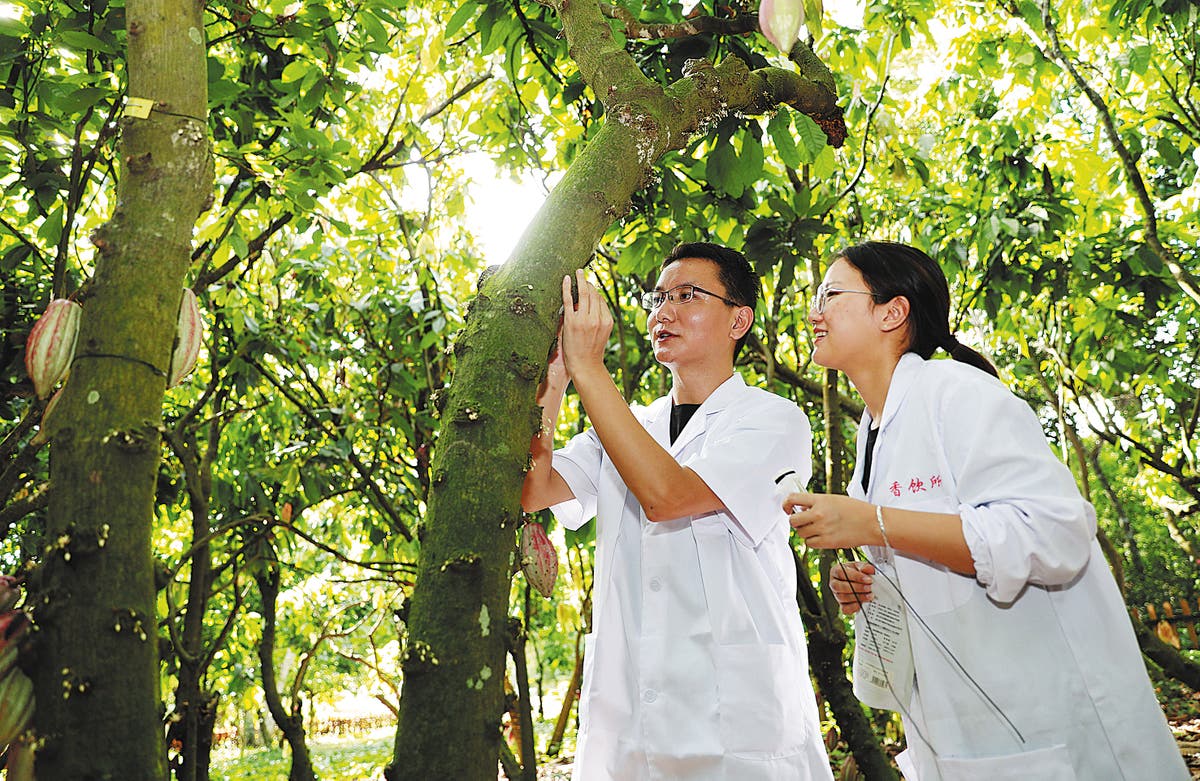 The tropical island province of Hainan in South China has joined the ranks of celebrated places of origin for chocolate. Pierre Marcolini, a world-class master chocolatier, played a big role in this transformation by debuting Grand Cru Hainan chocolates at his online flagship shops in June.

“This is a fantastic grand cru,” he said. “I feel a slight bitterness, very pleasant, without astringency, with notes of citrus and grapefruit. It is extraordinary.”

The Belgian chocolate maker spoke via video about his latest bean-to-bar products made with beans grown in Hainan, a place he said he learned about by chance. Grand cru, French meaning great growth, was originally a classifier for fine wines.

Marcolini, always on the hunt for new resources in his frequent and far-reaching travels, learned about the island in 2017 in the International Journal of Food Properties, a magazine published in the United States. It said Chinese scientists had developed a new variety of cacao in Hainan, a place already known for tropical fruits and economically important plants such as black pepper, vanilla, coffee, pandan, jackfruit, breadfruit, mango, litchi and wax apple. Cacao is the plant that produces seeds from which cocoa and chocolate are made. The seeds are often called cocoa beans.

Late in 2020, 1,100lb of cocoa beans were shipped to Brussels, the world’s premier city for chocolate, from the Xinglong area of Wanning on the eastern coast of Hainan. The humid island environment, which includes vibrant biodiversity, imparted special qualities to the cocoa beans, including fine quality and special textures and flavours. This captivated Marcolini, who asked his representatives in China to look into the bean.

“This was the first time China had exported its locally produced cocoa beans,” said Qin Xiaowei, deputy director of the Spice and Beverage Research Institute of the Chinese Academy of Tropical Agricultural Sciences, and lead author of the article that introduced Hainan to Marcolini.

“The deal showed that the world has recognised our cocoa quality and production standards,” Qin said.

Mark Huestch, a descendant of an eminent family known for their chocolate business in the US, said he was also impressed by the superb quality of the local beans during a recent tour to inspect the planting and fermentation process in Hainan.

“Hainan cocoa beans have a very unique flavour, with strong red fruit and nut flavours,” Huestch said, adding that he would recommend his chocolate products made with Hainan beans to US consumers.

“With a growing number of orders flowing in from food producers at home and abroad, Hainan’s cocoa production simply cannot meet market demand,” said Li Fupeng, director of the Cocoa Research Centre of the Chinese Academy of Tropical Agricultural Sciences, at the Xinglong Tropical Botanical Garden, a base for the preservation of tropical and subtropical plants in China.

While the known cultivation of cacao dates back thousands of years in Latin America, Hainan’s cacao growing can be traced only to the 1950s, when returned overseas Chinese brought in seeds and grew them on farms and in the courtyards of their homes in Hainan.

Over the past 60 years, researchers at the Spice and Beverage Research Institute have established a nursery for 500 varieties of cacao, making China an important base in the protection, evaluation and innovative utilisation of cacao germplasm resources. Twenty-one new varieties have been developed through systematic breeding and artificial hybridisation, boasting high yields, fat content and cold tolerance. The technology and standards for growing cacao in China have reached advanced levels, the Chinese Academy of Tropical Agricultural Sciences says.