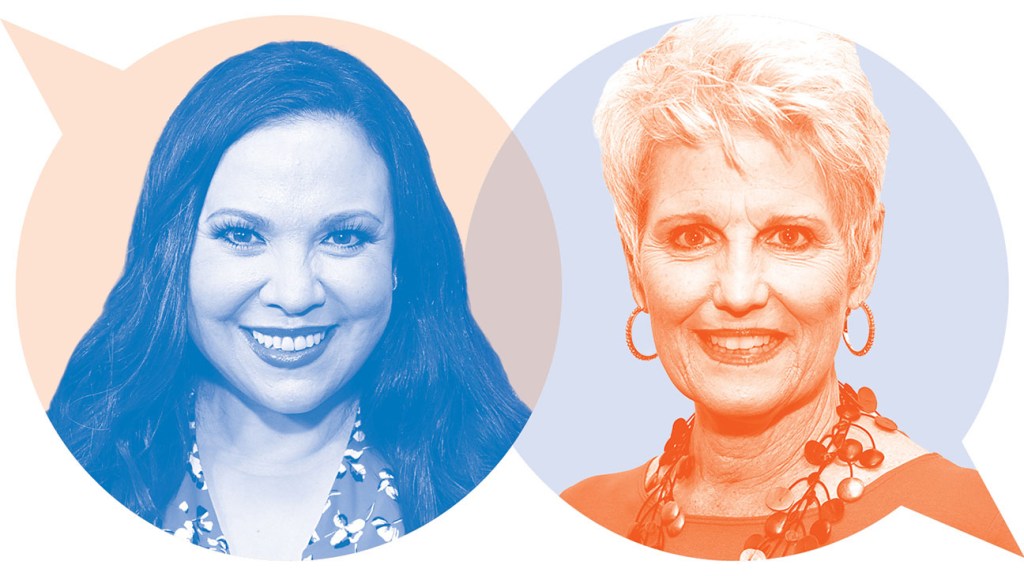 The former was raised in Beverly Hills, daughter of TV comedy icons Lucille Ball and Desi Arnaz, and would go on to become an actress and filmmaker herself, creating a documentary about her parents, Lucy and Desi: A Home Movie in 1993 and appearing in the 2022 Amazon doc Lucy and Desi, directed by Amy Poehler. Calderón Kellett, meanwhile, grew up in Portland, Oregon, as the child of Cuban immigrants, and now serves as a television creator, having worked as showrunner on the One Day at a Time reboot at Netflix and Pop and, most recently, creating the Amazon series With Love.

The women have a key inspiration in common: Desi Arnaz, Lucie’s father and a trailblazing pioneer in Latin American representation on television. What follows is a discussion between the two on how Arnaz paved the way for so many innovations in TV and film — within and outside the context of Latinx visibility and storytelling — and how his legacy has impacted both artists’ work personally and professionally.

GLORIA CALDERÓN KELLETT My grandmother, I think, went to school with your dad in Santiago de Cuba. My dad is from Santiago, and my mother was from Havana, and they came in ’62. There’s an artist and activist, Favianna Rodriguez, who talks about the intersection of culture and how it resonates into pop culture to create change for people, in American perception of other countries. She specifically talks about marriage equality, and how you can literally look at the moment Will & Grace and Ellen’s coming-out happened on television and how it created a path toward people having more favorable and positive relationships with the queer people in their lives. It being something that takes 10 years really resonated with me, because when I came home, I thought, what was the pop culture phenomenon a decade before my parents arrived? And it was that Lucy and Desi were on television — there was a Cuban American with an accent in people’s homes that they loved. The perception was so positive.

It is interesting that in one generation, I did get to go to college, because my parents were given a path to citizenship and were allowed to get loans to buy a house and loans to send me to school. My dad has a flag outside all year round. They love what this country did for them. They’re so grateful. And now to be in a position where I’m seeing how different it is for other Latinos coming here, because the narrative is so different surrounding them and knowing what it did for me … I mean, I really don’t think I’d be sitting here if it wasn’t for Desi.

LUCIE ARNAZ I don’t remember many movies up until that point, certainly no television shows, where there was an “Americanized,” normal, ordinary person who just happened to speak Spanish, just happened to be Latin. He proudly brought that onto the screen. The incredible thing is that he brought that music into Americans’ homes in the early ’50s, when, just months before, he was out on the road. His band would be the relief band for Buddy Rogers and his orchestra. The Buddy Rogers guys would finish and take a break, and they’d go off, and then his band would come on, start to play and everybody would sit down. They wouldn’t dance.

My father, always being the sort of problem-solver that he was, went to Buddy Rogers and said, “Mr. Rogers, I’m thinking that the people are a little bit unfamiliar with our kind of music. If you could do me a favor and start into one of our songs at the end of your set, and then some of our guys will replace your guys little by little until you’re all replaced, and we’ll just keep playing. Maybe they won’t sit down.” And they didn’t. They trusted when they thought it was the Buddy Rogers band. It was this other group of people, and they just didn’t notice that they’d switched them out. Somebody has to start it. I think if he hadn’t brought that, then in the late ’60s, in the ’70s, maybe there wouldn’t have been the Miami Sound Machine and Gloria Estefan and Ricky Martin and all the things that came after that. He was always very proud that he could do that for the Latin community.

CALDERÓN KELLETT Also, to be in a position of power. Owning the studio, all of that stuff. Since Lucy and Desi were on the air, I don’t know that I’ve seen a successful version — I’m married to a lovely white guy. I haven’t seen that story on television since the ’50s! How were they able in that time to make that happen? And we haven’t been able to do it since.

ARNAZ I don’t know why it hasn’t happened since. My mother insisted that if they wanted her on television, they had to allow my father to play her husband, and they wanted her bad enough that she convinced them. [The executives] were saying, “No, no, no, no, they can’t do that.” And she said, “Well, I don’t want to do it if he can’t play my husband, and we’re going to go out on the road, and we’re going to show you guys that it works.” And it did.

Once he was there, he was able to show all kinds of talent that nobody knew he had. When she convinced the network that he could play the part, the network just assumed that they would fly to New York and start filming it there, because that’s where they had the Cinescope cameras. And so he said, “Well, we can film it. We could film the show. We don’t have to do it on tape.” “No, can’t do that. Because we want Lucy to work in front of an audience.” And he said, “Let’s film it, then, in front of an audience.” All these things that had never been done before. And he just kept saying, “Why not?” “You can’t do it” was never a good enough answer. Suddenly there was a three-camera, live-audience, filmed television series. And then everybody else was filming shows like that.

It wasn’t that he started saying, “I have an idea of changing television.” He went, “I don’t want to go to New York” and just put one foot in front of the other after that. That, to me, is the best lesson of how to get through life, just one moment at a time, solve one problem and then go to the next one.

CALDERÓN KELLETT They basically showed them what a proof of concept was for the show. When they were told no, they just put their own proof of concept together, which at the time was to tour. Then it was, “We want to do it this way. We’re going to solve each problem along the way.” Those are such relevant things to take into making anything right now.

I went to school during a time when I Love Lucy [reruns were on TV] when I got home. I assumed that, of course, Cubans are on TV. He sounds just like my dad, and my grandpa, and it just made sense to me. I didn’t know it was rare. Because that’s what was happening in my house. It wasn’t really until I got older and realized: That’s it. There’s nothing else with us.

The first time I heard “Calderón,” my last name, on TV was Miami Vice. The drug dealer. It was a rude awakening. My babysitter was the multicamera sitcom. It felt like a very full circle when I was able to make a multi-cam sitcom about my family and talk about what it is to be Cuban today. And then when I directed Mad About You, that was on the old Desilu lot.

ARNAZ Whether you are a gay person, or Latino, or whatever, and you think you’re so different — and people tell you that, and they make fun of you or just keep considering you as an other and not like them — I think it must be extraordinarily helpful to see a community out there, whether it’s movies or television, that normalizes your way of life.

CALDERÓN KELLETT I remember when I was coming out with season one of One Day at a Time, it was incredibly exciting because my friend Tanya Saracho had Vida, Ilana Peña was making Diary of a Future President, Marvin Lemus and Linda Yvette Chávez were making Gentefied and Gabriel Iglesias was making Mr. Iglesias, and it felt like, “Oh my gosh, this is such an exciting time for so many different perspectives to exist at the same time. This is thrilling.” And all of the shows are gone now. To be talking about With Love, my new show, and not having all of these other Latino perspectives is so disheartening to me. I think there was a bravery that was allowed in the ’70s and ’80s, where there were at least a couple of tastemakers in there who said, “I believe in this, let’s give this a shot.” I’m so invested in the work of people that are taking a swing and are trying to bring out a community that hasn’t [been represented].

Interview edited for length and clarity.

This story first appeared in a June stand-alone issue of The Hollywood Reporter magazine. To receive the magazine, click here to subscribe.