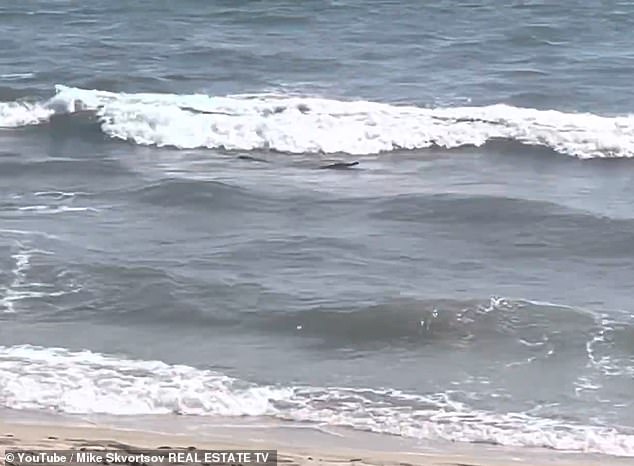 A giant crocodile stalked a frightened British couple holidaying at a resort in Mexico.

The 15-foot beast was seen in the coastal waters four times in a week, causing tourists to scream and flee from the ocean as it circled yards from the beach.

Paul Purdy and fiancée Caroline Morris told The Sun newspaper that they first saw the huge creature in the Pacific waters last Saturday.

The pair were staying at Hotel Riu Vallarta in Nuevo Vallarta, on Mexico’s western coast – around 120 miles from Guadalajara.

Paul, an ex-firefighter, told the newspaper that a lifeguard blew his whistle to alert people on the beach to the danger as the crocodile swam close to the shore.

A gigantic crocodile stalked a terrified British couple holidaying at a resort in Mexico. Pictured: The crocodile is seen floating in the pacific waters off Mexico’s western coast

‘It was terrifying, like a scene from the movie Jaws,’ Mr Purdy, 55, said. ‘We’d only just been in the sea ourselves a few minutes earlier. People were screaming and began to run out of water, there was panic.’

Video from the beach showed tourists looking out over the waters trying to catch a glimpse of the croc. Its long dark form could be seen below the waves, as a police officer riding a quadbike patrolled the sands.

Many tourists seen in the video appeared to have recently been in the water.

Mr Purdy and Ms Morris, 57, said the predator was seen three more times after the first sighting, and red flags were raised to warn people not to go swimming.

‘They should close the beach,’ the father of three told The Sun. Instead, he said, the couple were told it was the responsibility beach-goers to stay safe. ‘It’s nuts,’ he said.

In Mexico, there are established populations of saltwater crocodiles – that can grow up to 20ft in length – in the region where the hotel is located.

The beasts are often displaced from nearby nature reserves by storm surges, and can stray to nearby beaches frequented by tourists.

The British travellers have criticising both the hotel and their travel firm Tui for not closing access to the beach sooner after the crocodile was first spotted.

Paul Purdy and fiancée Caroline Morris told The Sun newspaper that they first saw the huge creature in the Pacific waters last Saturday. They pair were staying at Hotel Riu Vallarta in Nuevo Vallarta, Pacific coast

Mr Purdy, who is still on holiday, said he and his fiancée would remain on the look-out for more sightings of the dangerous creatures.

Tui told the newspaper that encounters with wildlife are out of their control. ‘The hotel team followed all the correct safety measures,’ the firm said.

Last year, US teenager Kiana Hummel fought off a 12-foot-long crocodile while swimming at another resort nearby. The 18-year-old miraculously survived, but was hospitalised in the attack.

In another incident earlier in 2021 – and further south in Mexico – a British woman  saved her twin sister when she was attacked by crocodile.

Melissa Laurie, 28, suffered horrific injuries after she was dragged under water and put into a death grip by the ten-foot predator.

Melissa (left), who narrowly survived being attacked and dragged to the bottom of a lake by a crocodile before her twin Georgia (right), 28, saved her, has been released from hospital

But she was rescued by her twin Georgia who fought off three vicious attacks by punching the reptile repeatedly in the snout.

The sisters had been taken to an unsafe part of the Manialtepec Lagoon – a coastal lagoon about 18 km west of Puerto Escondido in the State of Oaxaca – where crocodiles were nesting by an unlicensed tourist guide on June 6, 2021.

He had assured them it was safe and the sisters were swimming with two friends when Georgia spotted the crocodile. The sisters tried to swim to safety but the predator caught Melissa.