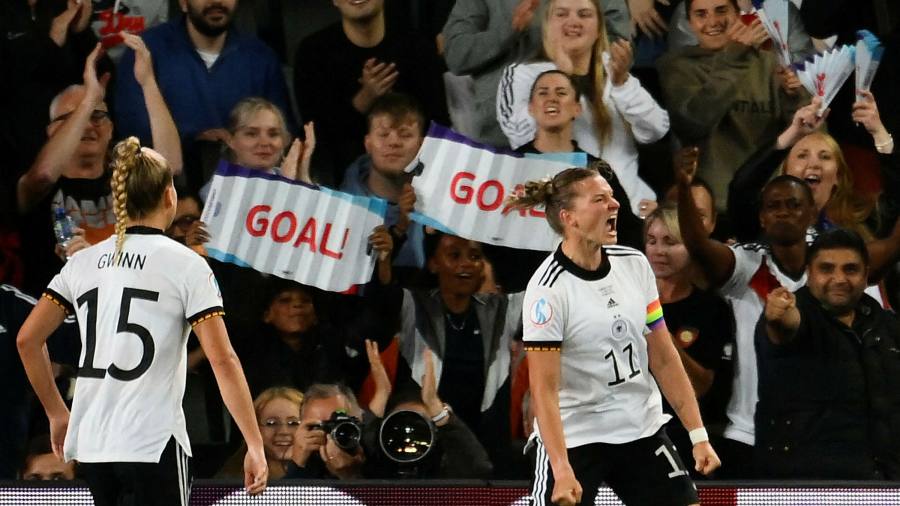 Germany have secured their spot in the Euro 2022 final against host nation England after beating France 2-1 in front of more than 27,000 fans at Milton Keynes.

Germany took an early lead through top scorer and captain Alexandra Popp in a closely fought contest, before France equalised just before the break. With 15 minutes remaining, Popp put the Germans ahead after rising above the France defence to head home from the edge of the six-yard box.

Despite being unbeaten in 19 games under Dutch coach Sarina Wiegman, England’s Lionesses will now face their stiffest test so far. Germany have long been the dominant force in European women’s football, winning eight of the 12 Euro championships since they began in 1984. They have never lost a European final.

Sunday’s contest will be a replay of the 2009 final, in which Germany thrashed England 6-2. A sellout crowd is due to attend the match at Wembley Stadium, London.

“I can’t find any words. We played a crazy game. We threw in everything we had,” Popp told German broadcaster ZDF. “We’re now in the final against England in front of 90,000 at Wembley. To be honest, there’s nothing better.”

The success of the host nation has brought a surge of interest to the women’s game. More than 11mn people watched England’s semi-final win over Sweden on BBC One or via stream.

The longstanding prowess of the German national team has also helped the women’s game build a strong domestic following. Research from Kantar showed that 37 per cent of Germans described themselves as interested in Euro 2022, compared to 28 per cent in France and 29 per cent in the UK.

The quarter final against Austria drew an audience in Germany of 9.5mn — 38 per cent of TV viewers — a record for a women’s Euros match. More than 10mn were expected to tune in to the game against France. The previous record for a Euros match was in the 2017 championship — Germany against Russia, which 7.1mn people watched.

German sports stars are also becoming increasingly vocal in their support of the women’s national team.

After the final whistle on Wednesday night, Oliver Kahn, former captain of the Germany men’s team and now chief executive of Bayern Munich, tweeted: “What an energetic performance, you’ve earned it so much.”

Following victory against Austria, Bastian Schweinsteiger, a member of Germany’s winning World Cup team in 2014, tweeted: “I take my hat off to you, the German women’s team! Super defence and super effective! Congrats!”

Olaf Scholz, Germany’s chancellor, used the championship as an opportunity to agitate for equal pay in football. “We’re in the year 2022. Women and men should get equal pay. That applies to sport, too, especially for national teams. Spain is ahead of us there.”

Overall viewing figures for Euro 2022 have already broken records. Uefa said this week that after England’s quarter-final victory over Spain, total audience numbers were above 164mn for the tournament, beating the previous high set in 2017.

Attendance records were broken during the group stage, with more than 500,000 tickets sold ahead of the first match, although a number of games have failed to sell out.

Uefa also expects the tournament to generate revenue of more than €60mn, almost four times the amount at Euro 2017 in the Netherlands, led by higher ticket sales as well as the rising value of media and commercial rights. This is the first time the organiser has unbundled commercial rights for the men’s and women’s competition.

Despite reaching the semi final for the first time, audiences in France have failed to match the blockbuster levels reached when the country hosted the 2019 World Cup.

About 5.1mn people tuned in to watch France’s quarter-final win against the Netherlands, according to Médiamétrie, slightly more than the 4.9mn for an earlier match against Italy. In 2019, average viewing figures were close to 10mn.

However, there are other signs that women’s football is gaining ground in France. The French football federation reported a 15 per cent increase in the number of women who have signed up to compete for teams from amateur to professional standard, reaching just under 200,000 in the past year. At club level, the Olympique Lyonnais women’s side has won six of the past seven Champions League titles.